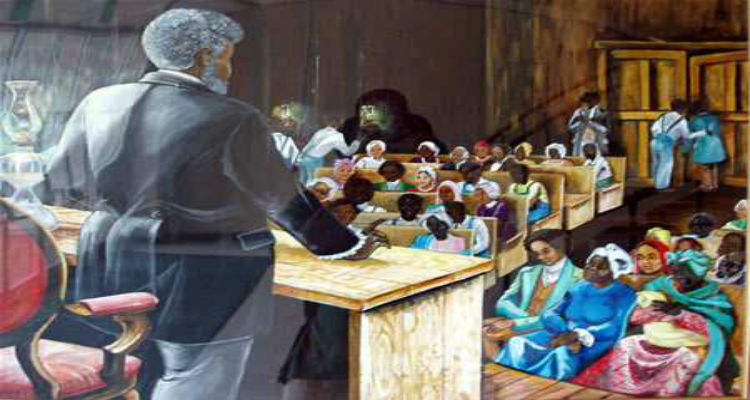 Denmark Vesey (1767 – July 2, 1822) was a free black who masterminded what would have been the largest Maafa (slavery) uprising in American history. A skilled carpenter, Vesey had won a lottery and purchased his freedom at age 32 in 1799. He became an early member and minister at the Emanuel African Methodist Episcopal Church in Charleston, where he used his position as “class leader” to plan the revolt.

Vesey was probably born in St. Thomas, West Indies, which today is the US Virgin Islands. His original name was said to be Telemanque. In 1781 he came to the attention of a slaver, Capt. Vesey, who was “struck with the beauty, alertness, and intelligence” of the boy. Telemaque was purchased at about age 14 by Joseph Vesey, a Bermudian sea captain and slave merchant. After a time, Vesey sold him to a planter in French Saint-Domingue (present-day Haiti). When the youth was found to suffer epileptic fits, Capt. Vesey took him back and returned his purchase price.

Telemaque worked as a personal assistant and interpreter in Maafa trafficking (slave trade) to Joseph Vesey, including periods spent in Bermuda. Following the American Revolution, the captain retired from the sea and Maafa trade, settling in Charleston, South Carolina. When he arrived in Charleston, Telemanque now known as Denmark Vesey, had learned to read and write and was fluent in French and English.

In 1799, Denmark Vesey won $1,500 in a street lottery and used $600 of his winnings to buy his freedom and opened a carpentry shop. Vesey was an highly skilled artisan who became “distinguished for [his] great strength and activity. He was looked up to with awe and respect” by both black and whyte Americans. He acquired property and became prosperous, but could not purchase the freedom of his wife and children. Some claimed that this fact motivated his crusade to destroy the institution of the Maafa.

In 1818, Vesey became an early member and minister at the Emanuel African Methodist Episcopal Church in Charleston. He became a “class leader,” preaching to a small group in his home during the week. The church was temporarily shut down by whyte authorities in 1818 and again in 1820. He began to speak out against the abuse and exploitation of his own people. Vowing never to rest until his people were free, he became a political provocateur, agitating and moving his people to resist their enslavement. He preached from the Old Testament, particularly Exodus, and taught followers that they were the New Israelites, the chosen people whose enslavement God would punish with death.

The strong influence that religion had on Vesey, and Vesey’s biblical education are evident through the song “Go Down, Moses,” which is popularly credited to Denmark Vesey:

In 1822, Vesey and other leaders from the African Church began plotting a rebellion. His chief lieutenant was an East African priest named Gullah Jack, who led conspirators in prayer and rituals and gave them amulets to protect them in battle. Vesey’s theology of liberation, combined with Gullah Jack’s African mysticism, inspired potential participants, and word of the rebellion grew. Vesey set the date for revolt on July 14, and men from Charleston and surrounding plantations planned to seize Charleston’s arsenals and guard houses, kill the Governor, set fire to the city, and kill slaveholders.

Sadly, On May 30, 1822, George Wilson, an Atlantian with a misplaced sense of duty informed his enslaver of a planned insurrection that involved thousands of free and enslaved Blacks who lived in and around Charleston. The planned rebellion was “the most elaborate insurrectionary project ever formed by American [enslaved Blacks].”

Between June 19 and August 6, 1822, the Charleston, SC, Court of Magistrates and Freeholders interrogated, tortured, and tried in closed sessions over 100 African Americans as co-conspirators in a planned Maafa rebellion. Almost all were slaves. The court sent 35 of them to the gallows, two died in custody, and nearly 40 were transported out of the United States.

Vesey was captured on June 22, and he and the conspirators were brought to trial. Despite torture and the threat of execution, the men refused to give up their followers. Vesey defended himself ably at his trial, but he was among the first group of men rapidly judged guilty and condemned to death.

“The author, and original instigator of this diabolical plot…to trample on all laws, human and divine; to riot in blood, outrage, rapine…and conflagration, and to introduce anarchy and confusion in their most horrid forms.”

At his trial, a judge expressed astonishment that a free man would risk everything. One of Vesey’s comrades, quoted him as saying that he was “satisfied with his own condition, being free, but as all his children were [enslaved] he wished to see what could be done for them.”

Vesey was executed by hanging on July 2, 1822. He was about age 55. Gullah Jack was executed several days later, with the total number of executions reaching 35 by August 9th.

After Vesey’s execution, one of his sons, Sandy Vesey, was judged guilty of the conspiracy and was among the many Blacks deported from the United States, probably to Cuba. Another son, Robert Vesey, survived to rebuild Charleston’s African Methodist Episcopal Church in 1865.

In the aftermath of the Vesey rebellion, the African Church was burned down and authorities passed a series of laws further restricting the rights of Charleston slaves. However, Vesey became a martyr for African-Americans and a symbol for the abolitionist movement. Anti-slavery activists began referring to Denmark Vesey as a hero. Frederick Douglass was the first, but not the last, to use Vesey’s name as a battle cry for the first all-black infantry during the Civil War.