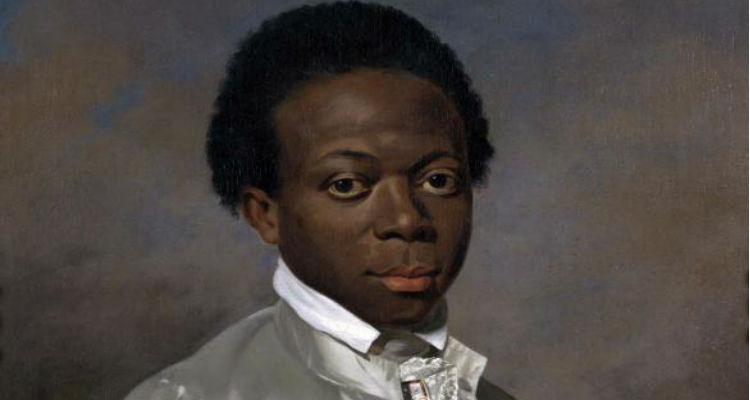 Zamor was a French revolutionary of Bengali origin, who as a boy of eleven, was sold into slavery in the household of Louis XV’s mistress, the Comtesse du Barry? Later he participated in the French Revolution and was imprisoned by the Girondins.

Zamor was born in the town of Chittagong in the state of Bengal (now Bangladesh). In 1773, when he was eleven years old, he was captured by English slavers, who trafficked him into France via Madagascar and sold him to Louis XV of France. Louis XV gave the young boy to his mistress, Jeanne Bécu, Countess du Barry, and he was christened Louis-Benoit.  Bécu developed a liking for the boy and educated him. In her memoirs, she wrote: “The second object of my regard was Zamor, a young African boy, full of intelligence and mischief; simple and independent in his nature, yet wild as his country. Zamor fancied himself the equal of all he met, scarcely deigning to acknowledge the king himself as his superior.”

Zamor developed a taste for literature and was inspired by the works of Rousseau.

Again, from her memoirs: “At first I looked upon him as a puppet or plaything, but… I became passionately fond of my little page, nor was the young urchin slow in perceiving the ascendancy he had gained over me, and, in the end… attained an incredible degree of insolence and effrontery.”

When the French Revolution broke out, Zamor, along with another member of Bécu’s domestic staff, took the side of the revolutionaries and joined the Jacobins. He began to detest Bécu and deplored her lavish lifestyle. He also protested her repeated visits to England with the intention of retrieving her lost jewelry and warned her against protecting aristocrats. Zamor became an office-bearer in the Committee of Public Safety. Using his influential position he got the police to arrest the Bécu in 1792, on her return from one of her many visits to England.

Bécu, however, secured her release from jail and found out that the arrest was the handiwork of Zamor. She gave him three days’ notice to quit her service. This Zamor did without hesitation. Infuriated, he became more vocal and open in his support of the Revolution. He brought further charges against the Bécu, which eventually led to her arrest, trial, and execution by guillotine. At the trial, Zamor gave Chittagong as his birthplace.

Soon after the execution, Zamor himself was arrested by the Girondins on suspicion of being an accomplice of the Bécu and a Jacobin. He was tried and imprisoned. Zamor spent six weeks in prison before his friends managed to secure his release. He then fled from France, reappearing only in 1815 after the fall of Napoleon. Zamor bought a house in Rue Maître-Albert near the Latin Quarter of Paris and spent a few years as a schoolteacher.

Zamor died in poverty on 7 February 1820 and was buried in Paris. His funeral reportedly had a very small attendance.

A two-page comic strip La Rue perdue (The Lost Street) was published in 1978, featuring Gil Jourdan, a detective created by Maurice Tillieux. Set in 1953, it has Jourdan trying to find out why a fake guillotine blade is hanging outside the door of an African friend. The person responsible turns out to be a man obsessed with Madame du Barry and taking his anger at her death out on Jourdan’s friend, who looks like Zamor. The action is set in Rue Maître Albert, where Zamor lived before his death.

An amazing life journey from birth to death