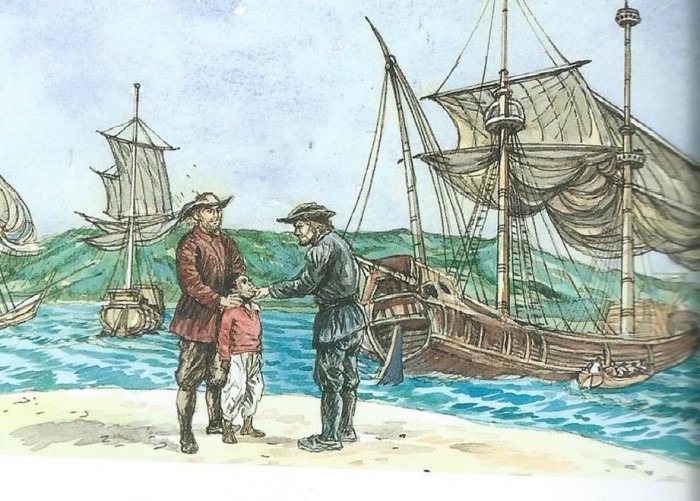 In 1628, the first Black person known to have lived in Canada was a native of Madagascar. He was kidnapped and sold between the ages of 6-9 years old by the British Commander David Kirke during his invasion of New France who sold him for 50 écus to Le Baillif, a French clerk who had entered the service of the English. In July 1632 Le Baillif gave him to Guillaume Couillard. At his baptism this boy had received the Christian name Olivier in honour of Olivier Le Tardiff, the head clerk. When Quebec was handed back to the French in 1632, Le Tardiff, who had often collaborated with the British, was forced to flee.

After again being sold, Olivier received his education at a school run by Jesuit priest Father Le Jeune. He continued to live in New France until his death at about 30 years of age in 1654. He was buried on May 10th, 1654.

At his burial we find him bearing the family name of the Jesuit priest Paul Le Jeune, who had catechized him. In 1638 Olivier was “chained up for 24 hours” for slandering Nicolas Marsolet; he signed his confession with an X. We do not know whether Couillard treated him as an enslaved person or set him free, for in the burial register Olivier is listed as a servant. No text certifies that he was a slave. His situation may very well have been the same as that of the Indian girls Charité and Espérance, whom Champlain was unable to obtain permission to take to France and whom Couillard adopted.

The Maafa (Slavery) was not to be legalized in New France until April 13, 1709, by an ordinance of Intendant Raudot; it nevertheless existed in the 17th century: the word “esclave” (slave) is used in the records of Lachine, on October 28, 1694, to describe René Chartier’s “panis.” The Maafa did start before 1694: the enslaver Pierre Ducharme bought a young panis prior to 1691, and Laurent Tessier’s widow sold an Indian sometime around 1689. The custom on the part of the French of accepting Indian enslaved persons had begun even earlier: in 1674 Louis Jolliet brought from the Mississippi region an enslaved person who had been given him there; in 1671 the Iroquois gave Governor Rémy de Courcelle two Potawatomi enslaved persons to appease his wrath. The Maafa did therefore exist in fact in the 17th century and the ordinance of 1709 merely sanctioned an established practice. One must in addition keep in mind the international principle in force at the time: a “negro” was an enslaved person wherever he might be, unless he had been emancipated.

If Olivier Le Jeune was the first Black person to appear in the St. Lawrence Valley, he had been preceded in New France by the anonymous Black person who died of scurvy at Port-Royal during the winter of 1606–7, and by Mathieu de Coste (de Costa), the Black man of the Sieur Du Gua de Monts, who is supposed to have served in Acadia around 1608.

The Hanging of Angelique: The Untold Story of Canadian Slavery and the Burning of Old Montreal by Afua Cooper (p.71)
http://www.heritagetrust.on.ca/Slavery-to-Freedom/History/Slavery-in-Canada.aspx
http://usslave.blogspot.ca/