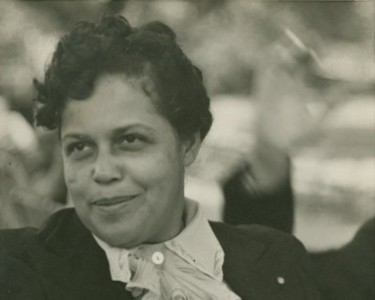 Gwendolyn B. Bennett was an African-American poet, essayist, short-story writer, and artist. Although she never published her own volume of poetry, she was one of the most revered poets of her era, and a major creative force on the Harlem Renaissance.

Gwendolyn B. Bennett was born on July 8 1902 in Giddings, Texas to Joshua Robbin Bennett and Mayme Bennett. The daughter of teachers, she grew up in Nevada on the Paiute Indian Reservation, where her parents taught in the Indian Service for the Bureau of Indian Affairs.  In 1906, when she was four years old, her family moved to Washington D.C., so her father could study law at Howard University. Her parents divorced when she was seven years old. Her mother gained custody but, her father kidnapped her. They lived in hiding, along with her stepmother, Marechal Neil, in various places in the East, including Harrisburg, Pennsylvania and Brooklyn, New York, where she attended Brooklyn’s Girls’ High from 1918-21.

While attending Girls’ High, Bennett was awarded first place in a school-wide art contest and was the first African-American to be elected to the Literary and Dramatic Societies at Girls High School. She wrote her high school play and was also featured as an actress. She also wrote both the class graduation speech and the words to the graduation song.

Bennett studied fine arts for two years at Teachers College, Columbia University, and later at the Pratt Institute in Brooklyn. She also took writing classes at Columbia University, and served as an evening volunteer at Harlem’s 135th Street Library, helping to arrange poetry readings, book discussions, and other cultural events. During her undergraduate education, Bennett’s poem “Nocturne” was published in Crisis in November 1923, and in December of the same year, her poem “Heritage” was included in Opportunity.

This cool night is strange
Among midsummer days…
Far frosts are caught
In the moon’s pale light,
And sounds are distant laughter
Chilled to crystal tears.

In 1925, Bennett received a scholarship to study art in France. During her studies there, she worked with a variety of mediums, including watercolor, oil, woodcuts, pen and ink, and batik. This was the beginning of her development as a graphic artist. However, most of her pieces from this period were destroyed in 1926 in a fire at her stepmother’s home.

On her return to New York in 1926, Bennett became assistant editor of Opportunity magazine. During her time at Opportunity, she received the Barnes Foundation fellowship for her work in graphic design and the fine arts. Her artwork was also used for Crisis and Opportunity covers. Bennett taught design, watercolor, and crafts at Howard University (she was forced to resign in 1927). She was director of the Harlem Community Art Center (1937-40) but was suspended from directing because of suspected communist associations.

Bennett wrote articles, poems and stories for many publications, including American Mercury, Opportunity, Crisis, and Messenger during the 1920s.  In 1926, she was also a co-founder and editor of the short-lived literary journal, Fire!! Conceived by Langston Hughes and Richard Nugent, Bennet served as an editor for the single edition of Fire!!, along with Zora Neale Hurston, John Davis, and Aaron Douglas. The failed publication is now reportedly regarded in some circles as a key cultural moment of the Harlem Renaissance.

Twice widowed, Bennett taught and lived away from New York for long periods. She first married Dr. Albert Joseph Jackson in 1927, and had to resigned from Howard University as the school’s administration disapproved of their relationship. That same year, the couple moved to Eutis, Florida. Her time in Florida had a negative impact on her work as it was too far from Harlem to promptly receive news for her to write about in her column for Opportunity. Jackson died in 1936 and Bennett moved back to New York. In 1940, she became involved in an interracial marriage with Richard Crosscup which was not socially acceptable. She faded from the public eye during the late-1940s although she remained close to the hub of busy Harlem in New York and her fellow writers.

Bennett worked for the Consumers Union during the later years of her life. She retired in 1968 and moved with her husband, to Kutztown, Pennsylvania where they opened an antique shop. He died in 1980, due to heart failure, and Bennett died on May 30, 1981 at the Reading County Hospital.

Most of Gwendolyn Bennett’s published work, including two short stories, appeared in 1923–28. Around thirty of them were published in the Crisis, Opportunity, and a few anthologies, However, her work has not been collected. Her ballads, odes, sonnets, and protest poetry are notable for their visual imagery that explored themes of racial pride and reflected African motifs. Her best-known poem is the sensual “To a Dark Girl,” which encourage Black women to love themselves and aspire to the nobility of African queens.