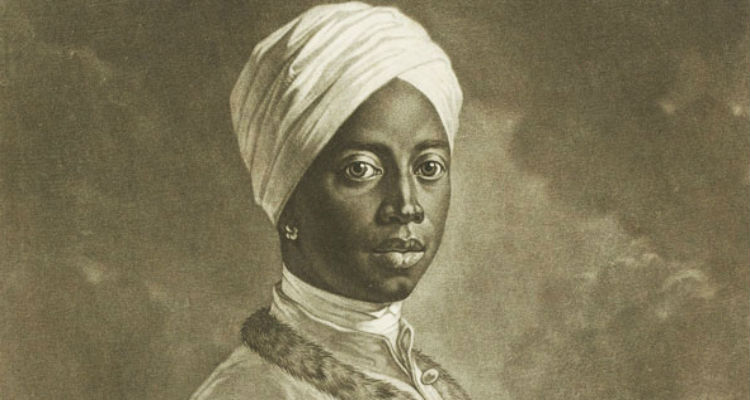 Angelo Soliman who achieved considerable fame as a “Princely Moor” in eighteenth-century Vienna, is historically recognized by some as the “First Moorish Freemason.”

Soliman was born in Africa, around 1721. His original name may have been Mmadi Make, which is linked to a princely class in the Sokoto State in modern Nigeria. At age seven he was kidnapped and brought to North Africa on a Spanish ship. After a brief time, herding camels in a location not precisely specified, young Mmadi Make was sold again, to a Marquise in Messina on the island of Sicily. There, he learned to read and speak Italian, and, during a period of severe illness, he was baptized Angelo Soliman. His first name was an homage to Angelina, an African woman who worked in the household and was very kind to him. Soliman also chose to celebrate September 11, his baptismal day, as his birthday. Fürst Johann Georg Christian Lobkowitz, a friend of the Marquise and an Imperial General for the Austro-Hungarian Empire, began pressuring the Marquise to give him Soliman. The Marquise finally consented, and Soliman became the Prince’s valet and traveling companion, accompanying him on military campaigns throughout Europe and reportedly saving his life on one occasion, a pivotal event responsible for his social ascension. In the service of Lobkowitz, Soliman purportedly learned to write German in seventeen days along with other scholarly achievements.

After Lobkowitz’s death in 1753, Soliman entered the service of Prince Joseph Wenzel Liechtenstein. In 1761 he accompanied Liechtenstein to Frankfurt where Joseph l was selected King of the German Empire. Soliman often acted as an advocate for those submitting requests to the sovereign, and his reputation as a “noble Moor” and a protector of the poor and downtrodden grew rapidly. In 1768, he secretly married Magdelena Christiani. When Liechtenstein heard of his marriage, he released Soliman from his service and expelled him from the palace. Soliman bought a small house in the inner city of Vienna and lived there with his wife and their only daughter Josephine, born on December 18, 1772, spending most of his time tending their small garden. In 1774, two years after the death of Liechtenstein, his nephew and heir Fürst Franz Joseph von Liechtenstein invited Soliman to live in the Liechtenstein palace again in order to oversee the education of his sons. A cultured man, Soliman was highly respected in the intellectual circles of Vienna. He spoke six languages, Italian, French, German, Latin, Bohemian, English.

In September 1781, Soliman joined an elite Vienna lodge of Freemasons known as the “True Concord”. Membership of the lodge included many of Vienna’s influential artists and scholars of the time, among them the musicians Wolfgang Amadeus Mozart and Joseph Haydn as well the Hungarian poet Ferenc Kazinczy. Lodge records indicate that Soliman and Mozart met on several occasions. It is likely that the character Bassa Selim in Mozart’s opera The Abduction from the Seraglio was based on Soliman. He became Grand Master of the lodge, under the name of “Massinissa”, after the famous king of North Africa’s Numidian empire. Soliman’s identification with him indicates a clear awareness of his African ancestry. Soliman helped to change the Freemason rituals to include scholarly elements. This new Masonic direction rapidly influenced Freemasonic practice throughout Europe. Soliman is still celebrated in Masonic rites as “Father of Pure Masonic Thought”, with his name usually transliterated as “Angelus Solimanus”.

On November 21, 1796, Soliman, aged 75 died from a stroke while walking in the streets of Vienna. His body, on the order of Kaiser Franz II, was skinned, and his skin was stretched over a wooden figure meant to imitate that of the living Soliman. For ten years it was exhibited to public view in the Natural History Museum of the Imperial House of Austria. Soliman’s daughter Josephine sought to have his remains returned to the family, but her petitions were in vain. The then director of the museum declared that Soliman’s beauty caused in the then emperor the desire to let him be displayed as a stuffed artifact in his museum. His remains were destroyed in a fire during the 1848 revolution.

I THINK THIS GUY IS MY ANCESTOR!!! THERE IS A PICTURE OF MY FATHER WHO LOOKS EXACTLY LIKE HIS FATHER AND THEY LOOK IDENTICAL TO THIS MAN!!!

We Honor this great man!

Hi Victor,
Angelo Soliman is actually my direct ancestor. I am related to him via Ernst von Feuchtersleben!