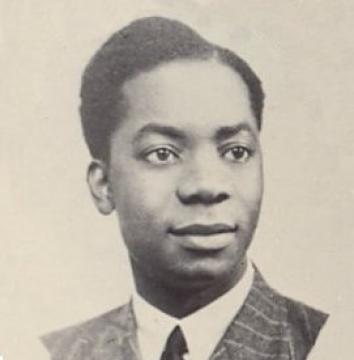 Raphael Ernest Grail Armattoe was a renowned Ghanaian doctor, anthropologist, author, poet, and politician.  His research into the use of the abochi drug against human parasites led to his nomination for the Nobel Prize in Physiology or Medicine in 1948.

Armattoe was born in August 1913 to a prominent family of the Ewe people in Togoland. After the First World War, the country which had been invaded by the Germans was annexed into two mandates, one under French rule and the other British. Thus young Armattoe grew up speaking three European languages as well as his native Ewe, and was later to write and publish works in French, German and English. After receiving basic education at mission schools, in 1930 Armattoe left home to study in Germany. It is thought that the rise of the Nazis in Germany prompted the move to further studies in France. While studying in Europe, Armattoe met a woman from Switzerland, Leonie (later known as ‘Marina’) Schwartz, whom he married.

Having studied anthropology, literature, and medicine in mainland Europe,  Armattoe moved with his wife to Edinburgh, where he qualified to practice medicine in the British Isles. In Northern Ireland, he secured a position as a locum in Belfast and then was appointed to the Civil Defence First Aid Post in Brooke Park, Derry where he worked from 1939-45. After the war, Armattoe had a medical practice at his home; and devoted increased time to writing and public speaking on a variety of topics, mostly concerned with anthropology. Armattoe often issued copies of speeches and magazine articles under the imprint of the Lomeshie Research Centre named after his mother.

Armattoe became more well-known in 1946 when he published his book on The Golden Age of West African Civilization and also made newspaper headlines when he claimed that the Russians had developed an atomic bomb the size of a tennis ball. Armattoe never divulged the source of his information, but his statement was put to the U.S. President Truman at a press conference. The president denied any knowledge of the alleged Russian weapon. The publicity resulted in further speaking engagements for Armattoe, not only in Derry and in Dublin, where he spoke at the Mansion House about “The Advance of Science in the Soviet Union”, but in Sweden and the U.S.

Armattoe later successfully applied for an anthropological research grant worth £3,000 at the time from the Wenner-Gren Foundation for Anthropological Research. In 1948 he returned to West Africa, where he conducted his research. After about half a year of field research, he returned to Derry to write up his reports. Most of the papers published as a result of this research trip were studies of Ewe physical anthropology, especially charting the distribution of blood groups, a field of study that was just emerging into the limelight at the time. Armattoe wrote of studying the ancient herbal medicines of County Donegal, and collected many African plants to study for medicinal applications. He presented his findings in 1949 and was nominated for the Nobel Peace prize for medicine and physiology.

“Dr Armattoe discovered the Abochi drug that saved millions of lives in Africa in the 1940s. It was very efficacious in treating water-borne diseases, ringworms, and other allied diseases. The Nigerian government bought the patent for thousands of pounds and named it Abochi. His research company was known as Lomoshie Research Institute.”

In 1950, the Armattoe family left Derry for Kumasi, where he set up a medical clinic, but also embarked on new adventures in poetry and politics. His two books of poetry, Between the Forest and the Sea and Deep Down in the Black Man’s Mind, are of continuing interest to students of African literature. The poems about his family and about African history are full of love and pride, but many of the poems express the author’s despair with the emergent leaders of the Gold Coast Colony.

Kwame Nkrumah and Armattoe had met at the groundbreaking 1945 Pan-African Congress in Manchester, England. Both were strongly in favor of independence for African nations, but Nkrumah’s vision was more centrist and Armattoe’s more federalist. Armattoe was quick to join the Ghana Congress Party formed in 1952 amid allegations of corruption in Nkrumah’s Convention People’s Party. He also became active in the Joint Togoland Congress, calling for the reunification of the Togoland mandates as opposed to uniting British Togoland with the Gold Coast Colony. Dr. Armattoe traveled to New York in 1953 to address a United Nations committee on the “Eweland Question”. On his way back to Gold Coast, he visited Ireland and Germany. Taken sick en route, Armattoe was treated in hospital in Hamburg, where he died on 21 December, aged only 40 years old.

After his wife received the news of his death, she told friends that her husband had said he’d been poisoned, but she did not know by whom.

A blue plaque in his honor was unveiled by the Ulster History Circle at 7 Northland Road, Londonderry, where Armattoe lived from 1939 to 1945 lived there, and carried on his practice as a GP.