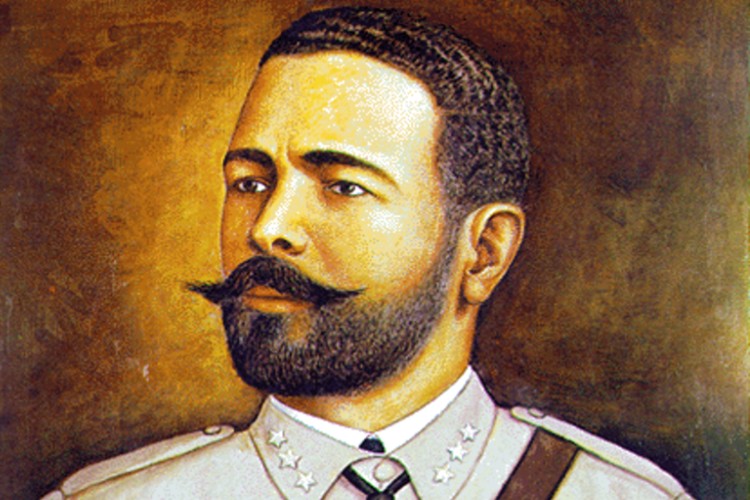 “There can be but one result for the Cubans. That is victory…”

Lieutenant General José Antonio de la Caridad Maceo y Grajales was a Cuban general considered to be one of the greatest heroes of Cuba’s Wars of Independence. Maceo was known as the “Bronze Titan,” as well as the “Greater Lion.“ His personal bravery and qualities of leadership were legendary and led to his meteoric military career; from volunteering to fight in the Army of Liberation as a simple soldier to becoming second-in-command. Maceo never lost a battle until the day he died.

“I know of no man of military standing in the whole of America…that can excel the exploits of Antonio Maceo in the field of battle, as a soldier, during the past hundred years.” ~Arthur A. Schomburg

“General Maceo, the greatest [Black] soldier and general of modern times.” ~ George Edwin Taylor, in his speech accepting nomination as Presidential candidate of the National Labor Party in 1904.

“To Maceo fear was a myth. He was absolutely devoid of the sense we call fear. Every nerve, every sense, so tingled and vibrated with keen foresight, certainty of victory and love for his country that he never gave the slightest heed to personal danger… I loved him best when the lion was dormant and he grew reminiscent. He was one of those immortal characters who cause one to forget for the time that he is but a man. His was a soul of strong magnetism and great character – poetical like all of his race – and ever surrounded by that strength of refinement which denotes genius.” ~J-Syme-Hastings

Antonio Maceo was born in the province of Santiago de Cuba in 1845 (or 1846 or 1848), to a mixed-race Venezuelan-born father, Marco Maceo and an Afro-Cuban mother, Marianna Grajale. Marcos Maceo owned several farms. In Oriente, the eastern part of the island where Maceo was born, the Maafa/Atlantic slavery was less entrenched than in any other section of Cuba. Most people, like the Maceo family, were small independent farmers, in contrast to the wealthier western provinces increasingly dominated by large sugar plantations. Maceo belonged to a family distinguished by a line of brave ancestors. Although free themselves, the family desired still greater freedom for others. In every revolution started on the island for the liberation of Cuba from Spanish control, some member of the Maceo family had participated. The Maceo family viewed Spanish domination as the cause of existing economic hardship, racism and slavery on the island and the entire family was committed to the cause of independence.

When Maceo’s father saw that he would be overtaken by death, he summoned to his bedside his sons and had every one of them take the oath that as long as breath remained in their bodies they would fight against Spain for the independence of Cuba. History shows that they kept this promise. Eight of the Maceo men died in the long struggle and the family as a whole sacrificed everything it owned. The most distinguished of these sons was Antonio Maceo.

Cuba’s first attempt to gain independence was the Ten Years’ War, which started with the call for insurrection by the “Grito de Yara” (Cry of Yara) issued by eastern Cuban plantation enslaver Carlos Manuel de Céspedes, who freed his bondpeople and incorporated them into his rebellion. Maceo and several of his brothers quickly joined the mambises(as the army was called) with the full support of mother Marianna, known as the “mother of the nation” because of her unwavering dedication to Cuban independence.

Maceo fought a guerrilla warfare all the through the ten years war until 1878, under to Commander-in-Chief Maximo Gomez. The two worked closely together during both the Ten Years’War and the War of 1895, and frequently found themselves at odds with the more conservative political leaders of the rebel “republic.” Political leaders tended to oppose Gomez because of his unwavering insistence on the need to extend the war from the East to the economic heartland of the island in the western province.

They opposed Maceo, who had become second-in-command of the Mambi Army and felt threatened by his popularity among Afro-Cubans and the poor in general.  Maceo was wounded 28 times but never lost courage. He defeated Martinex Campos at Demajayabo and at Galeta. In 1878 and he utterly routed Santacledes at San Ulpiano. Maceo’s battalions always freed the bondpeople when they captured sugar mills and encouraged them to join the Mambi army.

It is said that when he was a young boy working on the plantation of Don Leandro, Maceo saw Leandro ordered a slave driver to strip a female to the waist and brutally beat her that she died. One of the first acts when he had an armed band was to go to Leandro’s mansion and punished him in the same way!

Both Maceo and his brother Jose openly proclaimed themselves as Black and both were active in the battle against discrimination in Cuba. Because of this, Maceo’s race was constantly treated as a political issue. During the wars, the Spaniard capitalized on existing racist attitude among Euro-Cubans and spread malicious rumours about secret ambitions allegedly held by Black leaders such as Maceo to establish a Black Republic. These rumors were a factor in undermining the unity of the Cuban revolutionaries. However, the hopes for racial equality also motivated thousands of Black people (including bi-racial people) to join the Mambi forces.

In 1878 when most of the Cubans generals believed that their armies could not defeat the Spaniards, Maceo refused to surrender without winning Cuban independence and the abolition of slavery. He held out in the eastern provinces for months creating terror among the Spaniards by his daring raids. Several times he was surrounded, but when called on to surrender, he would give the order to charge. “That’s the way brave men surrender,” he would say.

Of all Maceo’s achievements, one act in particular made him an enduring hero. The Protest of Baragua in February 1878. When virtually all the poltical leaders and most of the commanders were ready to agree to peace, Maceo alone refused to sign of the Treaty of Zanjón, which ended the Ten Years War. When the Spanish commander offered him money and a high position to yield, he refused. He would not compromise or accept any treaty with Spain. Maceo’s rejection meant that the Treaty came to be understood as no more than a truce; and it strengthened the resolve of his countrymen to renew the war as soon as possible.

Maceo’s next occasion to fight did not come for seventeen years. He left Cuba for Jamaica and became a roaming agitator for independence, visiting Mexico, Costa Rica, the United States and Spanish Honduras. He visited New York late in 1878, to raise funds with which to continue the war against Spain, and was besieged by reporters anxious to meet and interview the famed Cuban leader. The African-American community in New York assembled to pay him honor. Later a leading guest house in New York’s African-American community was named, “Hotel Maceo.”

In August 1879, he met up with General Calixto García in Kingston, Jamaica, to plan the next uprising, La Guerra Chiquita (“The Little War”). Led by García, Maceo’s brother José, and Guillermón Moncada, Maceo was unable to participate because he was in exile. The Mambi army was ill-prepared for another war and García was captured in August 1880 and sent to prison in Spain.

Maceo had only a meagre schooling while a boy. However, during respites in military action, he studied with Dr. Felix Figueredo, who spent hours lecturing him on history, politics, literature, and political science and gave him books to read. During exile, he continued to grow intellectually and politically, developing “his own distinctive social vision that went beyond his patriotic passion at the time of Baragua. By the time he fought again in Cuba, Maceo saw his goals in terms of well-defined concepts of anti-imperialism, social justice and human responsibility.” He also survived various assassination attempts by the Spanish.

Maceo was the first of the leaders to go back to Cuba to renew the fight when The War of Independence — the final struggle for Cuban independence — began on February 24, 1895, in eastern Cuba. Maceo and his brother José, and twenty-one other Cuban revolutionists left Costa Rica and returned to the island on March 31, 1895.

Understanding that a failure to invade western Cuba was the cause of defeat in the Ten Years’ War, Maceo and other leaders made this a priority.

Maceo’s most famous campaign was his invasion of western Cuba when his troops, mostly Afro-Cubans on horseback, covered more than 1,000 miles in 92 days and fought the enemy in 27 separate encounters, burning plantations and spreading destruction.  The Mambi army were finally successful in invading Havana and the westernmost province of Pinar del Río in January 1896.

Maceo achieved great military glory in his western campaign. He inflicted such serious loss on the Spaniards and so weakened them that their power rapidly declined in Cuba. Spain sent General Valeriano Weyler (nicknamed “the Butcher”) to take over the Spanish forces, and his primary goal was to destroy Maceo.

On December 7, 1897, on the outskirts of Havana in San Pedro, a small party of the Mambi army led by Lieutenant General Antonio Maceo y Grajales was ambushed by a Spanish patrol. Maceo was killed; at his side, Panchito Gomez Toro, son of the Cuban Commander-in-chief Maximo Gomez, also died. The surviving Cuban soldiers buried the bodies in a secret grave to protect them from desecration by the Spanish forces.

It is said that his dying words were, “Long live Cuba!”

Maceo was the best known Cuban of his time, and news of his death brought reactions from afar. Newspapers throughout the United States reported it in headlines; African-Americans in particular, mourned. Contribution to the war efforts began pouring into Cuba from the United States, Europe and Latin America in honor of Maceo. Much of the money represented the small savings of poor working people. In Cuba, many refused to believe he was dead. Learning of the tragedy, others fought harder for the cause of independence to which he had given his life.

In 1898, the United States Government intervened because of the destruction of the Maine in Cuban waters and Spain was driven from the Western hemipsheres.

Maceo lives on as Cuba’s greatest nineteenth-century warrior-hero. He is credited with being the author of Cuban nationhood. His greatest moment was the Protest of Baragua, “when Cuba was born as a nation.” “General Maceo…more than anyone else incarnated the rebellion because of his refusal to accept the Zanjon Pact in 1878, and for having continued to struggle against Spain.” He never lost a battle until the day he died.

The death of Antonio Maceo is celebrated annually in Cuba on Memorial Day on December 7th in recognition of his war against Spain.