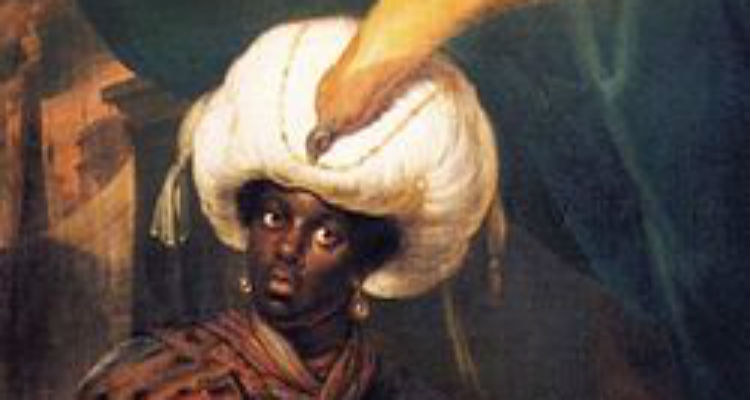 Abram Petrovich Hannibal also Gannibal or Ganibal was stolen from his parents in Afrika and brought to Russia as a gift for Peter I. Hannibal became a major-general, military engineer, governor of Reval and nobleman of the Russian Empire. He is the great-grandfather of Alexander Pushkin, the father of Russian literature.

Hannibal was born in 1696 or 1697 either in the Eritrean highland, north of the Mareb River in a town called Logon or in the principality of Logon in present-day Cameroon. The son of the reigning Afrikan prince, at the age of eight he was kidnapped and taken to Turkey after being sold to Sultan Selim lV at Constantinople. In 1704, he attracted the attention of Count Raguinsky, the Russian ambassador, and was taken away to Russia. The ten-year-old Hannibal, captivated Peter l, who freed and adopted him and raised him as his godson. With Christina, Queen of Poland, as his godmother, Hannibal was baptized into the Christian faith. Peter l gave him his own name but the boy whose real name was Ibrahim wept so bitterly at the change that thereafter he was called Abraham, the Christian equivalent of his own name. Later he assumed the name Hannibal, in honor of the great African military commander from Carthage. 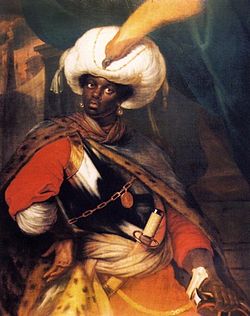 Hannibal had a natural gift for mathematics and engineering. When the Czar visited France in 1716, Hannibal was left behind in Paris to continue an education in the arts, sciences and warfare. By then he was fluent in several languages.

While pursuing his studies war broke out between France and Spain. He fought with the forces of Louis XV of France against those of Louis’ uncle Philip V of Spain and rose to the rank of captain. It was during this time in France that he adopted his surname in honor of the Carthaginian general, Hannibal.

After receiving a head injury, Hannibal returned to Metz to further his education at a new artillery school. In Paris he met and befriended such Enlightenment figures as Denis Diderot and Voltaire. Voltaire called Hannibal the “dark star of the Enlightenment”. In 1723, Hannibal returned to Russia, where he was met by Peter l, himself, a few miles from Moscow. Hannibal became an officer in the engineer’s corps, winning rapid promotion on his own merits.

About this time his people in Afrika discovering his whereabouts sent a rich ransom for him but he refused to leave. Peter l appointed him tutor in mathematics to the crown prince, later Peter ll. As this post gave him considerable influence with the future leader, he became a man of importance to those who engage in court intrigue. As a result of this, fate would turn against him after the death of Peter l for the next sixteen years.

Prince Menshikov who gained power in Russia disliked Hannibal and was suspicious of his foreign origins and brilliant education. Hannibal was exiled to Siberia in 1727, some 4,000 miles to the east of Saint Petersburg. He was pardoned in 1730 because of his skills in military engineering.

After Peter’s daughter Elizabeth became the new monarch in 1741, he was allowed to officially return from his exile although in fact he had done so clandestinely in 1731. Hannibal became a prominent member of her court and rose to the rank of major-general. Grateful to Hannibal for his unswerving loyalty to the family of Peter l, she showered honors on him. Among her gifts were ten villages with hundreds of serfs. She wanted him to remain at the court but Hannibal declined and asked for permission to return to Revel (now Tallinn, Estonia), where he was made a commander.

Hannibal was twice married. His second wife Christina Regina von Schöberg bore him eleven children. One of his sons named Osip was the grandfather of the poet Alexander Pushkin, the father of modern Russian literature and its greatest poet.

Hannibal died on May 14, 1781; and though Pushkin never knew him, he was so enamored with his African heritage that he wrote a fictionalized biography of Hannibal entitled The Negro of Peter the Great, in 1837.