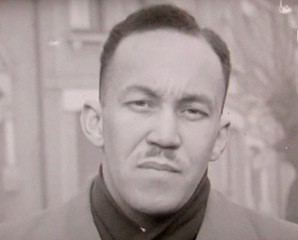 Billy Strachan was a World War 2 RAF hero and civil rights pioneer. A campaigner against colonialism, he was a member of the Communist Party and the secretary of the London branch of the Caribbean Labour Congress (CLC). He founded and edited a monthly journal, Caribbean News, which was the first Black British monthly newspaper.

William Arthur Watkin Strachan was born in Kingston, Jamaica on 16 April 1921. In March 1940, aged 18 years, he left Jamaica to volunteer to fight Nazism in Europe. Strachan sold his bicycle and saxophone to raise the fare; arriving in Britain with £2.10 in his pocket and a suitcase containing one change of clothes. He joined the Royal Air Force and after twelve weeks of basic military training, as a wireless operator and air gunner, he was made a sergeant. In 1941 he joined a squadron of Wellington bombers, which made nightly raids over heavily defended German industrial targets. He flew 30 raids over enemy territory, an astonishing feat as the average life of a bomber crew was seven missions.

Those 30 heroic operations entitled him to a job on the ground. However, he asked to be retrained as a pilot. He qualified in record time; with just seven hours of training. Strachan did 15 missions as bomber pilot; and gained fame for his clever way of escaping German fighters. “The trick,” he explained, “was to wait until the enemy was right on your tail and, at the last minute, cut the engine, sending your lumbering Lancaster into a plunging dive, letting the fighter overshoot harmlessly above.”

Sergeant Strachan was promoted twice more, first to flying officer and then flight lieutenant, which was a remarkable achievement.

After the war Strachan served as a liaison officer in the RAF sorting out racial disturbances. Defending some of the cases gave him a taste for law and advocacy. Once demobbed, he returned to Jamaica.  In 1947, Strachan attended the Caribbean Labour Congress (CLC) in Trinidad. The CLC was militant socialist organisation founded in the West Indies after World War 2.

Strachan returned to London after agreeing to set up a branch in the capital of the empire. He was elected secretary of the London branch and and served in that capacity until 1956, working closely with leaders of Caribbean independence movements.

Under his leadership the CLC became a leading anti-imperialist organisation. Strachan worked closely with leaders of Caribbean independence movements like Guyana’s Cheddi Jagan, and those who supported them in the UK, among them Fenner Brockway and Claudia Jones.

In 1952 Strachan launched one of the first left-wing newspapers for Caribbean people living in Britain. The Caribbean News, was the first Black British monthly newspaper dedicated to the ideals of Caribbean independence, socialism, and solidarity with colonial and oppressed people throughout the world.

Strachan was a civil rights pioneer, who welcomed the Empire Windrush passengers to a meeting in London within days of their arrival in 1948, to offer assistance and advice. He spoke to meetings all over London and beyond opposing racism and supporting Black people in Britain from the 1940s through until illness prevented it in the 1990s. Walking with a pronounced limp resulting from a crash early on in his flying career, he quickly rose to become one of the most important black political figures of the post-war era, and was once depicted with devil’s horns in a cartoon in the Daily Sketch alongside Stalin and Paul Robeson on account of his membership of the Communist Party. His entanglements with the authorities during a tour of the Caribbean in 1952 saw him celebrated in the calypso, Billy and Ferdie, by Mentoman.  His leadership was also important during the Notting Hill race riots of 1958.

However, with a wife and three children to support, he began studying law and was called to the Bar in 1959. Within a decade he had become a senior clerk to magistrates courts, including Marylebone, Hampstead and Clerkenwell, and in 1971 was elected president of the Inner London Justices Clerks Society. He would also write several definitive legal guides on subjects ranging from adoption to drink driving.

Towards the end of his life, Strachan, who had always loved horse riding, played a key role in founding the Disabled Riders Association.

To understand more of Strachan’s roles in the RAF, please see also Whos Who in an RAF Bomber Crew. https://www.iwm.org.uk/history/whos-who-in-an-raf-bomber-crew

Much of the information about Billy Strachan’life comes from the research by David Horsley. To obtain a copy of Horsley’s pamphlet on Strachan, email him at ukdavid.d@gmail.com.