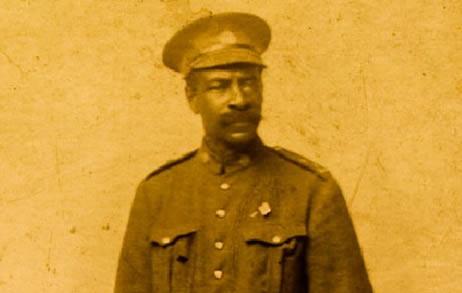 Jeremiah “Jerry” Alvin Jones (March 30, 1858 – November 23, 1950) was an African Canadian soldier who served in World War I. He was apparently recommended for a Distinguished Conduct Medal but there is no record of his having received it. His treatment has been seen as an example of the lack of recognition accorded to Black Canadian soldiers. Campaigns to have him receive the medal posthumously eventually resulted in his being awarded the Canadian Forces Medallion for Distinguished Service on February 22, 2010.

Private Jones act of heroism dates to the spring of 1917 during the Battle of Vimy Ridge when he single-handedly took out a German machine gun nest.

Amid a raging and bloody battle that had Canadian troops pinned down by machine gun fire, Jones volunteered to attempt to silence the German gun.

“I threw a hand bomb (grenade) right into the nest and killed about seven of them,” he was quoted as saying in a past Canadian Press story. “I was going to throw another bomb, when they threw up their arms and called for mercy.”

The remaining half dozen enemy troops then surrendered to Jones, who forced them to carry their machine gun back across the battlefield to the Canadian lines where they dropped it at the feet of his commanding officer.

Wounded in the action, and again during the battle of Passchendale, Jones was recommended for the Distinguished Conduct Medal – an award for valour, second only to the Victoria Cross. But, faced with the discrimination that failed to recognize the deeds of he and other black soldiers of his time, Jones was passed over for recognition time and time again.

Over the years, The Truro Daily News has published several articles highlighting Jones’ heroics on the battlefield and his recommendation for the DCM. A letter from a Truro soldier based in Witley Camp, Surrey, England on July 29, 1917, that was published in the Truro Daily News, quoted the writer as saying, Jones, “had captured a German machine gun, forced the crew to carry it back to our lines, and, depositing it at the feet of the CO. said;- ‘Is this thing any good?'”

On September 21, 1917, Jones’s sister Martha told The Truro Daily News said that Jones “won the DCM by capturing a German machine gun and crew”. The newspaper once again alluded to the medal recommendation, in an article on Jerry’s 79th birthday. This time they reported “His valor won for him a recommendation for the DCM”
The late Nova Scotia Senator Calvin Ruck worked without success for more than a decade to get the Canadian government to award a medal posthumously to his friend.

During that campaign, Ruck argued that the racist climate of the time precluded Jones or other black soldiers from getting their due recognition and he felt that it would be appropriate for the government to award the medal to Jones on behalf of all black veterans.

On September 9, 2000, The Last Post Fund erected a new grave stone for Jones with full military honours. The Truro Millennium Committee, 125th Anniversary Committee and The Jones Family sponsored a tree carving of Jones as part of the Truro Tree Sculpture Project, in November 2000.