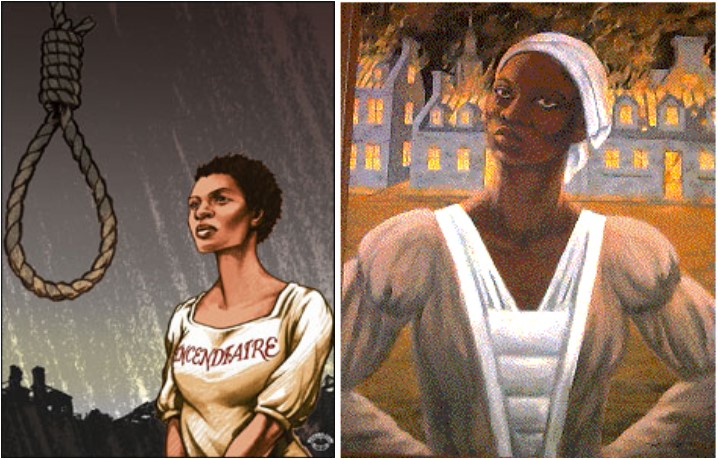 In 1734, Marie-Joseph Angélique, an enslaved Black woman in Montréal, was charged with arson after a fire leveled Montréal’s merchants’ quarter. It was alleged that Angélique committed the act while attempting to flee her bondage. She was convicted, tortured, and hanged on 21 June 1734. While it remains unknown whether or not she set the fire, Angélique’s story has come to symbolize Black resistance and freedom.

Angélique was born in Madeira, Portugal, around 1705. Little is known of the first 20 years of her life. She may have been first enslaved in Portugal, an active port of the Maafa (Atlantic slavery). It was likely there that Angélique was sold to the Flemish merchant Nichus Block when she was in her early teens. Angélique was taken by boat to North America, possibly stopping in Flanders (what is now northern Belgium), which had close trading ties with Portugal. 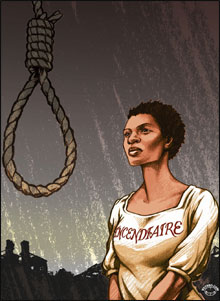 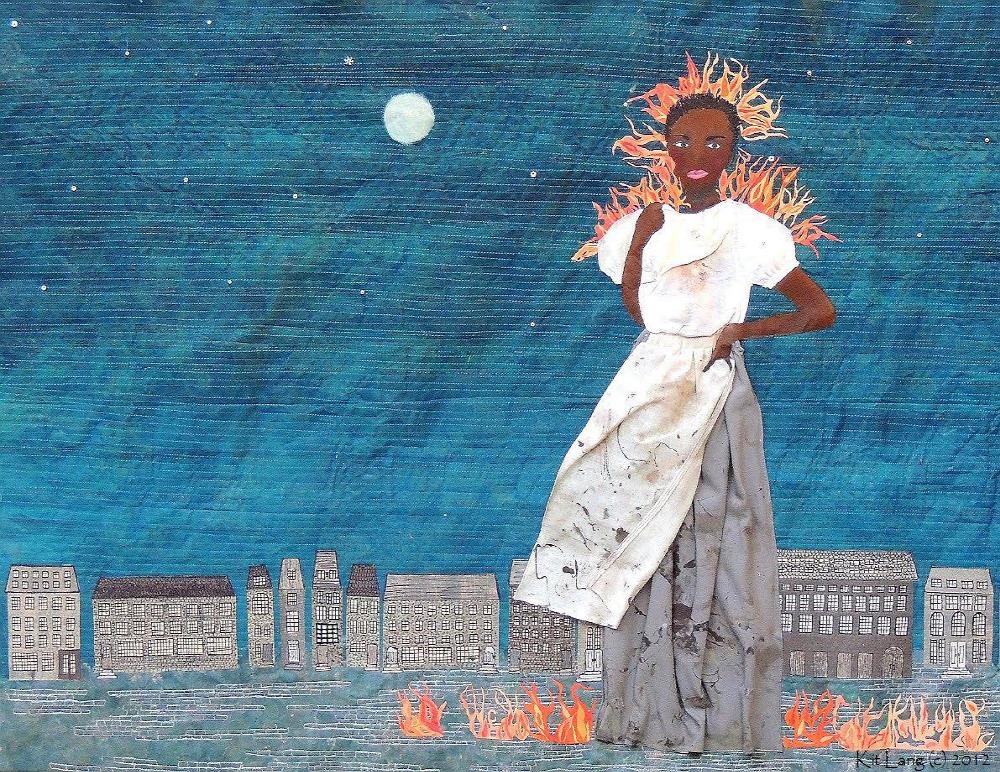 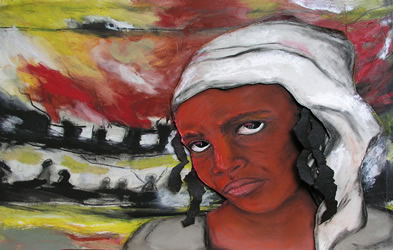 She first lived in New England, until François Poulin de Francheville, a French businessman, bought her and brought her to his home in Montreal. De Francheville died not long after her arrival, but Marie-Joseph was still enslaved by his wife, Therese de Couagne. It is she who renamed Marie-Joseph “Angélique,” after her dead daughter.

Unlike the common idea one might have of an enslaved person, Marie-Joseph Angélique had a fiery temper, was stubborn and willful. Not long after her arrival in Montreal, she got involved in a romantic relationship with François Thibault, a whyte servant who also worked for the Francheville widow. The Montreal community disapproved of this union between a Black woman and a whyte man. In the midst of winter 1734, the pair intended an escape: they fled together, by night, across the frozen St. Lawrence River. They were hoping to get to New-England and, from there, back to Europe. But bad weather forced them to stop not far from Montreal, and they were quickly discovered by the militia and escorted back to town.

Angélique was sent back to the widow Francheville and her intended escape went unpunished. Thibault, on the other hand, was sent to prison. Angélique continued to visit him during his imprisonment, providing him food and support, despite her mistress’s disapproval. Thibault was released two months later, on April 8th, 1734, two days before the fire of Montreal.

Soon after, Angélique ran away with Thibault. Her intent was to return to Portugal, the land of her birth. The couple set fire to Angélique’s bed at Alexis Monière’s home — where Francheville had chosen to move them temporarily — and fled in the direction of New England, where they hoped to catch a ship bound for Europe. Two weeks later, Angélique and Thibault were tracked down by the police in nearby Chambly. Angélique was returned to her owner to await transportation to Québec City, and Thibault was sent to jail. Once she returned to Montréal, Angélique continued to state that she would burn down her mistress’ house because she wanted to be free.

On the evening of Saturday 10 April 1734, a large portion of Montréal — the merchants’ quarter — was destroyed by fire. At least 46 buildings, mainly homes, were burnt, plus the convent and hospital of the Hôtel-Dieu de Montréal. Angélique was accused of starting the fire and arrested by police on 11 April. She was taken to court the following morning, where she was charged with arson, a capital crime punishable by death, torture or banishment. In the French legal system of the 18th century, the accused was presumed guilty, and in New France, there were no trials by jury, only inquisitorial tribunals in which the defendant was meant to prove her innocence. Lawyers were banned from practicing in the colony by Louis XIV.

The arrest of Angélique began an exceptionally long judiciary process. Her trial lasted six weeks, uncommon in New France, where trials lasted no more than a few days. 22 persons – rich and poor, men and women – testified against Marie-Joseph Angélique. All admitted that they did not see Angélique start the fire, but they were unanimously convinced of her guilt. Only her enslavress, the widow Francheville, stood up for Angélique, persuaded of her innocence.

Despite the fact that everyone wanted her to be guilty, the judge responsible for the case, Pierre Raimbault, reputed for his severe judgments, had nothing solid against Angélique. Nothing, until a new witness appeared out of nowhere, after six weeks of trial: Amable Lemoine Monière, the five-year-old daughter of Alexis Lemoine, a merchant. The little girl swore under oath that she had seen Angélique going to the attic of the Francheville house holding a shovel full of coals, just before the fire.

Amable’s testimony sealed Angélique’s fate: although she kept claiming her innocence, she was condemned to death. She was submitted to the torture of the boot – wood planks bound to the prisoner’s legs, squeezing them and crushing the bones – before her execution, in order to make her name her accomplices. Under torture she admitted the crime, but, begging for mercy and for a quick death, she maintained she was acting alone.

After a six week tribunal, Angélique was found guilty and sentenced to death. She was to have her hands cut off and be burned alive. The sentence was appealed to the superior court in Québec City, where the death penalty was upheld and the gruesome aspects of the sentencing lessened. Angélique would be tortured, hanged, and then her body burned. She returned to Montréal to await her death. Throughout her trial, at both the lower court in Montréal and the upper court in Québec, she denied setting the fire.

On the morning of 21 June 1734, Angélique was tortured in her jail cell by means of the brodequins, a medieval torture instrument that crushed her leg. The use of torture was standard in 18th-century prosecution, and in Angélique’s case, the court wanted her to admit to setting the fire. Under torture, she broke down and confessed. Nevertheless, she refused to name Claude Thibault as co-conspirator and co-arsonist. (The judges believed that Thibault and Angélique had set the fire together.)

After the torture, Angélique, dressed in a white chemise and holding a burning torch in her hand (the symbol of her crime), was placed in a garbage cart and taken to the portal of the Notre-Dame Basilica, where she confessed to her crime, and begged pardon of god, the king and the people. She was then hanged. The hangman and torturer was Mathieu Léveillé, an enslaved Black man employed as royal executioner. Angélique’s body was displayed on a gibbet for two hours. At 7:00 p.m., her body was placed on a pyre and burnt, her ashes gathered and cast to the four winds.

The burning of Montréal, as well as the arrest and subsequent trial of Angélique, reveals much about the nature of enslavement in Canada, a legal institution that existed for over two hundred years. It is possible that Angélique did not set the fire. But she made an ideal scapegoat for the crime: she was Black, enslaved, poor, and a foreigner, and so in every aspect was a social outcast. As an enslaved, Angélique had no rights that New France or whyte society would respect.

On the other hand, Angélique may have set the fire. She had many grievances against whyte society in Montréal. Whytes had enslaved her, stripped her of her freedom and human rights, and taken her from a homeland that she clearly loved. In Montréal, she had attempted at least once to escape from enslavement but was thwarted. Arson had played a role in that earlier escape. Centuries later, Marie-Joseph Angélique has become a symbol of Black resistance and freedom. 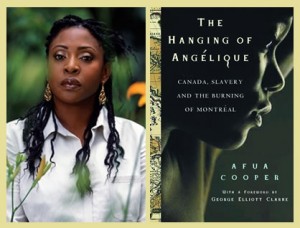 Historians such as Denyse Beaugrand-Champagne, author of the Le Procès de Marie-Josèphe Angélique (Beaugrand-champagne, 2004), believe it is clear that Angélique did not start the fire. They argue that she was just the unfortunate victim of incriminating circumstances, rumors and discrimination. But for others, like historian and poet Afua Cooper, who wrote The Hanging of Angélique: The Untold Story of Canadian Slavery and the Burning of Old Montreal (University of Georgia Press, 2007) and who dedicated 15 years of her professional life to research on Marie-Joseph Angélique, the woman undoubtedly started the fire in a gesture of rebellion and her actions were a cry for the freedom of enslaved persons.

History will never tell if Marie-Joseph Angélique truly was guilty of setting Montreal on fire. But her story and the people she represents should be remembered.