African-Caribbean Heroes of the Maafa 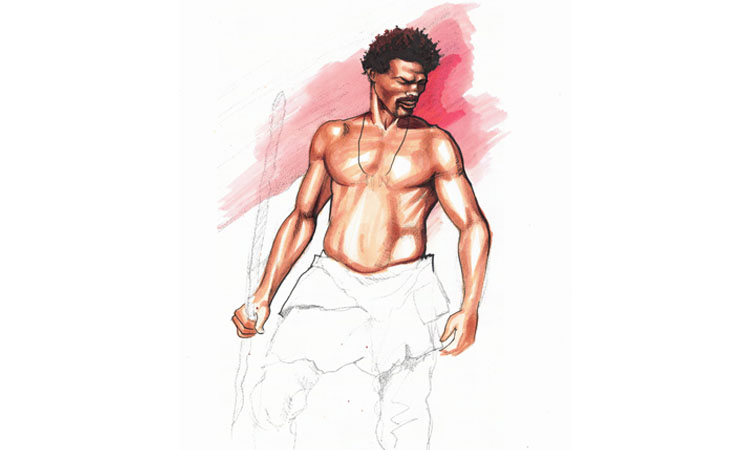 François Makandal (or Mackandal) is a legendary historical icon of Haiti. He was a Maroon leader who organized the first real attempt at the destruction of the French and enslavement in Saint Domingue. Makandal was executed in Cap-Français on 20th January 1758.

It is believed that Makandal was born in West Africa, into an illustrious Muslim family that undertook his education at a very early age. He apparently had an excellent command of Arabic, knew sculpture, painting, and music, and had in-depth knowledge of herbs and medicinal plants. At the age of twelve, he was captured as a prisoner of war, sold to European slavers and brought to the north of Saint-Domingue. Makandal was enslaved on a labour camp/plantation in the parish of Limbe in the Northern Province, where he lost one of his arms while working the night shift in a sugar mill. Subsequently, he was given the task of caring for the animals on the labor camp, before escaping and joining a maroon community where he became a leader. However, another story about the reason for his marronage, state that this was the consequence of a dispute between himself and his enslaver over a young and beautiful Afrikan female. Apparently, Makandal’s enslaver had out of vengeance ordered him to receive fifty lashes of the whip, whereupon Makandal decided to take to the woods. Here he began his long career as a maroon, evading capture for at least ten years, perhaps eighteen years.

Legends claimed that Makandal carefully built an extensive network of resistance among the enslaved people of the Northern Province, including those who worked as merchants traveling from labour camp to labour camp. Claiming to have supernatural abilities and having prophesied that enslaved people ultimately would have their freedom and independence, Makandal was able to successfully organize the different maroon groups to coordinate their activities. His qualities of leadership, his sense of organization, his stature as a religious leader, his eloquence as an orator gave him an immeasurable influence and command over others in his following. One account suggests that he was the head of a group of fifty-some maroons. Another claimed that, together with his two chief associates, Mayombe and Teysselo, Makandal had assembled “a considerable number of maroons.” Moreover, on the summit of their nearly inaccessible mountain retreat, “they had their women, their children, and well-cultivated farms; sometimes armed bands of these brigands descended at Makandal’s orders to spread terror and ravage the plantations of the neighboring plains, or to extinguish those who had disobeyed the prophet.” Having convinced others that he was chosen by the Creator to carry out the destruction of the enslavers to liberate his people, Makandal was able to use his network of followers to successfully poisoned enslavers, animals, and even other enslaved people who were deemed, enemies. The extent of his activities and the publicity they gained helped set in motion a cycle of paranoia and violence in Saint-Domingue. The French feared that Makandal planned to kill them all and believed that he had the means to do so. It is estimated that Makandal’s forces killed over 6,000 during six years of insurrection.

According to De Vaissiere: “Makandal was more than simply a leader of maroon bands. Not that he disdained the pillaging and ransacking of plantations, or the theft of cattle and other ordinary exploits of fugitive slaves; but he seemed at the same time to have sensed the possibility of creating out of marronage a center of organized black resistances against the whites.” Makandal also seems to have had a solid understanding of the racial origins and development of Saint Domingue. One famous account of his life described a speech he made. Makandal gathered a large group of his followers and had a vase full of water brought to him, in which he placed three scarves–one yellow, one white, and one black. Pulling out the yellow scarf first, he told listeners: “This represents the original inhabitants of Saint Domingue. They were yellow.” “These,” he said, pulling out the white scarf, “are the present inhabitants. Here, finally, are those who will remain masters of the island; it is the black scarf.”

Finally, the day and hour were set when the water of all the houses in Le Cap was to be poisoned. Makandal knew the name of every person on each labour camp who supported and participated in his movement. He had an exact list of the enslaved people, who once the poison had struck panic throughout the town, was to organize in contingents from Le Cap and spread out into the countryside to massacre the French. The aim was to overthrow the French regime, whereby the Afrikans would become the new rulers of Saint Domingue.

However, the French, fearing a revolution, tortured an ally of Makandal into divulging information that led to his capture. Makandal was sentenced to death. He was made to kneel in a plaza in Le Cap, wearing a sign that read “Secudcer, Profaner, Poisoner.” He was then tied to a post in the center of the plaza, and a fire was lit underneath him. As the flames reached his body, he struggled to break free, and the post to which he was attached gave way. The Afrikan people in the watching crowd shouted, “Makandal saved!” and panic broke out. The soldiers quickly cleared the plaza, and Makandal was tied to a board and thrown back into the fire. Makandal had often boasted that he was able to change form and before his execution, he declared that he would transform himself into a fly to escape the flames. Few saw him die, and many believed he had indeed escaped the flames, and was once again in the hills, plotting a new insurrection.

After his death, Haitian people used the term “Makandal” to refer to ritual talismans as well as to the priest who made them.

Source:
Avengers of the New World by Laurent Dubois
The Making of Haiti by Carolyn E. Fick