The Famished Road by Ben Okri, won the 1991 Man Booker Prize. The novel has the most beautiful beginning of any novel I have ever read. Classified as “magical realism,” the book explores the spiritual belief of Afrikan people that we live in a world of three: the world of the living, the world of those yet-to-be-born, and the world of the non-living (Eguns/Ancestors). Therefore, to live according to Afrikan spiritual belief, is to allow all that is magical, mystical, and spiritual to touch our lives, even if we are living in the harshest of circumstances.

In an interview about his prize-winning novel, Okri explained that “The Famished Road is essentially a novel about the spirit child, Azaro (the main character of the novel). In Nigerian, a spirit child is known as Abiku. This is a child that keeps on being born, dying, and born again. So it is a cyclical child, that does not like reality/existence. The child does not like reality because it sees reality as being very difficult, filled with suffering and pain. Abiku comes from the world of spirit, which is a land of light, joy, rainbow, possibilities, and freedom. A place of eternities, silence and music. Therefore, if they have this other land why would spirit children want to come into realty to suffer pain, bereavement, and mourning. They do not like this world. However, Azaro is a unique kind of hero because in having a choice between eternity and mortality, he chooses mortality. So here is a child that could live a more beautiful existence but chose this difficult one. Azaro not only choose to live but to be born into a poor family that experiences a great deal of suffering! The hardest possible life.” 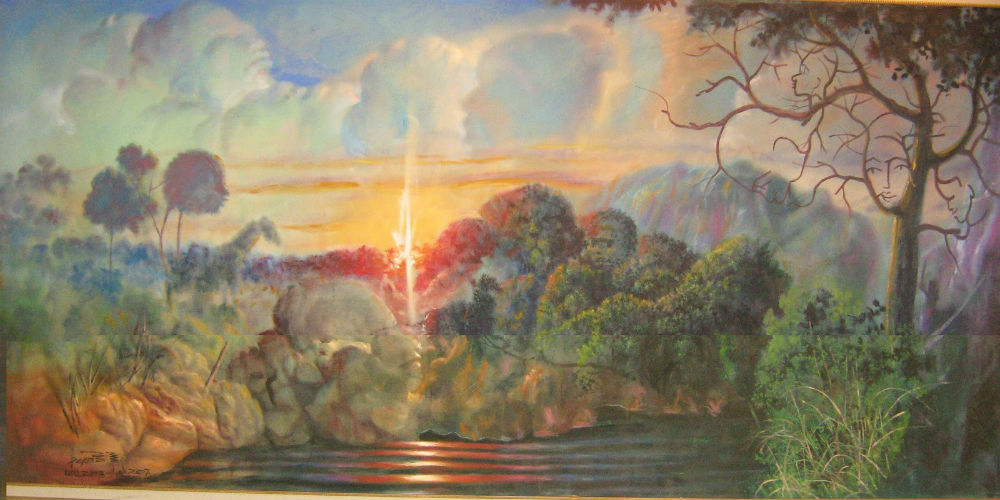 A surreal work of Abayomi Barber

The Famished Road carries within it the myths of beginning, and can only be loved, be appreciated by those of who still believe in mysteries.

Here are some of the magical quotes from The Famished Road

“In the beginning there was a river. The river became a road and the road branched out to the whole world. And because the road was once a river it was always hungry.
In that land of beginnings spirits mingled with the unborn. We could assume numerous forms. Many of us were bird. We knew no boundaries. There was much feasting, playing, and sorrowing. We feasted much because of the beautiful terror of eternity. We played much because we were free. And we sorrowed much because there were always those amongst us who had just returned from the world of the Living. They had returned inconsolable for all the love they had left behind, all the suffering they hadn’t redeemed, all that they hadn’t understood, and for all they had barely begun to learn before they were drawn back to the land of origins.
There was not one amongst us who looked forward to being born. We disliked the rigours of existence, the unfulfilled longings, the enshrined injustices of the world, the labyrinths of love, the ignorance of parents, the fact of dying, and the amazing indifference of the Living in the midst of the simple beauties of the universe. We feared the fearlessness of human beings, all of whom are born blind, few of whom ever learn to see.” ~Azaro

“There are many reasons why babies cry when they are born, one of them is the sudden separation from the world of pure dreams, where all things are made of enchantment, and where there is no suffering.” ~Azaro

“…I wanted to taste of this world, to feel it, suffer it, know it, to make a valuable contribution to it…” ~Azaro

“Learn to drink, my son. A man must be able to hold his drink because drunkenness is sometimes necessary in this difficult life.” ~Azaro’s father, Black Tyger

“You are a mischievous one. You will cause no end of trouble. You have to travel many roads before you find the river of your destiny. This life will be full of riddles. You will be protected and you will never be alone.” ~King of the spirit-children 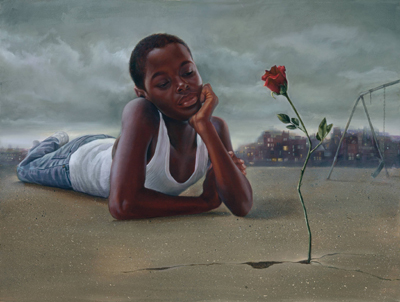 “This is what you must be like. Grow wherever life puts you down.” ~Azaro’s father, Black Tyger

“Life is full of riddles that only the dead can answer.” ~Azaro’s father, Black Tyger

“I have been carrying the world on my head today.” ~Azaro’s father, Black Tyger

“Be the true son of your father.” ~Azaro’s father, Black Tyger

“I fight fire and become fire. Anyone who fights me fights the sun.” ~Azaro’s father, Black Tyger

“Our old people are very powerful in spirit. They have all kind of powers. We are forgetting these powers. Now, all the power that people have is selfishness, money, and politics.” ~Azaro’s father, Black Tyger

The world is tougher than fire or steel.” ~The rats

“We feared that the photographer had been murdered. His glass cabinet remained permanently shattered. It looked misbegotten. It became a small representation of what powerful forces in society can do if anyone speaks out against their corruptions.” ~Azaro

“Our destiny will protect us. Don’t fear anything my son…” ~Azaro’s mother

“When [whyte] people first came to our land, we had already gone to the moon and all the great stars. In the olden days they used to come and learn from us. My father used to tell me that we taught them how to count. We taught them about the stars. We gave them some of our gods. We shared our knowledge with them . We welcomed them. But they forgot all this. They forgot many things. They forgot that we are all brothers and sisters and that black people are the ancestors of the human race. The second time they came they brought guns. They took our lands, burned our gods, and they carried away many of our people to become slaves across the sea. They are greedy. They want to own the whole world and conquer the sun. Some of them believe they have killed God. Some of them worship machines. They are misusing the powers God gave all of us. They are not all bad. Learn from them, but love the world.” ~Azaro’s mother

“When people fight you, toughen up, study them, wait for the right time, and then fight them back… They will respect you.” ~Azaro’s father, Black Tyger

“From a certain point of view the universe seems to be composed of paradoxes. But everything resolves. That is the function of contradiction.” ~The spirit

“…Each new generation begins with nothing and with everything. They know all the earlier mistakes. They may not know that they know, but they do. They know the early plans, the original intentions, the earliest dreams. Each generation has to reconnect the origins for themselves. They tend to become a little wiser, but don’t go very far. It is possible that they now travel slower, and will make bigger, better mistakes. That is how they are as a people. They have an infinity of hope and an eternity of struggles. Nothing can destroy them except themselves and they will never finish the road that is their soul and they do not know it.” ~The spirit

“We are the miracles that God made to taste the bitter fruits of time. We are precious, and one day our suffering will turn into wonders of the earth. The sky is not our enemy. There are things that burn me now which turn golden when I am happy. Do you not see the mystery of our pain? That we bear poverty, are able to sing and dream sweet things, and that we never curse the air when it is warm, or the fruit when it tastes so good, or the lights that bounce gently on the waters. We bless things even in our pain. We bless them in silence. That is why our music is sweet. It makes the air remember. There are secret miracles at work, my son, that only time will bring forth. I too have heard the dead singing . They tell me that this life is good. They tell me to live it gently, with fire, and always with hope, my son. There is wonder here and there is surprise in everything that you cannot see. The ocean is full of songs. The sky is not our enemy. Destiny is our friend.” ~Azaro’s father, Black Tyger

“To be a man is not a small thing.” ~Azaro’s father, Black Tyger

“When people keep running, something keeps pursuing them.” ~The blind old man

“Maybe you have to overcome things first in the spirit world, before you can do it in this world.” ~Azaro’s father, Black Tyger

“If people want to be jealous of you, let them be jealous. Jealousy is free. People can eat it and grow fat on it if they want…” ~The Herbalist

“Too many road! Things are CHANGING TOO FAST! No new WILL. COWARDICE everywhere! SELFISHNESS is EATING UP the WORLD. THEY ARE DESTROYING AFRICA! They are DESTROYING the WORLD and the HOME and the SHRINES and the GODS! THEY are DESTROYING LOVE TOO!” ~The Herbalist

“WHO CAN DREAM A GOOD ROAD AND THEN LIVE TO TRAVEL ON IT? Who can GIVE BIRTH TO HIMSELF and then BE HIS OWN FATHER AND MOTHER? Who can LIVE IN THE FUTURE and LIVE IN THE PRESENT and not GO MAD? Who can LIVE AMONG SPIRITS AND among MEN WITHOUT DYING? WHO can EAT AND SLEEP WITH HIS OWN DESTINY AND still KNOW THE HAPPINESS OF A BEAUTIFUL THING? THOSE ARE RIDDLES FOR THE TREES!” ~The Herbalist

“When people don’t believe you can do something and you do it, they begin to respect you…” ~Azaro’s father, Black Tyger

“I am beginning to see things for the first time. This world is not what it seems. There are mysterious forces everywhere. We are living in a world of riddles.” ~Azaro’s father, Black Tyger

“THINK DIFFERENTLY AND YOU WILL CHANGE THE WORLD.” ~Azaro’s father, Black Tyger

“The man whose light has come on in his head, in his dormant sun, can never be kept down or defeated. We can redream this world and make the dream real. Human beings are gods hidden from themselves.” ~Azaro’s father, Black Tyger

“It is more difficult to love than to die. It is not death that human beings are most afraid of, it is love. The heart is bigger than a mountain. One human life is deeper than the ocean. Strange fishes and sea-monsters and mighty plants live in the rock-bed of our spirits. The whole of human history is an undiscovered continent deep in our souls.” ~Azaro’s father, Black Tyger

“Before everything was born there was first the spirit. It is the spirit which invites things in, good things, or bad. Invite only good things, my son. Listen to the spirit of things. To your own spirit. Follow it. Master it. So long as we are alive, so long as we feel, so long as we love, everything in us is an energy we can use. There is a stillness which makes you travel faster. There is a silence which makes you fly. If your heart is a friend of Time nothing can destroy you.” ~Azaro’s father, Black Tyger

“Many people reside in us. Many past lives, many future lives. If you listen carefully the air is full of laughter. Human beings are a great mystery.” ~Azaro’s father, Black Tyger

“A dream can be the highest point of a life.” ~Azaro

You are your best thing.