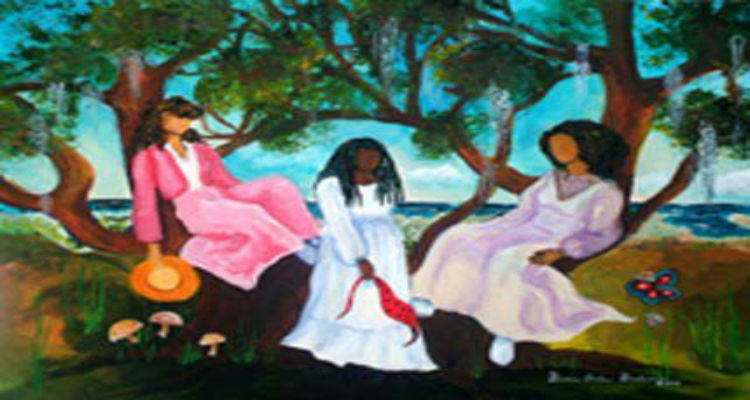 “Ever since they left Thies, the women had not stopped singing. As soon as one group allowed the refrain to die, another picked it up, and new verses were born at the hazard of chance or inspiration, one word leading to another and each finding, in its turn, its rhythm and its place. No one was very sure any longer where the song began, or if it had an ending. It rolled out over its own length, like the movement of a serpent. It was as long as a life.”
― Ousmane Sembène, God’s Bits of Wood

Amelia’s song is one of the most fascinating stories in the African-American drama of the Maafa/Atlantic slavery. A Mende woman, captured, transported and enslaved in Southern America, had carried within her a song of mourning. This Mende song was a dirge sung by women during a ceremony called Tenjami or “crossing the river.” One can imagine that in crossing the Atlantic, the Mende woman would have felt that she had died. All that she had known and loved had been taken away. She must have sung this song many times during the Time of Sorrow, mourning the social death she, herself, had experienced; for witnessing the death of those she had loved; and perhaps of seeing the bones of those who had died on the Trail of Death, as she was being taken to the coast of Afrika. She must have sung it often enough for it to last through the centuries, for it to be remembered, so that a daughter would one day be the fulfilment of a dream and a prophecy.

In the early 1930s, as African-American linguist, Dr. Lorenzo Turner, was conducting seminal research on the Gullah language of the Low Country of coastal South Carolina and Georgia, he discovered that some Gullah people could recite texts in African languages, with the longest being a five-line song he had learned from Amelia Dawley, who was living in a remote Georgia fishing village. Although Amelia did not know the meaning of the syllables in the song, a Sierra Leonean graduate student in the USA recognized it as Mende, his native tongue.

A map of Sierra Leone

Amelia’s song was traced back to a Sierra Leonean village, after Joseph Opala, a Euro-American anthropologist joined with ethnomusicologist Cynthia Schmidt and Sierra Leonean linguist Tazieff Koroma in an arduous search to see if her song was still remembered anywhere in Sierra Leone.

Schmidt discovered a woman, Baindu Jabati, living in the remote interior village of Senehum Ngola, in far southern Sierra Leone, who had preserved a song with strikingly similar lyrics; a dirge performed during a ceremony called Tenjami or “crossing the river.” Her grandmother taught her the song because birth and death rites are women’s responsibilities in Mende culture. The song was a typical Mende funeral song –Finya Wulo – usually performed by women as they pound rice into flour for a sacrifice to the dead. Mende women traditionally remained in town preparing for the sacrifice while the men were in the cemetery preparing the grave.

Baindu’s grandmother also made a prediction that there would be a return of lost kinsman and that Baindu would recognize them through this song.

Schmidt and Opala then went to Georgia where they found Amelia Dawley’s daughter, Mary Moran, age 69, who remembered her mother singing the song. Though transformed by African-American culture to a children’s rhyme, there was also continuity since the song was passed down by women on both sides.

In 1997, Mary Moran and her family traveled to Sierre Leone and, after a painful visit to Bunce Island, were received with jubilation in Senehum Ngola. The village’s blind, 90 year old leader, Nabi Jah, organized a Teijami ceremony for Mary, even though it had been in desuetude (a state of disuse), since the introduction of Christianity and Islam earlier in the century. Thus Mary’s homecoming became a catalyst for Mende people to rediscover a part of their own past.

When Opala asked Nabi Jah why a Mende woman exiled two hundred years ago would have preserved this particular song, he replied that the answer was obvious. “That song would be the most valuable thing she could take. It could connect her to all her ancestors and to their continued blessings.” Then he quoted a Mende proverb, “You know who a person really is by the language they cry in.”

The original version of the song had contained ten lines, as some were repeated once or twice. Over the years, the Gullah women who preserved the song changed the pronunciation slightly and deleted a number of one-syllable words, but the text is still understandable to a modern Mende speaker.