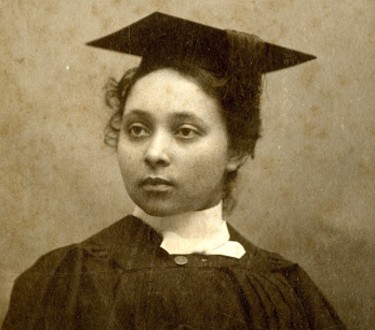 “The sunshine of her life she gives,
To everything around her,
Though brief the season that she lives
Nor lost is her endeavor.
She is indeed the eye of day, –
Gentle, hopeful, and sweet always,
She brightens many a weary way,
The cheerful little daisy.” ~Mary Annette Anderson

Mary Annette Anderson was an American professor of grammar and history and the first African-American woman elected to Phi Beta Kappa.

Mary Annette Anderson was born on July 27, 1874, in Shoreham, Vermont, to William and Philomine (Langlois) Anderson. Her father, a farmer, was a freedman originally from Virginia, and her mother was a Canadian immigrant of French and Native American ancestry. Anderson had one younger brother, William John. When her parents heard of the Northfield Seminary for Young Ladies in Massachusetts, founded in 1879 for the education of those normally denied one, such as the poor and African-Americans, Nettie (as she was called) was sent there.  And she flourished.  She became the class president, and wrote the class poem. In 1895, Anderson went to Middlebury College becoming one of the first and few African-American women to attend a New England college before the turn of the 20th century. She graduated in 1899 as valedictorian, becoming the first African American woman elected to Phi Beta Kappa.

“Commencement at Middlebury was a town holiday, and quite a day in 1899.  The townspeople had seen [Black] male graduates in the past, about ten, but in the parade from the college to the congregational church, the class valedictorian was a [Black] woman with a remarkable record of achievement. She had written the class ode which they sang that day and gave an address entitled, “The Crown of Culture.”  Wearing her honor society key, she proudly accepted a cash prize from a Shoreham doctor who promised her this sum if she graduated at the head of her class.  This she had done.  The local newspaper never mentioned her race.” – Cyndy Bittinger

Following graduation from Middlebury, Anderson taught  8th grade for one academic year at Straight College in New Orleans before being appointed a professor of English grammar and history at Howard University in Washington, D.C., where she taught for seven years, from 1900 to 1907.  After her marriage to Walter Lucius Smith on August 7, 1907, she stopped teaching. At that time, it was tradition that, once an educated woman was married, she ceased to participate in public work, particularly in the teaching profession.

She may have supported her husband in his work as the principal of Dunbar High School, the premier secondary school in the country for African-American students. They maintained homes in Washington and Shoreham where she died at age 47on May 2, 1922, after a short illness.

While the couple did not have any children, members of her family are still living. Anderson’s grandniece and grand-nephew—her brother’s grandchildren—who still live in Vermont, were discovered by historian Stephanie Evans. Myra, Anderson’s grand-niece, shared with Evans the family papers, which included Anderson’s marriage license and some handwritten notes, as well as a copy of “Aunt Nettie’s” Phi Beta Kappa key!

According to Evans, “One of the most precious things that Myra shared was a hand-written reflection that had been found in Anderson’s Bible.” The reflection went, “I’d like to add some beauty to life—I don’t exactly want to make people know more—but I’d love to make them have a pleasanter time because of me—to have some better joy or happy thought that would never have been experienced if I had not been born.”

NB. It was previously thought that Jessie Redmon Fauset, was the first African-American woman to be elected to Phi Beta Kappa.

Dear Ms. Kentake …
I just finished your piece on Mary Annette Anderson and I found it extremely interesting and informative. I was unaware of her achievements. I look at women in a different light now. Allow me to say that I have always been taught by my mother and Aunts to be respectful of ALL people and I am the product of a household that had both mother and father.
Respect was the order of the day in our home, every day. However, now when I look at women, I wonder, what kind of racism and sexism have they survived/endured to get where they are at. As men, we overlook that, dare I say, in most cases. This may be changing with the ” Me Too ” movement gaining steam. I look forward to learning more about enlightening individuals, from your website. I attended a small college in Richmond, Indiana, Earlham College, my first 2-years of college. A small institution, founded by Quakers. The average class size when I attended (’71 -“73) was 6 to 8 students per class. Unbeknownst to me, at the time, I was learning so much that when I transferred to Syracuse University, with a class size of at lease 100 students, I was able to perform so well. I wonder if this may have been the case for Ms. Anderson. I did graduate with honors, but NOT Phi Beta Kappa. Thank you for the new knowledge and continued success on your website.
Sincerely,
Earnest Thurkill, III, MPA