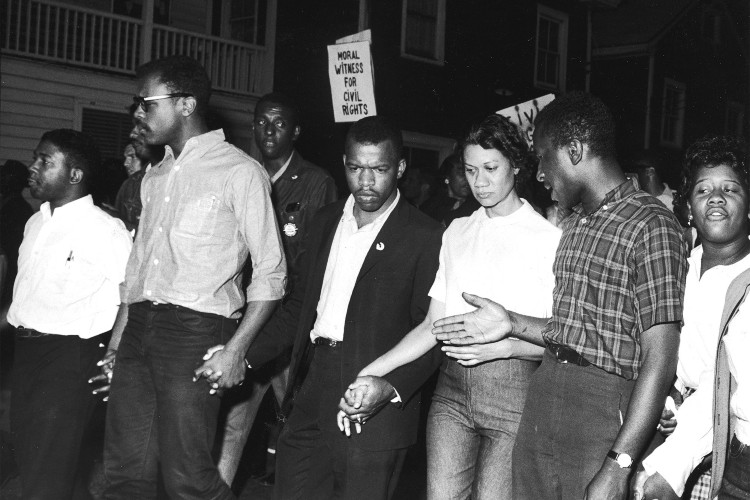 John Lewis was a prominent African-American leader in the civil rights movement in the 1960s, who was awarded the highest civilian honor of the United States, the Presidential Medal of Freedom. Lewis was among the original 13 Freedom Riders; one of the “Big Six” civil rights leaders of the historic 1963 March on Washington; and was the leader of the demonstration that became known as “Bloody Sunday.

John Lewis will be remembered as an African-American heroic icon who was willing to shed his blood for his beliefs in a better world for his people and all people.

Courage is a reflection of the heart—it is a reflection of something deep within the man or woman or even a child who must resist and must defy an authority that is morally wrong. Courage makes us march on despite fear and doubt on the road toward justice. Courage is not heroic but as necessary as birds need wings to fly. Courage is not rooted in reason but rather Courage comes from a divine purpose to make things right.

We may not have chosen the time, but the time has chosen us.

Do not get lost in a sea of despair. Be hopeful, be optimistic. Our struggle is not the struggle of a day, a week, a month, or a year, it is the struggle of a lifetime. Never, ever be afraid to make some noise and get in good trouble, necessary trouble.

We all recognize the fact that if any radical social, political and economic changes are to take place in our society, the people, the masses, must bring them about. In the struggle, we must seek more than civil rights; we must work for the community of love, peace and true brotherhood. Our minds, souls and hearts cannot rest until freedom and justice exist for all people.

I believe in nonviolence as a way of life, as a way of living. I believe that this idea is one of those immutable principles that is nonnegotiable if you’re going to create a world community at peace with itself.

We are tired of being beaten by policemen. We are tired of seeing our people locked up in jails over and over again. And then you holler, ‘Be patient.’ How long can we be patient?

If you’re not hopeful and optimistic, then you just give up. You have to take that long hard look and just believe that if you’re consistent, you will succeed.

Photo credit: Civil Rights leaders, including John Lewis (center) link hands with others as they march in protest of a scheduled speech by the pro-segregationist Alabama governor, George Wallace in Maryland, 1964. BY FRANCIS MILLER/THE LIFE PICTURE COLLECTION/GETTY IMAGES. Retrieved from https://www.vanityfair.com/style/2020/07/why-john-lewis-matters-now-more-than-ever