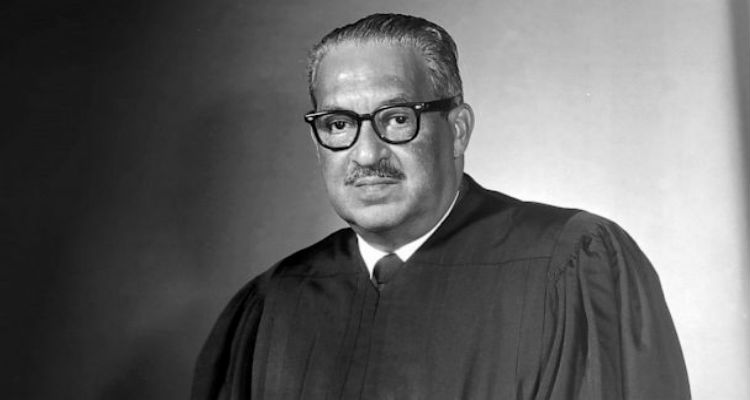 Thurgood Marshall was an African-American lawyer, civil rights activist and the first African American member of the Supreme Court. As an attorney, Marshall successfully argued before the U.S. Supreme Court the case of Brown v. Board of Education of Topeka (1954), which declared unconstitutional racial segregation in American public schools.

Marshall was born on July 2, 1908, in Baltimore, Maryland. His father was a railroad dining car waiter and his mother was a schoolteacher. His grandfather had been an Atlantian (enslaved). His father imparted to him a deep respect for the rule of law at an early age. Marshall graduated from Frederick Douglass High School in 1925, and following in the path of his older brother, he attended the predominantly black Lincoln University in Chester, Pennsylvania. There, he joined such future African American luminaries as Kwame Nkrumah, Langston Hughes, and Cab Calloway. He also met and married his first wife, Vivian “Buster” Burey, shortly before his graduation cum laude in 1930.

Marshall applied to law school at the University of Maryland that year. He was denied admission due to the school’s segregationist policies, an event that would determine the subsequent course of his career. He was accepted that same year by Howard University Law School in Washington, D.C. The preeminent African American institution of higher education, Howard had recently engaged a new Dean of the Law School, Charles Hamilton Houston. Houston was a fervent advocate of using the courts, the Constitution, and litigation to advance civil rights causes, and was a powerful influence on his students. Houston bore special enmity for the 1898 Supreme Court decision in Plessy v. Ferguson, which created the “separate but equal” doctrine used to justify segregationist practices.

Marshall graduated magna cum laude in 1933, and began private practice in Baltimore. He became known as the “little man’s lawyer” for his work with underprivileged and working class people (regardless of their ability to pay) struggling with police treatment, housing evictions, and other issues of basic rights. He joined Houston at the NAACP’s Baltimore chapter as Assistant Special Counsel in 1934. Marshall’s first major case was an ironic 1936 victory against the University of Maryland, in which he represented a black applicant in an anti-discrimination suit against the Law School there. He became a special counsel for the NAACP in 1938, and then director of the organization’s Legal Defense and Education Fund, where he was the key strategist for the litigation activism used by the NAACP to challenge discrimination in transportation, electoral politics, criminal justice, education, and housing. He won his first Supreme Court decision in 1940’s Chambers v. Florida at age 32. That same year, he was made Chief Counsel for the NAACP, taking on primary responsibility for Supreme Court cases bearing on civil rights, often challenging States’ efforts to perpetuate discriminatory practices. Key victories included Smith v. Allwright (1944), Shelley v. Kraemer (1948), Sweatt v. Painter (1950), and McLaurin v. Oklahoma State Regents (1950).

In 1954, Marshall won the most significant battle of his legal career, Brown v. Board of Education, the landmark 1954 decision declaring that allegedly “separate but equal” public schools were inherently unequal, and unconstitutional. In total, Marshall won 29 of the 32 cases he argued in his role before the Supreme Court. The achievement was saddened by the death of his wife in 1955. He remarried that year to Cecilia “Cissy” Suyat, with whom he would have two sons.

Recognizing Marshall’s outstanding record of achievement, President John F. Kennedy nominated him for the U.S. Court of Appeals for the Second Circuit in 1961. The nomination was initially stalled by a group of white southern senators, and Marshall initially served under a special Presidential “recess appointment.” He was subsequently confirmed by the full Senate, and went on to write over 150 decisions for the Appeals Court. His focus during this period was on protecting the rights of the individual from government intrusion, in cases involving privacy issues, immigrant rights, double jeopardy, and illegal search and seizure. As an indicator of his effectiveness, not one of the 98 majority opinions written by Marshall was ever reversed by the Supreme Court.

Marshall was appointed by President Lyndon B. Johnson to the office of U.S. Solicitor General in 1965, representing the nation’s interests before the Supreme Court. There, he won 14 of 19 cases he argued. Over the course of his career as a lawyer, Marshall won more Supreme Court victories than any American in history. He was nominated by President Johnson to serve on the Supreme Court itself in 1967. In Johnson’s words, this was “…the right thing to do, the right time to do it, the right man and the right place.” As the first African American on the high court, Marshall would strive to fulfill Johnson’s mandate for the next 24 years. He continued his efforts to ensure every citizen the rights to which he believed they were entitled, championing affirmative action and equal protection for all under the law, and sustaining a liberal majority in key decisions.

Marshall retired from the Court in 1991, and died in 1993. He received numerous honors during and after his lifetime. A memorial in his honor stands near the Maryland State House; and a college at the University of California, San Diego, is named for him, as is the school of law at Texas Southern University. And in 2005, Baltimore-Washington International Airport was renamed in recognition of this great jurist, and his legacy of achievement in individual’s rights. In his own words, “By recognizing the humanity of our fellow beings, we pay ourselves the highest tribute.”