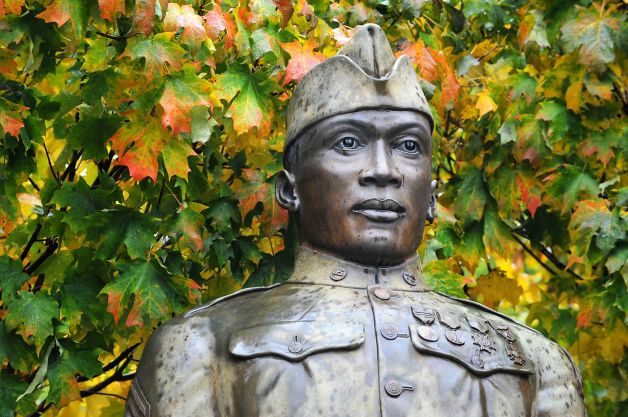 Sergeant Henry Johnson (1897-July 5, 1929), a member of the all-Black 369th Army Infantry became a hero when, after being wounded 21 times, he singlehandedly fought off a group of German soldiers with only a knife and a gun to rescue a wounded comrade. He was the first American soldier in World War I to receive the Croix de Guerre with star and Gold Palm from the French government, but was not officially recognized by the U.S. until 1996. 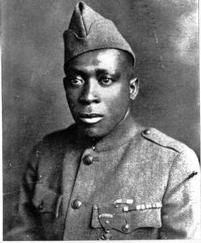 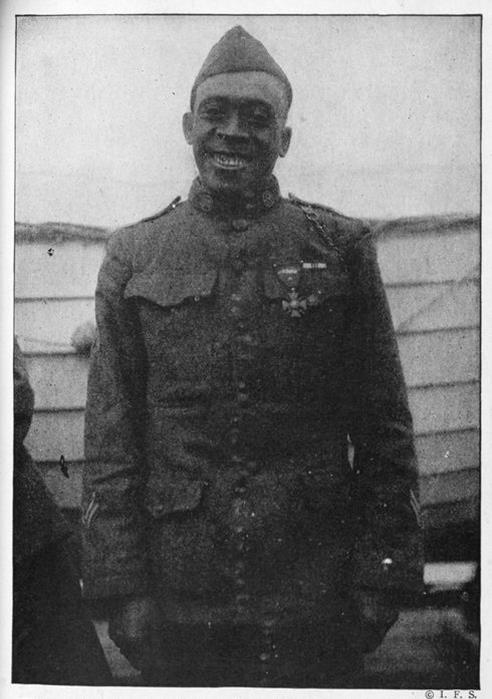 It was May 14, 1918, when a 24-man German raid set upon an encampment inhabited by two American soldiers. The German’s intent was to capture and kill a few American soldiers but the only men there were Private Henry Lincoln Johnson and Private Needham Roberts. Upon storming the camp, Private Johnson was injured and Needham Roberts was captured. Johnson took German bullets in the head and lip but fired his rifle into the darkness. He took more bullets in his side, then his hand, but kept shooting until he shoved an American cartridge clip into his French rifle and it jammed.

By now, the Germans were on top of him. Johnson swung his rifle like a club and kept them at bay until the stock of his rifle splintered; then he went down with a blow to his head. Overwhelmed, he saw that the Germans were trying to take Roberts as a prisoner. The only weapon Johnson had left was a bolo knife, so he climbed up from the ground and charged, hacking away at the Germans before they could get clean shot at him.

“Each slash meant something, believe me,” Johnson later said. “I wasn’t doing exercises, let me tell you.” He stabbed one German in the stomach, felled a lieutenant, and took a pistol shot to his arm before driving his knife between the ribs of a soldier who had climbed on his back. Johnson managed to drag Roberts away from the Germans, who retreated as they heard French and American forces advancing. When reinforcements arrived, Johnson passed out and was taken to a field hospital. By daylight, the carnage was evident: Johnson had killed four Germans and wounded an estimated 10 to 20 more. Even after suffering 21 wounds in hand-to-hand combat, Henry Johnson had prevented the Germans from busting through the French line.

“There wasn’t anything so fine about it,” he said later. “Just fought for my life. A rabbit would have done that.”

Due to the segregation of the military, Johnson’s 369th unit known as the “Harlem Hellfighters” was forced to fight with the French as part of their 4th Army. This is why Private Henry Lincoln Johnson was awarded the French military’s highest honor – The French Croix de Guere with Gold Palm. This distinction comes with the following inscription:

President Theodore Roosevelt named Johnson as “one of the five bravest men who fought in World War I.”

Yet no honors were given to him.

Interest in obtaining fitting recognition for Johnson grew during the 1970s and 1980s. In November 1991 a monument was erected in Albany, New York’s Washington Park in his honor, and a section of Northern Boulevard was renamed Henry Johnson Boulevard.

In June 1996, Johnson was posthumously awarded the Purple Heart. In February 2003, the Distinguished Service Cross, the Army’s second highest award, was presented to his son Herman A. Johnson, a Tuskegee Airman.

As of 2012, efforts continued to have Johnson awarded the Medal of Honor.