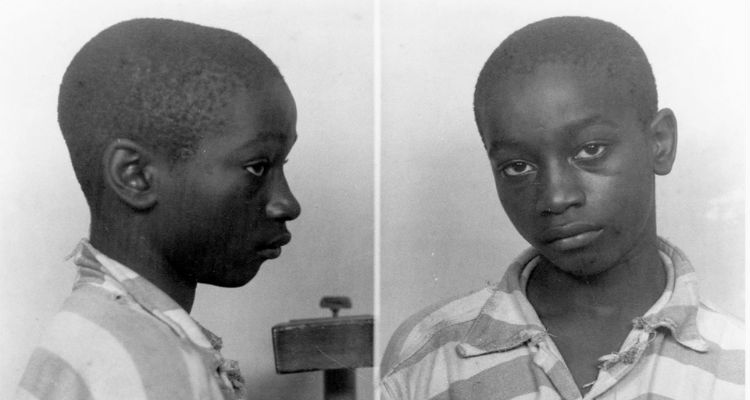 George Junius Stinney, Jr. was the youngest person to be executed in the US in the 20th century when he was sent to the electric chair in 1944. He was fourteen years old.

Stinney was sentenced to death for the murder of two whyte girls in a segregated mill town in South Carolina, in a trial that lasted less than three hours with a 10-minute jury deliberation.

When Stinney was arrested his parents were not at home. His little sister was hiding in the family’s chicken coop behind the house, while officers handcuffed George and his older brother, Johnnie, and took them away. He was questioned in a small room, alone – without his parents, and without legal counsel. Police claimed Stinney confessed to killing Betty June Binnicker, 11, and Mary Emma Thames, 8, admitting he wanted to have sex with Betty. He was rushed to trial despite there having been no physical evidence linking him to the death of the girls.

Stinney was convicted of murder on April 24 and sentenced to die by electrocution. His lawyer, a local political figure, chose not to appeal.

On June 16, 1944, he was executed, becoming the youngest person in modern times to be put to death.

Stinney had been arrested and executed within the space of around three months. Executioners noted that he was too small for the electric chair when he died. Stinney was barely 5 feet tall and not yet 100 pounds. The electric chair’s straps were too big for his frail body. Newspapers at the time reported the straps did not fit him, an electrode was too big for his leg, and that he had to sit on a bible to fit properly in the chair. And when the switch was flipped, the convulsions knocked down the large mask, exposing his tearful face to the crowd.

Since Stinney’s conviction and execution, the question of his guilt, the validity of his confession, and the judicial process leading to his execution have been criticized as “suspicious at best and a miscarriage of justice at worst.”

Stinney’s family claimed his confession was coerced, and that he had an alibi that was never heard. That alibi was his sister, now Amie Ruffner. She said she was with him at the alleged time of the crime, watching their family’s cow graze near some railroad tracks by their house when the two girls rode over on their bicycles.

“They said, ‘Could you tell us where we could find some maypops?’ ” Ruffner remembered them saying. “We said, ‘No,’ and they went on about their business.”

Stinney was accused of murdering the girls while they picked wildflowers.

The Stinney family had to leave their home. His brother, Charles, said in a statement they never came forward because they were terrified.

In 2004, George Frierson, a local historian who grew up in Alcolu, started researching the case after reading a newspaper article about it, and his work gained the attention of South Carolina lawyers Steve McKenzie and Matt Burgess. In addition, Ray Brown, attorney James Moon, and others contributed countless hours of research and review of historical documents, in finding witnesses and evidence to assist in exonerating young Stinney and in addition sought relief through the Pardon and Parole Board of South Carolina.

McKenzie and Burgess, along with lawyer Ray Chandler, filed a motion for a new trial on October 25, 2013.

George Frierson stated in interviews that “there has been a person that has been named as being the culprit, who is now deceased. And it was said by the family that there was a deathbed confession.” Frierson said that the rumored culprit came from a well-known, prominent [whyte] family. A member, or members of that family, had served on the initial coroner’s inquest jury which had recommended that Stinney be prosecuted.

On December 17, 2014, Stinney’s conviction was vacated by circuit court judge Carmen Mullen, who cited that as the youth had not received any kind of defense at his trial, his Sixth Amendment rights had been violated. Mullen ruled that his confession was likely coerced and thus inadmissible.

Bobby Seale: Co-Founder of the Black Panther Party for Self Defense

Reading about the Ocoee massacre has touched me in a mighty way. And to learn a part of black history that is not covered in their so-called school history books. This leads me too believe that the real truth for African-American lie in pages like this and for that I thank you Kentake.