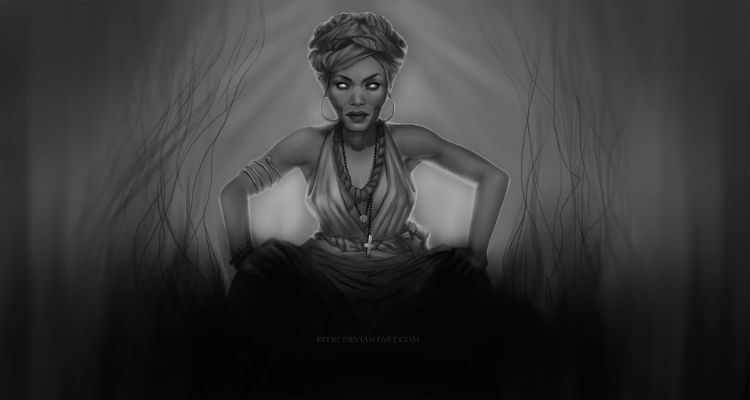 Tituba’s race has been disputed for 150 years. Since 1692, her ethnicity has evolved from Indian to half-African and half-Indian, into a fully enslaved African woman. The two women accused of witchcraft, who, unlike Tituba, were actually Black were both female servants: Candy and Mary Black.

Candy, originally from Barbados resided in Salem Town with her enslaveress, Margaret Hawkes. She was examined on July 4, 1692. When questioned, Candy revealed to the courts that it was her whyte enslaveress, Margaret, who had made her a witch and taught her the craft; “Yes, in this country [Margaret] give Candy witch.” Candy then went on to detail how Margaret made her into a witch by bringing up the “devil’s book,” and had her made her mark in it. In her description, Candy stated “[She] bring book and pen and ink, make Candy write in it.”  When asked if she was a witch, Candy replied, “Candy no witch in her country. Candy ‘s mother no witch. Candy no witch, Barbados.”

The curious magistrates asked Candy to produce the poppets that she claimed she used to torment people. Accompanied by a court-appointed deputy she was escorted home and returned with rags of cloth, a piece of cheese, some grass, and a handkerchief tied with several knots. Deciding to experiment with Candy’s tools of trade, the magistrates burned one of the rags and allegedly, a burn appeared on the hand of one of the “afflicted girls.” Two more choked as if drowning when another rag was placed under water. Two indictments were handed down against Candy and she was jailed. Later, she was found not guilty and released.

Mary Black’s enslaver was Nathaniel Putnam, who was a leader of Salem Village. Mary was accused of witchcraft on April 21, 1692, and was examined on the following day by Reverend Samuel Parris. At her examination, she was accused by several of the “afflicted girls,”  of being a witch, but Mary strongly denied this,  stating “I hurt no body. Who doth? I do not know.” She was indicted and imprisoned, but not tried. She was cleared by proclamation on January 11, 1693. Her enslaver paid her jail fees and took her back into his house.