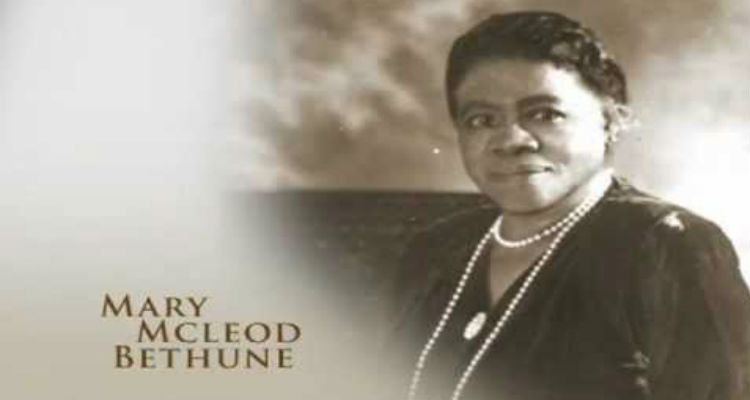 Mary Jane McLeod Bethune was an American educator, known as “The First Lady of The Struggle” because of her commitment to giving African Americans a better life. Bethune was appointed a national adviser to President Franklin D. Roosevelt.

Bethune was born on July 10, 1875, in Mayesville, South Carolina. She was the 15th of 17 children born to Samuel and Patsy McLeod, who were emancipated following the Civil War. She, like most rural Black children of the era, initially had no formal education and worked in the cotton fields with her family. She then benefited from scholarships and attended a Presbyterian mission school in Mayesville at age 11, followed by Scotia Seminary in Concord, North Carolina, graduating in 1893.

Bethune was determined to become a missionary. She hoped to serve in Africa but was denied because Blacks were not permitted to serve there by the Presbyterian Mission Board. Refocusing her efforts, she realized that “Africans in America needed Christ and school just as much as Africans] in Africa…my life work lay not in Africa but in my own country.”

As a young teacher in Chicago, she visited prisoners in jail, giving them inspiration through song. She worked at the Pacific Garden Mission, serving lunch to the homeless, and counseled the residents of Chicago’s slums. She was an instructor at the Presbyterian Mission School in Mayesville, S.C. in 1896, at the Haines Institute in Augusta, Georgia in 1896-1897, and at the Kindell Institute in Sumpter, S.C. in 1897-1898. There she met and married Albert Bethune, and together they moved to Palatka, Florida. Albert found work as a porter, while Bethune started a Sunday school program and worked again with prisoners.

In 1904, the 29-year-old Bethune scraped together $1.50 to start the Daytona Educational and Industrial Institute for African-American Girls with six initial students (five students plus her own son). Tuition was set at 50 cents per week, but no needy child was turned away. Crates became makeshift desks, and charcoal substituted for pencils; Bethune acted as teacher, administrator, and custodian. She and her students held bake-sales to raise funds.

Despite obstacles, and overcoming widespread objection to educating African American children, Bethune triumphed by her example and her mission to “Invest in the human soul.” In 1912 James M. Gamble of the Proctor and Gamble Company was persuaded by Bethune to contribute funds to her school. By 1922 enrollment was 300 students with a staff of 25. Bethune served as president for over 40 years, overseeing its evolution into a junior college and then its 1922 merger with the Cookman Institute for Men, resulting in Bethune-Cookman College that still thrives today. Enrollment is now nearly 3,000.

Bethune also created a high school and a hospital for Blacks. In addition, she became involved in several business ventures. She actively defied Jim Crow restrictions and insisted on desegregated seating in all of her schools. She and her staff made a point of voting in all elections, despite threats from the Ku Klux Klan.

Bethune began to focus her attention on political and organizational issues. Her advice to Woodrow Wilson’s Vice President, Thomas Marshall, led to the Red Cross decision to integrate. She was appointed president of the Florida Federation of Colored Women in 1917. In 1924 she attained the highest office then available to an African American woman as president of the National Association of Colored Women.

She organized the National Council of Negro Women in 1935 at the age of 60. The Council’s first office was in Bethune’s living room but soon moved to larger quarters in a Victorian townhouse in Washington D.C. In this “Council House,” she received government officials, heads of state, and leaders from around the world in her role as president. The organization grew to 800,000 members by 1955.

Bethune next became an advisor to U.S. Presidents and federal agencies, and served behind the scenes as a member of the “Black Cabinet.” She worked with Calvin Coolidge, Herbert Hoover, and Theodore Roosevelt in areas such as housing, employment, education, and child welfare. She was named director of the National Youth Administration’s Division of Negro Affairs in 1936 and served for eight years as the first Black woman in a federal agency at this level. She was named Vice-President of the NAACP in 1940 and served in 1951 on President Truman’s Committee of Twelve for National Defense.

She concurrently worked with many civic organizations, including the Association of American Colleges, the League of Women Voters, and the National Urban League, and campaigned for desegregation in the U.S. armed forces as a special assistant to the Secretary of War during World War II, while advising on the selection of the first female officer candidates. At this time, she also became a close friend of Eleanor Roosevelt and was appointed a consultant on interracial affairs and understanding at the charter conference of the United Nations.

When Bethune died on May 18, 1955, she had advanced the causes of educational opportunity and interracial cooperation immeasurably. She is honored with a statue in Washington, D.C.’s Lincoln Park (the first Black woman to be so recognized), and her Council House is a National Parks Service Historic Site which houses the Mary McLeod Bethune Memorial Museum and the National Archives for Black Women’s History. Her many honorary awards and degrees include Commander of the Order of the Star of Africa from Liberia, and the highest award of the Haitian government, the Haitian Medal of Honor and Merit, in 1949. She is buried on the Bethune-Cookman College campus.