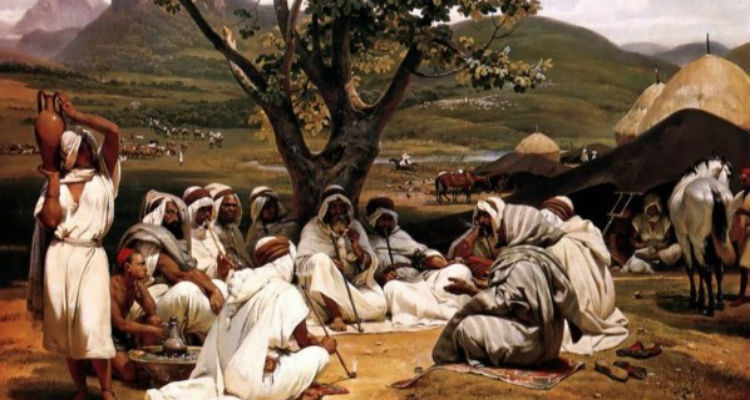 [dropcap size=small]M[/dropcap]uhammad ibn Tumart (ca. 1080-1130) was a North African religious reformer who founded the Almohad movement in North Africa. His organization of Berber warriors led to the end of Almoravid Dynasty in North Africa.

Muhammad ibn Tumart was a Mesmuda Berber from the Atlas Mountain region of Morocco. Of these people, James E. Brunson and Runoko Rashidi wrote that:

“The Mesmuda Berbers were described as Blacks by Abu Shama in his Kitab al-Ravdatayn.

Ibn Tumart was born sometime between 1078 and 1082. His name is given alternatively as Muhammad ibn Abdallah or Muhammad ibn Tumart. The name “Tumart” or “Tunart” comes from the Berber language and means “good fortune”, “delight” or “happiness”. He showed remarkable piety as a youth and was nicknamed Asafu (Berber for “firebrand” or “lover of light”) for his habit of lighting candles at mosques. In pursuit of religious learning he left home in 1105 to visit the principal cities of Islamic civilization. He studied in Cordova and also travelled to the East to complete his religious education. Studying with various scholars along the way, Ibn Tumart developed a particularly strict interpretation of the Koran, one that emphasized each believer’s personal responsibility for the faith of his community.

After his studies in Baghdad, Ibn Tumart is claimed in one account to have proceeded on pilgrimage to Mecca (hajj), but was expelled from the city. He proceeded to Cairo, and then to Alexandria, where he took a ship back to the Maghreb. The journey was not without incident – Ibn Tumart took it upon himself to toss the ship’s flasks of wine overboard and set about lecturing (or harassing) the sailors to ensure they adhered to correct prayer times and number of genuflections; in some reports, the sailors got fed up and threw Ibn Tumart overboard, only to find him still bobbing a half-day later and fished him back (he is also reported in different chronicles of having either caused or calmed a storm at sea). 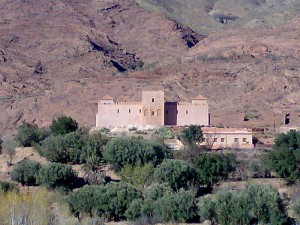 Mosque erected in 1156 in honor of Ibn Tumart at Tinmel, once part of a large fortified complex, the first headquarters of the Almohads

About 1118 he returned to North Africa, where he preached in towns and villages against the immoral behavior of the inhabitants, calling upon them to act in accordance with the strictures of Islamic law. Waving his puritan’s staff among crowds of listeners, Ibn Tumart complained of the mixing of sexes in public, the drinking of wine, the playing of musical instruments, and the fashion of veiling men unveiling women (a custom among the Sanhaja Berbers of the Sahara Desert, that had spread to urban centers with the Almoravids).

Setting himself up on the steps of mosques and schools, Ibn Tumart challenged everyone who came close to debate. His antics and fiery preaching prompted fed-up authorities to hustle him along from town to town. After being expelled from Bejaia, Ibn Tumart set himself up at an encampment in Mellala (a few miles south of the city), where he began receiving his first followers and adherents. Among these were al-Bashir (a scholar, who would become his chief strategist), Abd al-Mu’min (a Zenata Berber who would become his eventual successor) and Abu Bakr Muhammad al-Baydhaq (who would later write the Kitab al-Ansab, the chronicle of the Almohads.) It was at Mellala that Ibn Tumart and his close companions began forging a plan of political action.

In 1120, Ibn Tumart and his small band of followers headed west into Morocco. He stopped by Fez, the intellectual capital of Morocco, and engaged in polemical debates with the leading scholars of the city. Having exhausted them, the ulama of Fez decided they had enough and expelled him from the city. He proceeded south, hurried along from town to town like a vagabond (reportedly, he and his companions had to swim across the Bou Regreg, as they could not afford the ferry passage). Shortly after his arrival in Marrakesh, Ibn Tumart is said to have successfully sought out the Almoravid ruler Ali ibn Yusuf at a local mosque. In the famous encounter, when ordered to acknowledge the presence of the emir, Ibn Tumart reportedly replied “Where is the emir? I see only women here!” – an insulting reference to the veil worn by the Almoravid ruling class. According to another source, Ibn Tumart threw the sultan’s own sister from her horse for appearing in public without a veil.

Charged with fometing rebellion, Ibn Tumart defended himself before the emir and his leading advisors. Presenting himself as a mere scholar, a voice for reform, Ibn Tumart set about lecturing the emir and his leading advisors about the dangers of innovations and the centrality of the Sunnah. When the emir’s own scholars reminded him the Almoravids too embraed puritanical ideals, and were committed to the Sunnah, Ibn Tumart pointed out that the Almoravids professed puritanism had been clouded and deviated by “obscurantists”, drawing attention to the ample evidence of laxity and impiety that prevailed in their dominions. When countered that at least on points of doctrine, there was little difference between them, Ibn Tumart brought out more emphasis on his own peculiar doctrines on the tawhid and the attributes. After a lengthy examination, the Almoravid jurists of Marrakesh concluded Ibn Tumart, however learned, was blasphemous and dangerous, and recommended he should be executed or imprisoned. The Almoravid emir, however, decided to merely expel him from the city, after a flogging of fourteen lashes. 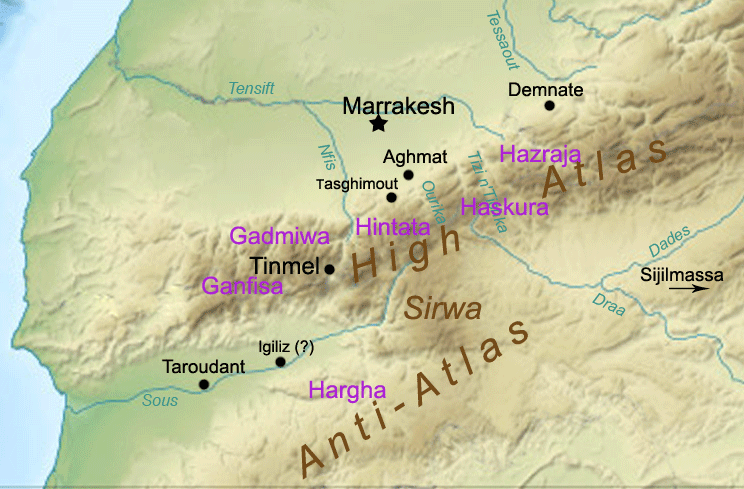 Ibn Tumart returned to his birthplace in the Atlas Mountains, where he set about recruiting disciples among his fellow Mesmuda men. In time, a small band of devotees gathered around him, and a new movement was born with both a religious and political agenda. Ibn Tumart called them the Unitarians. In Spanish accounts, they are called the Almohads.

One story has it that he would teach the Koran to the mountain Berbers word by word. Men were lined up, taught their word, and then made to recite in turn. Working together in this way the Berbers could reproduce the resonant Arabic poetry of the Koran and embody the holy text. Another story has it that Ibn Tumart had thousands of men killed in a four-day purge, with family members directed to put one another to the sword. True or not, these stories suggest the ability of Ibn Tumart to reorganize the fractious mountain clans into a new social, religious, and military order.

In 1121 Ibn Tumart proclaimed himself to be the long-awaited Mahdi—the “rightly guided one,” chosen to purify the community of the faithful before the end of the world. Righteousness was to be attained by belief in Ibn Tumart’s doctrine of the absolute unity of God and adoption of the Koran and prophetic tradition (hadith) as the sole sources of Islamic law; justice was to be restored by fighting in Ibn Tumart’s armies to overthrow the heretical Almoravid government.

An attempt by the Almoravid rulers to smash the movement led Ibn Tumart to move in 1125 from his birthplace to an even more inaccessible mountain village, Tinmel. For the next 5 years he recruited the bulk of his warrior disciples, and organized them into an obedient and disciplined fighting force. He launched a military campaign against Marrakesh in 1130, but he was defeated.

(In a bizarre and chilling footnote in the aftermath, it is said that Ibn Tumart returned to the battlefield at night with some of his followers, and ordered them to bury themselves in the field with a small straw to breathe by. Then, to invigorate the rest of the demoralized Almohads, he challenged those who doubted the righteousness of their cause, to go to the battlefield and ask the dead themselves if they were enjoying the blisses of heaven after falling in the fight for God’s cause. When they heard the positive reply from the buried men, they were assuaged. To prevent the ruse from being revealed, it is said Ibn Thumart left them buried there, filling their straws so they would suffocate.)

Ibn Tumart fell ill and died on (or around) 20 August 1130, only a few months after the disastrous defeat’

17 years after his death, the Almohads managed to defeat the Almoravids.