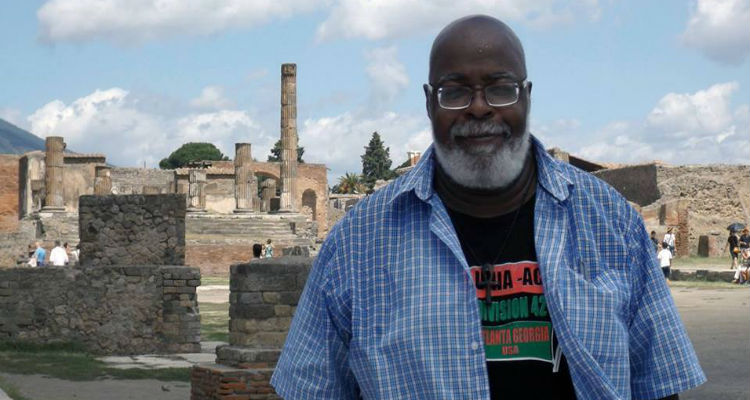 Runoko Rashidi is an African American historian, anthropologist and public lecturer, and the world’s leading authority on the African presence in Asia, Australia, and the Pacific Islands. A much sought after speaker, Rashidi has been educating the world on the African foundations of world civilizations for over forty years. He is the author or editor of eighteen books, the most recent of which are Black Star: The African Presence in Early Europe and African Star over Asia: The Black Presence in the East.

Born in 1954 and raised in South Central Los Angeles, Rashidi grew up during the Black Power Movement. The name Runoko Rashidi was given to him when he was 18 or 19 years old. The name Runoko comes from the Shona community in Zimbabwe and means handsome and Rashidi is Kiswahili, from Tanzania meaning counselor or teacher.  Rashidi’s love for Black history was cultivated early when he read some of the history of Marcus Garvey and heard the speeches of Malcolm X.  At the age of 18, Rashidi read The Destruction of Black Civilization by Chancellor Williams. That book, he says put him on his path as a historian. He became an advocate of Pan-Africanism, travelling the world documenting the ancient African diaspora in a quest he calls ‘The Global African Presence’.

Rashidi went to public school in Los Angeles, but joined a study group and then went to California State University at Northridge. He briefly studied anthropology and archeology at U.C.L.A.  In 1981, Rashidi met his major scholarly influence: Dr. Ivan Van Sertima, who was the leading authority in the world on the African Presence in pre-Colonial America and the founder of the Journal of African Civilization. Under Dr. Van Sertima’s wings, Rashidi became a prolific writer and essayist.

As an essayist, Rashidi’s articles have appeared in more than seventy-five publications. His historical essays have been prominently featured in virtually all of the critically acclaimed Journal of Civilizations anthologies, and cover the broad spectrum of the African presence globally. Rashidi’s Journal of African Civilizations essays include: “African Goddesses: Mothers of Civilization,” “Ancient and Modern Britons,” “The African Presence in Prehistoric America,” “A Tribute to Dr. Chancellor James Williams,” “Ramses the Great: The Life and Times of a Bold Black Egyptian King,” “The Moors in Antiquity,” “The Royal Ships of the Pharaohs,” and the “Nile Valley Presence in Asian Antiquity.”

Rashidi continues to lecture and tour the world; he has visited 104 countries and lectured in fifty nine different countries, for over forty years; such as Australia, Barbados, Belize, Canada, Costa Rica, Curacao, Egypt, England, France, Guyana, India, Japan, Namibia, the Netherlands, Russia, Thailand, Trinidad, Venezuela and Zimbabwe. As a public lecturer, during the past twenty years he has made major presentations at more than 125 colleges, universities, secondary schools, libraries, book stores, churches and community centers.

Runoko Rashidi’s major mission in life is the uplift of African people, those at home and those abroad. He is the official Traveling Ambassador for Marcus Garvey’s Universal Negro Improvement Association and African Communities League. Currently based in Los Angeles he regularly leads African-heritage tours and offers history courses online at http://drrunoko.com/.

Thank you for the work, time and efforts you are putting in to teach The American African who we are as a people. Our children desperately need this information so they can hold their heads high knowing the blood that runs through their veins. Ase’

Your work is sooo important. Thank you for the Educational links