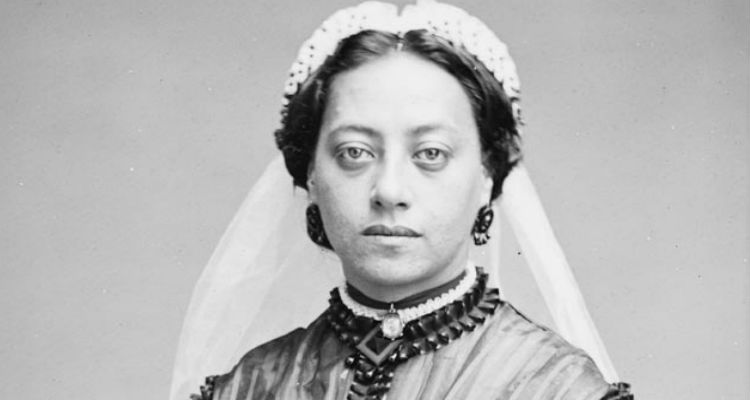 [dropcap size=small]M[/dropcap]ary Ellen Pleasant was a 19th-century African American entrepreneur who used her fortune to further the abolitionist movement. She worked on the Underground Railroad across many states and then helped bring it to California during the Gold Rush Era. She was a friend and financial supporter of John Brown, and was well known in abolitionist circles. After the Civil War, she took her battles to the courts in the 1860s and won several civil rights victories, one of which was cited and upheld in the 1980s and resulted in her being called “The Mother of Human Rights in California”.

Mary Ellen Pleasant was born on Aug. 19, 1814 in Virginia. In one version of her memoirs dictated to her god-daughter, Charlotte Downs, she claimed she was born as the enslaved daughter of a Voodoo priestess and the youngest son of a Governor of Virginia, James Pleasants. Around the age 10 to 13 years, she worked as a bond servant to a storekeeper, “Grandma” Hussey. She worked out her bondage, then became a family member and lifelong friend to Grandma’s granddaughter Phoebe Hussey Gardner. The Husseys were deeply involved in the abolitionist movement, and Pleasant met many of the famous abolitionists.

She later married James Smith, a wealthy flour contractor and plantation owner who had freed his bondpeople (enslaved Blacks) and was able to pass as white. Pleasant and Smith worked on the Underground Railroad, transporting fugitives to northern states such as Ohio and even as far as Canada. Smith died four years later, leaving instructions and money for Pleasant to continue her work as a conductor.

Pleasant then married John James Pleasant around 1848. They continued Smith’s work for a few more years, when increasing attention from slavers forced a move to New Orleans. J.J. Pleasants appears to have been a close relative of Marie Laveau’s husband, and there is some indication that Pleasant and Laveau met and consulted many times before Pleasant left New Orleans by boat for San Francisco in April 1852. J.J. had gone ahead and written back that the area seemed promising for the Underground Railroad.

When Pleasant arrived in San Francisco, she passed as whyte, using her first husband’s name among the whytes, and established several restaurants for California miners, the first named the Case and Heiser. She met most of the founders of the city as she catered lavish meals, and she benefited from the tidbits of financial gossip and deals usually tossed around at the tables. She engaged a young clerk, Thomas Bell, at the Bank of California and they began to make money based on her tips and guidance. Thomas made money of his own, especially in quicksilver, and by 1875 they had amassed a 30 million dollar fortune between them.

When she heard of John Brown’s desire to incite Maafa (slavery) rebellions, she left San Francisco from 1857 to 1859 to help him. She supposedly met with him in Canada in 1858, handing him $30,000 of her own money to further his cause. When Brown’s attempt to seize the arsenal at Harpers Ferry failed, authorities began searching for her, though she was able to disguise herself and find her way back to San Francisco under the name of Mrs. Ellen Smith. When Brown was captured, he had a note in his pocket that said, “The ax is laid at the root of the tree. When the first blow is struck, there will be more money to help.” The note was signed with the initials “MEP” (which were misread as “WEP”) and Pleasant was not caught.

She returned to San Francisco to continue her work there, where she was known as the “Black City Hall”. Pleasant did not conceal her race from other Blacks, and was adept at finding jobs for those brought in by Underground Railroad activities. She placed former bondpeople as servants in homes all over the city, creating a communication network for the receipt of gossip and information, in the much the same way that her contemporary, the voodoo priestess Marie Laveaux, built a power base in New Orleans.
Some of the people she sponsored became important Black leaders in the city.

After the Civil War, Pleasant publicly changed her racial designation in the City Directory from “Whyte” to “Black”, causing a little stir among some whytes. She began a series of court battles to fight laws prohibiting Blacks from riding trolleys and other such abuses, most of which she won.

Later in life, a series of court battles with Sarah Althea Hill, Senator William Sharon, and Thomas Bell’s widow damaged Pleasant’s reputation and cost her resources and wealth. Pleasant died in San Francisco, California on January 4, 1904 in poverty. At her request, her gravestone contained the words: “She was a Friend of John Brown.”

Pleasant has been featured or mentioned in several works of fiction. Michelle Cliff’s 1993 book Free Enterprise is subtitled A Novel of Mary Ellen Pleasant and features her abolitionist activities. The ghost of Mary Ellen Pleasant is a character in the 1997 novel Earthquake Weather, by Tim Powers. Karen Joy Fowler’s historical novel Sister Noon, published in 2001, features Pleasant as a central character, and Thomas Bell and Teresa Bell as secondary characters.

Pleasant has also been discussed in film and television. The 2008 documentary Meet Mary Pleasant covered her life, and a segment of a 2013 episode of the Comedy Central series Drunk History covered Pleasant’s life. Pleasant was portrayed by Lisa Bonet.

In 1974, the city of San Francisco designated eucalyptus trees that Pleasant had planted outside her mansion at the southwest corner of Octavia and Bush streets in San Francisco as a Structure of Merit. The trees and associated plaque are now known as Mary Ellen Pleasant Memorial Park, which is the smallest park in San Francisco. Her burial site has been designated a “Network to Freedom” site by the National Park Service.

As a native Bay Area Californian with roots in New Orleans and Virginia, it’s a shame that I had never heard of this glorious freedom fighter, Mary Ellen Pleasant. For some reason, she and her husband may be behind the name of Pleasanton, California for the way the Pleasanton Museum’s website omits the origin of the town’s name. Interesting read.