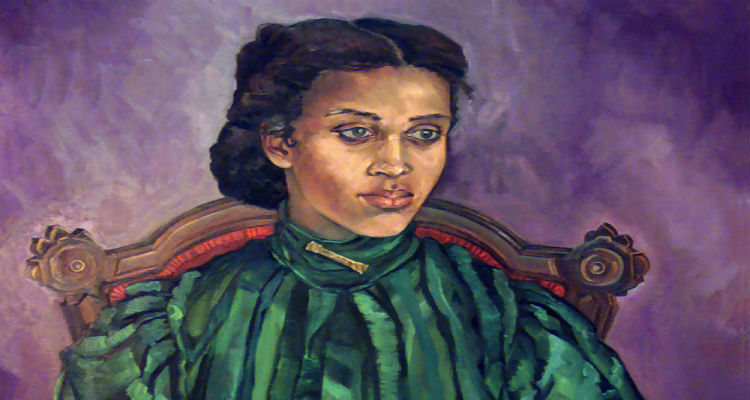 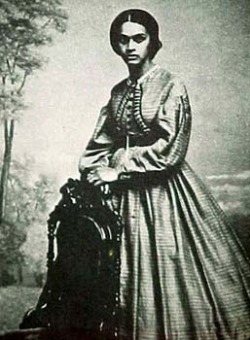 Sarah Loguen was born as Sarah Marinda Loguen on January 29, 1850, in Syracuse, New York, the fifth of eight children to the Rev. Jermain Wesley Loguen, a self-emancipated abolitionist; and his wife, Caroline Loguen, the daughter of prominent local abolitionists. In 1848, Rev. Loguen purchased a plot of land in Syracuse for eight hundred dollars from Joseph and Sarah Chapman. On this land a house was built and a forty- by fifty-foot section was reserved to create a school for African American children. Loguen’s home also became a safe house for fugitives in the Underground Railroad. In collaboration with Harriet Tubman and Frederick Douglass, Rev. and Mrs. Loguen helped at least 1,500 fugitives as they travel safely on their way to freedom in Canada, earning Rev. Loguen the nickname “The Underground Railroad King” (Syracuse Journal, Oct. 1 1872; Mar 6, 1858). In 1868 Rev. Loguen became a Bishop in the African Methodist Episcopal (AME) Church the same year Sarah graduated from high school.

After high school, Fraser began working for her father as his secretary, and studied German as a hobby. In 1872, when Loguen was twenty-two, her father died and because her mother had died previously in 1867, she became head of the household since her eldest sister, Amelia, had married and moved to Washington, D.C.

Sarah Fraser had gained experience from a young age in helping to treat the injuries and illnesses of fugitives as a result of their enslavement or escape. However, she decided to become a physician, and carry on her family’s work through medicine, in 1873, after witnessing an accident in which a young boy was pinned beneath wagon wheels at a train station, and no one would help him. In her distress at this lack of response, she decided that day she’d be able to make a difference by joining the medical profession, vowing “I will never, never see a human being in need of aid again and not be able to help.”

Her 1873 enrollment in medical school was celebrated by a local Syracuse newspaper which wrote “This is women’s rights in the right direction, and we cordially wish the estimable young lady every success in the pursuit of the profession of her choice.” Fraser spent the next five months shadowing Dr. Michael D. Benedict, the family’s physician. Because of her work with Dr. Benedict she was admitted to the Syracuse School of Medicine on October 3, 1873.

In 1876, Fraser became the first woman to gain an M.D. from Syracuse University School of Medicine and is believed to be only the fourth African-American woman to become a licensed physician in the United States, the second in New York, and the first to graduate from a coeducational medical school. With encouragement of her mentor, Dr. Benedict, she went on to intern in pediatrics and obstetrics in Philadelphia and Boston before opening her own practice in Washington, DC.

While in Washington she met Charles Alexander Fraser, a pharmacist from Santo Domingo (now the Dominican Republic). They got married in her hometown of Syracuse, New York on September 19, 1882, and moved to Santo Domingo where Dr. Fraser became the first female physician in that nation. As her husband’s income was sufficient for the family, she was able to offer free treatment to the poor. By law however, Sarah was only allowed to treat women and children in the Dominican Republic because of sexism. The couple gave birth to Gregoria Alejandria Fraser in 1883. The following year, however, Charles Fraser died of a stroke.

When her husband died in 1894, Dr. Fraser found that the task of managing his pharmacy and plantation as well as trying to continue her medical work was too great. She therefore sold up and returned to the United States with her daughter, where she found she was unable to start the private practice she had hoped for or get her daughter into the schools she wished due to the increased discrimination and segregationist policies which had taken hold since the reconstruction period. She took her daughter to a school in Paris and when she returned to America, she practiced pediatric medicine from her home in Syracuse, New York and mentored African American midwives. She later moved to Washington DC to be with her sister Amelia.

Dr. Sarah Fraser died at home in Washington, D.C. in the company of her daughter on April 9, 1933. The Dominican Republic declared a nine-day period of national mourning with flags flown at half-mast. A small park in Syracuse honors the Loguen family while the Child Care Center at Upstate Medical University is named in her honor.