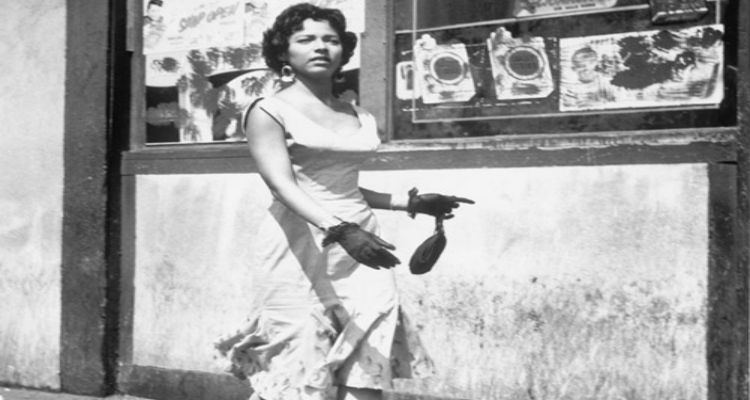 “America was not geared to make me into a Liz Taylor, a Monroe, a Gardner.” ~Dorothy Dandridge

Dorothy Dandridge was the first African-American woman to be nominated for an Academy Award for best actress.

Dandrige was born on November 9, 1922, in Cleveland, Ohio to Ruby Dandridge (née Ruby Jean Butler), an actress, and Cyril H. Dandridge, a cabinet maker and minister. Dandridge never knew her father. Her mother, left her father while she was pregnant with Dorothy. Dandridge later suffered at the hands of her mother’s girlfriend, Geneva Williams. Williams was the disciplinarian in the family and was known for being strict and cruel with Dandridge.

Dandridge was started out in show business at a young age, encouraged by her mother. She performed with her sister Vivian for a time as a song-and-dance team billed as “The Wonder Children.” The girls performed throughout the South, usually in black Baptist churches. Her mother would often join her daughters on stage. As the depression worsened, her family moved to Los Angeles where they had hopes of finding better work, perhaps in film.

In Los Angeles, she found some success with her musical trio, the Dandridge Sisters. The group included Dorothy, her sister Vivian and Etta Jones. They performed with the Jimmy Lunceford Orchestra and Cab Calloway. The duo even played gigs at the famous Cotton Club in Harlem. As an African American singer, Dandridge confronted early on the segregation and racism of the entertainment industry. She may have allowed on stage, but in some venues she couldn’t eat in the restaurant or use certain facilities because of the color of her skin.

As a teenager, Dandridge began to appear in small roles in a number of films. She and her sister appeared in the Marx Brothers film A Day at the Races (1937). The Dandridge Sisters appeared in Going Places (1939) with Louis Armstrong. On her own, she danced with Harold Nicholas of the dancing Nicholas Brothers in the 1941 Sonja Henie musical Sun Valley Serenade. The duo’s tap-dancing routine was cut from the version of the film shown in the South. She played an African princess in Drums of the Congo (1942).

That same year, she married Harold Nicholas. But their union proved to be anything but a happy one. During their turbulent marriage, Dandridge virtually retired from performing. Nicholas reportedly liked to chase other women. But her greatest heartbreak came in 1943 with the birth of her first and only child. She was stuck home alone when she went into labor. Dandridge blamed her husband for their daughter’s severe brain damage.

After her divorce in 1951, Dandridge returned to the nightclub circuit, this time as a successful solo singer. After a stint at the Mocambo club in Hollywood with Desi Arnaz’s band and a sell-out 14-week engagement at La Vie en Rose, she became an international star, performing at glamorous venues in London, Rio de Janeiro, San Francisco, and New York. She won her first starring film role in 1953’s Bright Road, playing an earnest and dedicated young schoolteacher opposite Harry Belafonte.

Her next role, as the captivating lead in Carmen Jones (1954), that also co-starred Belafonte, catapulted her to the heights of stardom. (Nineteen-year-old Marilyn Horne tackled the singing demands of the character.) “[It] was the best break I ever had,” Dandridge once said of the film. With her sultry looks and flirtatious style, Dandridge became the first African-American to earn an Academy Award nomination for best actress. Though many believed she deserved to win, Dandridge eventually lost the award to Grace Kelly (The Country Girl). Still, after the phenomenal success of Carmen Jones, Dandridge seemed well on her way to becoming the first non-whyte actress to achieve the kind of superstardom that had accrued to contemporaries like Marilyn Monroe and Ava Gardner. In 1955, she was featured on the cover of Life magazine and was treated like visiting royalty at that year’s Cannes Film Festival.

Despite the nomination for her performance, in the years that followed, Dandridge had trouble finding film roles that suited her talents. She wanted strong leading roles, but she found her opportunities limited because of the racist nature of the film industry. Belafonte reportedly said that Dandridge “was the right person in the right place at the wrong time,” according to the Boston Globe.

In the racially disharmonious 1950s, Hollywood filmmakers could not seem to create a suitable role for Dandridge. She appeared in several poorly received racially and sexually charged dramas, including Island in the Sun (1957), also starring Belafonte and Joan Fontaine; Tamango (1959), in which Dandridge plays the mistress of the captain of a slave ship; and Malaga (1960). Her most noteworthy film from this period was Porgy and Bess (1959). The last movie she would ever play would be in 1961’s The Murder Men (1961). Dorothy faded quickly after that with a poor second marriage, poor investments, other financial woes, and a problem with alcohol.

While making Carmen Jones, Dandridge became involved in a heated, secretive affair with the film’s director, Otto Preminger, who also directed Porgy and Bess. Their interracial romance, as well as Dandridge’s relationships with other whyte lovers, was frowned upon, not in the least by other African-American members of the Hollywood filmmaking community. On the rebound, she married her second husband, Jack Denison, in 1959, which proved to be another troubled relationship. He was verbally abusive and mishandled her money. She lost much of her savings to bad investments, including Denison’s restaurant, which failed in 1962. He left her soon after.

As her film career and marriage failed, Dandridge began drinking heavily and taking antidepressants. The threat of bankruptcy and nagging problems with the IRS forced her to resume her nightclub career, but she found only a fraction of her former success. Relegated to second-rate lounges and stage productions, Dandridge’s financial situation grew worse and worse. By 1963, she could no longer afford to pay for her daughter’s 24-hour medical care, and Harolyn was placed in a state institution. Dandridge soon suffered a nervous breakdown.

On September 8, 1965, Dorothy Dandridge was found dead in her Hollywood home. It was later ruled that her death was caused by a barbiturate overdose. Dandridge had little more than $2 in her bank account at the time of her death.

She was only 42, when she passed away.

Dorothy Dandridge’s unique and tragic story became the subject of renewed interest in the late 1990s, beginning in 1997 with the release of a biography, Dorothy Dandridge, by Donald Bogle, and a two-week retrospective at New York City’s Film Forum. In 1999, actress Halle Berry won Golden Globe and Emmy awards for her portrayal of Dandridge in an acclaimed HBO movie, Introducing Dorothy Dandridge.