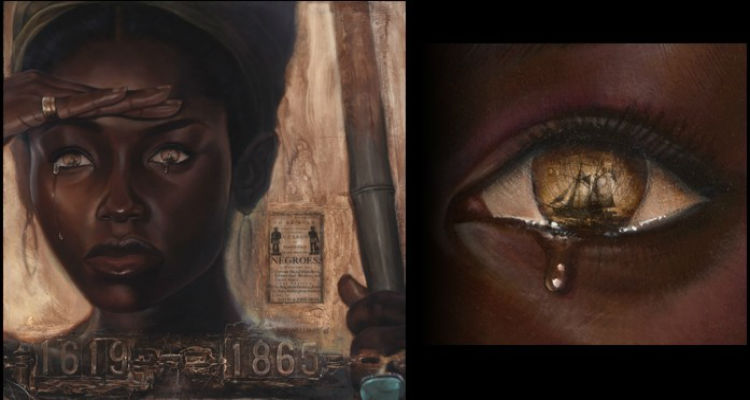 “Your country? How come it yours? Before the Pilgrims landed we were here. Here we have brought our three gifts and mingled them with yours: a gift of story and song — soft, stirring melody in an ill-harmonized and unmelodious land; the gift of sweat and brawn to beat back the wilderness, conquer the soil, and lay the foundations of this vast economic empire two hundred years earlier than your weak hands could have done it; the third, a gift of the Spirit.” ~W. E. B. Du Bois

When and where does African American history start?

According to  Nell Irvin Painter in her book, Creating Black Americans, the history of Black people in the United States is usually dated from the first arrival of about twenty ethnic Ndongans from what is now Angola in West Africa, who arrived in Virginia in 1619 (bringing with them three gifts). Historians are now aware that African people were already present in the Western Hemisphere before 1619. However, because the arrival of the twenty ethnic Ndongans was recorded they became African Americas’ founding generation.

Lerone Bennett Jr. in his book, Before The Mayflower, dramatically recounted the story of their landing:

“She came out of a violent storm with a story no one believed, a name no one recorded and a past no one investigated. She was manned by pirates and thieves. Her captain was a mystery man named Jope, her pilot an Englishman name Marmaduke, her cargo an assortment of Africans with sonorous Spanish names — Antoney, Isabella, Pedro.

A year before the arrival of the celebrated Mayflower, 113 years before the birth of George Washington, 244 years before the signing of the Emancipation Proclamation, this ship sailed into the harbour at Jamestown, Virginia, and dropped anchor into the muddy waters of history. It was clear to the men who received this “Dutch man of War” that she was no ordinary vessel. What seems unusual today is that no one sensed how extraordinary she really was. For few ships, before or since, have unloaded a more momentous cargo.

From whence did this ship come?

From somewhere on the high seas where she robbed a Spanish vessel of a cargo of Africans bound for the West Indies.

Why did she stop at Jamestown, the first permanent English settlement in America?

No one knows for sure. The captain “pteneded,” John Rolfe noted, that he was in great need of food and offered to exchanged his human cargo for “victualle.” the deal was arranged. Antoney, Isabella, Pedro and seventeen other Africans stepped ashore in August 1619. The story of Black American began.

It began in a way, with Antoney. And it began with a love story. Antoney, who had no surname, fell in love with Isabella and married her. In 1623 or 1624 Isabella gave birth to the first Black child born in English America. The child, a boy named William, was baptized in the Church of England.”

Recent research has corrected the actual place of landing from Jamestown to Point Comfort. According to Calvin Pearson of  www.project1619.org:

The evidence to support a landing at Point Comfort comes from a letter that John Rolfe wrote back to England on September 30, 1619, which states.

“About the latter end of August, a Dutch man of Warr of the burden of 160 tons arrived at Point Comfort, the Commanders name was Capt. Jope. He brought not anything but 20 and odd [Blacks].”

Thus the “first” African-Americans were twenty or so people from the Ndongo kingdom of present-day Angola.

Of the Ndongans, Painter wrote:

“The Ndongans had fallen victim to a brutal wave of warfare that had begun some twenty years earlier. They had been kidnapped by a band of African marauders, known as Imbangala, allies of the Portuguese slave traders on the Atlantic coast at Luanda.

In the late sixteenth century, warring African aristocrats had formed alliances with the Portuguese of the colony around Luanda, founded in 1575. Portuguese merchants in Luanda on the Atlantic coast were selling firearms to Imbangala warriors. The Imbangala were a band of as many as sixteen thousand warriors from the central highlands of Angola who were willing to sell to the Portuguese the people they defeated. With European firearms the Imbangala over-powered everyone else and took captives on a massive scale.

From 1618 to 1619, Imbangala warriors and Portuguese forces attacked Kabasa, the royal capital of the inland kingdom of Ndongo situated about 200 miles southeast of Luanda. The Ndongo kingdom consisted of large towns enclosed with woven grass stockades. Kabasa contained 5,000 to 6,000 dwellings and 20,000 to 30,000 people. The rural people raised millet and sorghum. Ndongans tended large herds of cattle and also raised domestic animals such as goats, chickens and guinea fowl. They wore bark and cotton clothing they both made themselves and imported from the kingdom of Kongo to the north. Ndongans traded in local and regional markets where they bought iron, steel, and salt from the region south of the Kwanza River.

The year 1619 turned out to be a perversely banner year for slaving in Luanda. In that year alone, thirty-six slave ships full of captives–more than ever before-set out across the Atlantic, full of people destined for resale and deadly, unpaid labor on the plantations of Portuguese and Spanish South America.

One ship, the São João Batista, headed for Vera Cruz, Mexico, was attacked by a Dutch Warship and forced toward the east Coast of North America.

The twenty Ndongan men and women of the São João Batista were not the first Africans in Virginia. A census taken in the spring of 1619 noted the presence of thirty-two Afro-Virginians whose names, origins, dates of arrival, and ethnicity were not noted. But because the the arrival of the Ndongans in Virginia was recorded, they, not their predecessors, entered history as African Americans’ founding general.”

Excellent article, many thanks.