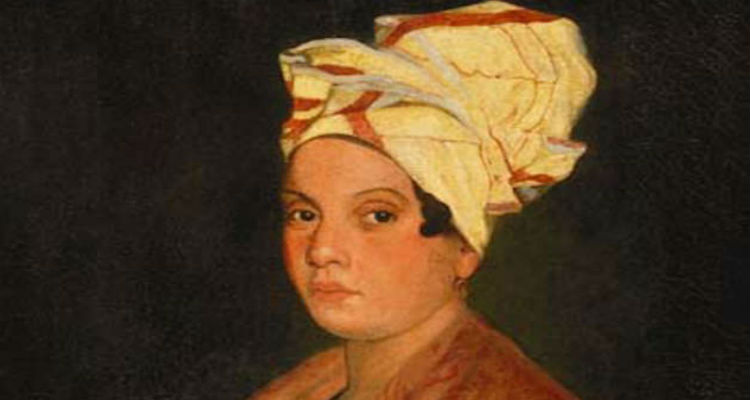 Marie Laveau is the most renowned Voodoo figure in the history of North America. For several decades Marie Laveau held New Orleans spellbound, as her occult powers became legendary. The crypt where she’s buried, New Orleans’ Saint Louis Cemetery No. 1., is believed to be the most haunted cemetery in America. Her tomb is the object of adoration and the site of Voodoo offerings. Visitors claim to have seen the ghost of the Voodoo Queen herself, inside the cemetery, walking around tombs, in her trademark turban. When people make a wish at her tomb, they return if their wish comes true and leave three X marks as a sign of their gratitude.

Marie Catherine Laveau, was born in New Orleans on September 10, 1801, (although most accounts have her being born in 1794) as a free woman of color. The details of Laveau’s life are elusive and ambiguous, and not much is known of her early years. She is believed to be the illegitimate daughter of a rich Creole plantation owner, Charles Laveaux, and his mistress Marguerite (who was reportedly half black, half Indian). Historians believe that her mother and grandmother were voodoo priestesses.

Laveau was married on August 4, 1819 to Jacque Santiago Paris. The couple were married at St Louis Cathedral on Jackson Square and the service was performed by Father Antonio de Sedella, also known as Pere Antoine. Her married life was short lived. She had two children, both of which are believed to have died young; and her husband, Paris, also passed away under mysterious circumstances. By the time she was in her 20s she was known as the Widow Paris.

The Widow Paris learned her craft from a “voodoo doctor” known variously as Doctor John, John Bayou, and other appellations. The Voodoo religion was originally brought to the New Orleans by enslaved West African, and evolved as Black people escaped to New Orleans during the Haitian Revolution from 1794 and 1801. By 1830 Laveau was one of several New Orleans voodoo queens, but was deemed the most powerful. She soon came to dominance, taking charge of the rituals held at Congo Square.

Laveau worked as a hairdresser at her house on St. Ann Street. Most of her clients were wealthy elite women. This gave her access to the gossip of the whytes in the city, as well as their servants who, by that time, believed her to be a powerful voodoo priestess, although she was also a devout Catholic, who regularly attended mass, and encouraged others to do the same. Laveau reportedly developed a network of informants. According to Robert Tallant, author of Voodoo in New Orleans, (1946), “No event in any household in New Orleans was a secret from Marie Laveau.” By all outward appearances Marie Laveau seemed to know, magically, information about her clients and their lives. In a very short time she was thought to have “special powers” as a mystic. With the enslaved servants, free persons of color and whyte communities now believing in her powers, Laveau became very popular and sought out by those individuals who wished her to help them. She told fortunes, gave advice on love, and prepared potions called gris-gris for anyone needing to effect a cure, charm, or hex.

A year after the death of Jacques Paris, Laveau began a relationship with Louis Christophe Dominick Duminy de Glapion who had fought gallantly against the British in the defense of New Orleans. They had seven children together. Unfortunately, only two of her children survived past childhood. In all, it’s believed Laveau gave birth to 15 children, of which one lived to adulthood.

Folklore and later newspaper accounts, confirm that she was the Voodoo Queen of New Orleans for at least 40 years from the 1820’s to the 1860’s. “New Orleans Voodoo as a social phenomenon came into its heyday during the 1800’s. Under Marie Laveau’s guidance Voodoo thrived as a business, served as a form of political influence, provided a source of spectacle and entertainment, and was a means of altruism.” Laveau injected herself into every aspect of New Orleans life and was sought after by members of every social class within the city. She was known far and wide for her prowess in the arts of magic and healing. She staged ceremonies in which participants became possessed by loas (voodoo spirits) and danced naked around bonfires. In 1874, when she officiated over the St. John’s Eve rites on the shores of Lake Pontchartrain, the crowd numbered nearly 12,000.

Laveau was also very successful as a nurse; wonderful stories being told of her exploits at the sickbed. In yellow fever and cholera epidemics she was always called upon to nurse the sick, and always responded promptly. Her skills and knowledge earned her the friendship and admiration, of those sufficiently cultivated, but the ignorant attributed her success to unnatural means and held her in constant dread. Many condemned her as a witch while others praised her as a saint.

Legend has it that the Voodoo Queen had the power to put a person into or out of City Hall, and was accused of causing the deaths, through voodoo, of both a lieutenant governor and a governor. She also saved several condemned men from the gallows. Perhaps her most celebrated mystic feat was the rescue of a Frenchman from the gallows early in her career. In some versions of the story, she invoked a great storm that caused the noose to slip from the convict’s neck. In more elaborate tales, she is said to have magically influenced a New Orleans magistrate to set the accused free.

While some of the tall tales surrounding her supernatural feats were likely not true, Laveau was particularly adept at promulgating her own PR, and was known to both embrace and aggrandize accounts of her powers. One such belief was that Laveau had found a way to restore her youth. First-person accounts arose of a young Laveau seen traversing the city streets of New Orleans, when only weeks before, visitors left her ailing, bedridden, and well past her prime.

From the 1860s, Marie ceased practicing voodoo in public. About 1875 Laveau, bereft of her youth and memory, became confined to her home on Rue St. Ann and did not leave until claimed by death some six years later, on June 15, 1881, at the age of 98.

“Those who have passed by the quaint old house on St. Ann, between Rampart and Burgundy streets with the high frail looking fence in front over which a tree or two is visible, have been within the last few years, noticed through the open gateway a decrepid old lady with snow white hair, and a smile of peace and contentment lighting up her golden features. For a few years past she has been missed from her accustomed place. The feeble old lady lay upon her bed with her daughter and grand children around her ministering to her wants.”

The paper went on to write that she died with a smile on her face, and was buried in the family tomb at 5PM, in St. Louis Cemetery #1. Her funeral was attended by throngs of people.

However, after her death, the legend of Marie Laveau continued to grow. “It was then,” reports Tallant “that the strangest part of the entire Laveau mystery became most noticeable. For Marie Laveau still walked the streets of New Orleans, a new Marie Laveau, who also lived in the St. Ann Street Cottage.

Laveau had a look-alike daughter, Marie Laveau II, who followed in her footsteps, and was known for her “wild rituals in the swamps around New Orleans.” It’s believed that Laveau II drowned while crossing the flooded Lake Pontchartrain, but a contemporary of Laveau II told Tallant that he had been present when Laveau II died of a heart attack at a ball in 1897, and insisted that: “She was buried in the Basin Street graveyard they call St. Louis No. I, and she was put in the same tomb with her mother and the rest of her family.”

The Encyclopedia of Ghosts and Spirits asserts: “One popular legend holds that Marie Laveau never died, but changed herself into a huge black crow which still flies over the cemetery.” Indeed, “Both Maries are said to haunt New Orleans in various human and animal forms”

One alleged Laveau ghost sighting stands out. Tallant relates the story of an African-American named Elmore Lee Banks, who had an experience near St. Louis Cemetery No. 1. As Banks recalled, one day in the mid-1930s “an old woman” came into the drugstore where he was a customer. For some reason she frightened the proprietor, who “ran like a fool into the back of the store.” Laughing, the woman asked, “Don’t you know me?” She became angry when Banks replied, “No, ma’am,” and slapped him. Banks continued: “Then she jump[ed] up in the air and went whizzing out the door and over the top of the telephone wires. She passed right over the graveyard wall and disappeared. Then I passed out cold.” He awakened to whiskey being poured down his throat by the proprietor who told him, “That was Marie Laveau.”