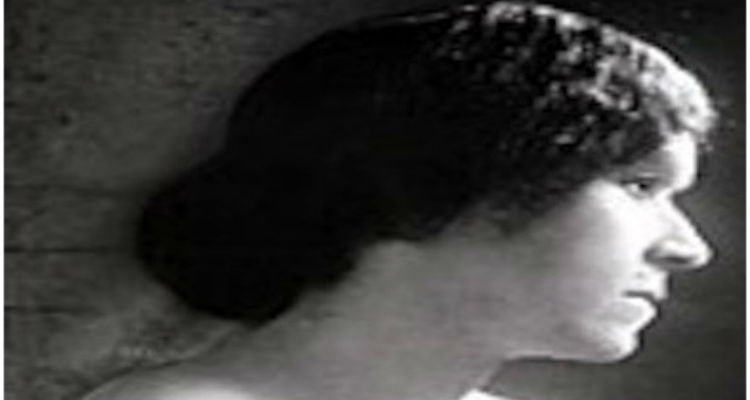 Georgia Douglas Johnson was one of the earliest African-American female poets to gain widespread recognition. As part of the Harlem Renaissance of the 1920s, Johnson was the most prolific Black woman writer of her time. She is credited with writing over 200 poems, 28 plays, and 30 songs, and editing 100 books between 1918 and 1930. Johnson published four collections of poetry: The Heart of a Woman (1918), Bronze (1922), An Autumn Love Cycle (1928), and Share My World (1962). Her home in Washington D.C., where she lived for over fifty years at 1461 S Street NW, was the site of one of the greatest literary salons of the Harlem Renaissance.

Johnson was born in Atlanta, Georgia, on September 10, 1880, to parents of African American, Native American, and English descent. Much of her childhood was spent in Rome, Georgia. She received her education in both Rome and Atlanta, where she excelled in reading, recitations and physical education. She also taught herself to play the violin, which developed into a lifelong love of music that appears in her plays, which make distinct use of sacred music. Johnson did not have any siblings and was not very social in school. Her writings reflected a lonely childhood.

She graduated from Atlanta University Normal College, where she met her husband; and studied music at the Oberlin Conservatory and the Cleveland College of Music. As a young woman Johnson was interested in musical composition, but she soon turned to lyrical poetry instead. “Long years ago when the world was new for me, I dreamed of being a composer—wrote songs, many of them,” Johnson was quoted in Gloria T. Hull’s book Color, Sex, and Poetry. After graduation, she taught and worked as an assistant principal in Atlanta and Marietta.

In 1903, Johnson married Henry Lincoln Johnson, an Atlanta lawyer and prominent Republican party member. They had two sons, Henry Lincoln Johnson, Jr., and Peter Douglas Johnson. In 1910, her husband’s job as a lawyer caused the family to relocate to Washington, D.C. It was during this period that Johnson began to write poems and stories. She began to submit poems to newspapers and small magazines. Her first poem was published in 1905 in the literary journal The Voice of the Negro. In 1916 Johnson published three poems, called Gossamer, Fame, and My Little One, in Crisis magazine. This was the beginning of a prolific writing career that would span 50 years. In 1918 she published her first book of poetry called The Heart of a Woman. Johnson’s style of writing reflected her musical inspirations.

In 1925, her husband died when she was aged 45 and she was left to take care of their teenage sons. Johnson claimed that her husband was not very supportive of her writing, preferring her be to a home-maker instead. Even though he often criticized her career as a writer, she published two poems dedicated to him: The Heart of a Woman (1918) and Bronze (1922).

After her husband’s death, Johnson supported her two sons by working a series of temporary jobs between 1924 and 1934 as a substitute public school teacher and a file clerk for the Civil Service. She ultimately found a position with the Commissioner of Immigration for the Department of Labor, where hours were long and pay low. Johnson had to create her own supportive environment by establishing the “Saturday Salons” that she hosted weekly soon after her husband’s death. For many years, Johnson’s house at 1461 S Street NW, was an important meeting place for writers of the Harlem Renaissance in Washington, D.C. The Saturday Nighters’ Club attracted many prominent African-American writers including Jean Toomer, Langston Hughes, Alice Dunbar-Nelson, Zora Neale Hurston, Anne Spencer, Richard Bruce Nugent, Alain Locke, Jessie Redmon Fauset, Angelina Weld Grimké and Eulalie Spence — all major contributors to the Harlem Renaissance.

Johnson also wrote numerous plays, including Blue Blood (1926); a play about the rape of black women by whyte men in the South after the Civil War. The play earned an honorable mention from Opportunity magazine’s play contest. A year later Johnson won first place in the same competition with her folk tragedy called Plumes (performed 1927). Many of her plays were never published because of racism and sexism. Gloria T. Hull is credited with the rediscovery of many of Johnson’s plays. The 28 plays that she wrote were divided into four sections: “Primitive Life Plays”, “Plays of Average Negro Life”, “Lynching Plays” and “Radio Plays”. Several of her plays are lost.

Although she was criticized for not addressing racial issues in her poems, Johnson was a key advocate in the anti-lynching movement as well as a pioneering member of the lynching drama tradition. Her activism was primarily expressed through her plays, first appearing in the play Sunday Morning in the South. This outspoken, dramatic writing about racial violence is sometimes credited with her obscurity as a playwright since such topics were not considered appropriate for a woman at that time.

Unlike many African-American playwrights, Johnson refused to give her plays a happy ending since she did not feel it was a realistic outcome. As a result, she had difficulty getting plays published. Though she was involved in the NAACP’s anti-lynching campaigns of 1936 and 1938, the NAACP refused to produce many of her plays claiming they gave a feeling of hopelessness. Johnson was also a member of the Writers League Against Lynching, which included Countée Cullen, James Weldon Johnson, Jessie Fauset, and Alain Locke. The organization sought a federal anti-lynching bill. Johnson was one of the only women whose work was published in Alain Locke’s anthology Plays of Negro Life: A Source-Book of Native American Drama.

Johnson’s prolific writing career also included a weekly newspaper column, “Homely Philosophy,” that was syndicated by twenty publications from 1926 to 1932; a collaboration with composer Lillian Evanti in the late 1940s that made use of Johnson’s earlier music training at Oberlin Conservatory and the Cleveland College of Music; and an international correspondence club that she organized and ran from 1930 to 1965. Her writing was seriously curtailed by the loss of her Department of Labor job in 1934. She then sought any work she could get, including temporary jobs in a clerical pool, while vainly applying for axis fellowships. As late as the 1960s, Johnson was still applying for fellowships that never materialized. Able to survive by living with her lawyer son, Henry Lincoln, Jr., and his wife, Johnson never lost her enthusiasm for the arts nor her generosity to needy artists who came her way. She called her home “Half-Way House” to represent her willingness to provide shelter to those in need, including, at one point, Zora Neale Hurston. Her home was a place for friends traveling, and a place where they “could freely discuss politics and personal opinions” and where those with no money and no place to stay would be welcome.

“Struggling without the material support that would have helped bring more of her work to light and battling racist stereotypes that fed lynch mobs and race riots in the formative years of her life, Georgia Douglas Johnson left a legacy of indomitable pride and creative courage that has only begun to be understood.”

Johnson died in Washington, D.C., in 1966 after receiving an honorary doctorate in literature from Atlanta University the year before. In September 2009, it was announced that Johnson would be inducted into the Georgia Writers Hall of Fame.