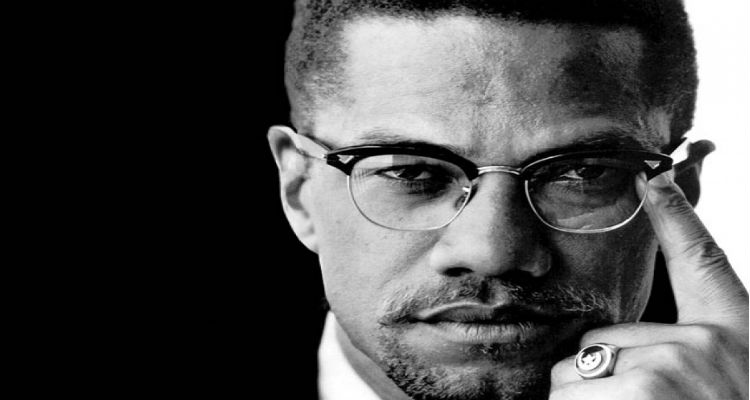 “By any means necessary.”

Malcolm X, born Malcolm Little and also known as el-Hajj Malik el-Shabazz was the greatest and most influential Black Nationalist leader in American history. Articulate, passionate and a naturally gifted and inspirational orator, Malcolm X served as a spokesman for the Nation of Islam, bringing the organization to national and international recognition.

Malcolm X was born on May 19, 1925 in Omaha, Nebraska. His mother, Louise Norton Little, was born in St. Andrew, Grenada, in 1897, and had been raised by her maternal grandmother, Mary Jane Langdon. Louise, as she was known, had a fair complexion and dark long hair; in everyday encounters she was often mistaken for being European. It was said that she was the product of her mother’s rape by a Scotsman. Louise had received an excellent elementary-level education, becoming a capable writer and was fluent in French. Malcolm’s father, Earl Little, was an outspoken Baptist minister and avid supporter of Black Nationalist leader Marcus Garvey. Due to his father civil rights activism, the family faced frequent harassment from Euro-American supremacist groups such as the Ku Klux Klan and one of its splinter factions, the Black Legion. In fact, Malcolm X had his first encounter with racism before he was even born.

When my mother was pregnant with me, she told me later, a party of hooded Ku Klux Klan raiders galloped up to our home in Omaha, Nebraska, one night. Surrounding the house brandishing their shotguns and rifles, they shouted for my father to come out. My mother went to the front door and opened it. Standing where they could see her pregnant condition, she told them that she was alone with her three small children and that my father was away, preaching, in Milwaukee. The Klansmen shouted threats and warnings at her that we had better get out of town because “the good Christian [European] people” were not going to stand for my father “spreading trouble” among the good [Blacks] of Omaha with the “back to Africa” preaching of Marcus Garvey.”

When Malcolm was four, the house where he and his family lived was burned down by members of the Ku Klux Klan. When he was six his father met a violent death that his family always believed was a lynching. His mother suffered an emotional breakdown several years after the death of his father and was committed to a mental institution. Malcolm and his siblings were split up among various foster homes and orphanages.

Malcolm attended West Junior High School, where he was the school’s only Black student. He excelled academically and was well liked by his classmates, who elected him class president. However, he later said that he felt that his classmates treated him more like the class pet than a human being. The turning point in Malcolm X’s childhood came in 1939, when his English teacher asked him what he wanted to be when he grew up and he answered that he wanted to be a lawyer. His teacher responded, “One of life’s first needs is for us to be realistic… you need to think of something you can be… why don’t you plan on carpentry?” Having thus been told in no uncertain terms that there was no point in a Black child pursuing education, he dropped out of school the following year, at the age of 15.

After quitting school, Malcolm moved to Boston to live with his older half-sister, Ella, about whom he later recalled, “She was the first really proud black woman I had ever seen in my life. She was plainly proud of her very dark skin. This was unheard of among [Blacks] in those days.” Ella landed Malcolm a job shining shoes at the Roseland Ballroom. However, out on his own on the streets of Boston, he became acquainted with the city’s criminal underground, soon turning to selling drugs. He got another job as kitchen help on the Yankee Clipper train between New York and Boston and fell further into a life of drugs and crime. Sporting flamboyant pinstriped zoot suits, he frequented nightclubs and dance halls and turned more fully to crime to finance his lavish lifestyle. Malcolm became a master manipulator, skilled in gambling, selling drugs, burglary and hustling. Eventually, he and his long-time friend, Malcolm “Shorty” Jarvis, were arrested and convicted on burglary charges. Malcolm was sentenced to 10 years in prison, although he was granted parole after serving seven years.

In prison, Malcolm underwent a conversion that literally transformed his whole life. To pass the time during his incarceration, he read constantly, devouring books from the prison library in an attempt to make up for the years of education he had missed by dropping out of high school. Also while in prison, he was visited by several siblings who had joined to the Nation of Islam (NOI). Malcolm began to study the teachings of the NOI leader Elijah Muhammad. Muhammad taught that European society actively worked to keep African-Americans from empowering themselves and achieving political, economic, and social success. By the time he was paroled in 1952, Malcolm was a devoted follower of the NOI. He abandoned his surname “Little,” which he considered a relic of the Maafa (Atlantic slavery), in favor of the surname “X”—a tribute to the unknown name of his African ancestors.

Malcolm was appointed as a minister and national spokesman for the Nation of Islam. Elijah Muhammad also charged him with establishing new mosques in cities such as Detroit, Michigan, and Harlem. Malcolm utilized newspaper columns, as well as radio and television, to communicate the NOI’s message across the United States. His charisma, drive, and conviction attracted an astounding number of new members. Due largely to his efforts, the NOI grew from a mere 400 members at the time he was released from prison in 1952 to 40,000 members by 1960. Articulate, passionate and a naturally gifted and inspirational orator, Malcolm’s fame eventually eclipsed that of his mentor Elijah Muhammad.

In 1963, Malcolm X became deeply disillusioned when he learned that his hero and mentor had violated many of his own teachings, most flagrantly by carrying on many extramarital affairs; Muhammad had, in fact, fathered several children out of wedlock. Malcolm was deeply hurt by Muhammad’s actions, because he had previously considered him a living prophet. Malcolm also felt guilty about the masses he had led to join the NOI, which he now felt was a fraudulent organization built on too many lies to ignore.

Shortly after his shocking discovery, Malcolm received criticism for a comment he made regarding the assassination of President John F. Kennedy. “[Kennedy] never foresaw that the chickens would come home to roost so soon,” said Malcolm. After the statement, Elijah Muhammad “silenced” Malcolm for 90 days. Malcolm X, however, suspected he was silenced for another reason. In March 1964, Malcolm X terminated his relationship with the NOI. Unable to look past Muhammad’s deception, he decided to found his own religious organization, the Muslim Mosque, Inc.

That same year, he went on a pilgrimage to Mecca, which proved to be life altering for him. For the first time, Malcolm X shared his thoughts and beliefs with different cultures and found the response to be overwhelmingly positive. When he returned to the United States, Malcolm X said he had met “blonde-haired, blued-eyed men I could call my brothers,” which gave him new outlook on integration and a new hope for the future. This time when Malcolm X spoke, instead of just preaching to African-Americans, he had a message for all races.

After resigning from his position in the Nation of Islam and renouncing Elijah Muhammad, relations between the two had become increasingly volatile. FBI informants working undercover in the NOI warned officials that Malcolm X had been marked for assassination–one undercover officer had even been ordered to help plant a bomb in his car.

After repeated attempts on his life, Malcolm X rarely traveled anywhere without bodyguards. On February 14, 1965 the home where he, Betty, and their four daughters lived in East Elmhurst, New York was firebombed. Luckily, the family escaped physical injury.

One week later, however, his enemies were successful in their ruthless attempt. At a speaking engagement in the Manhattan’s Audubon Ballroom on February 21, 1965, three gunmen rushed him onstage. They shot him 15 times at close range. The 39-year-old was pronounced dead on arrival at New York’s Columbia Presbyterian Hospital. Malcolm X’s assassins, Talmadge Hayer, Norman 3X Butler, and Thomas 15X Johnson, were convicted of first-degree murder in March 1966. The three men were all members of the Nation of Islam.

Later that year, Betty gave birth to their twin daughters.