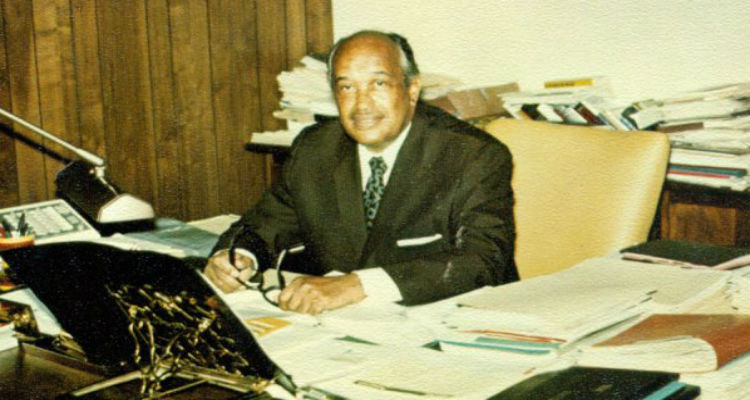 [dropcap size=small]H[/dropcap]erman Russell Branson (August 14, 1914 – June 7, 1995) was an African-American physicist and chemist, who was co-inventor of the alpha helix and perhaps deserved a share of the Nobel prize. Branson, who was also the president of two colleges helped to broaden the financing of Black colleges in the 1970’s and 1980’s.

Branson received a B.S. from Virginia State College in 1936. In 1939 he received his Ph.D. in Physics from the University of Cincinnati. He began his career in physics at Dillard University, then becoming a physicist at Howard University in 1941. He remained at Howard for 27 years, achieving increasingly important positions, eventually becoming head of the physics department, director of a program in experimental science and mathematics, and working on the Office of Naval Research and Atomic Energy Commission Projects in Physics at Howard University.

His research interests were in mathematical biology,  sickle cell anemia, and protein structure. He produced more than 100 research and other articles on physics, biophysics, Black American colleges, and science education. His most significant undertakings included co-discovery of the alpha helix.

While a research fellow at the California Institute of Technology in 1948 under the direction of the scientist Linus Pauling, Dr. Branson developed a mathematical analysis of alpha helix, the primary structure of protein. Although Dr. Branson co-wrote a paper on the discovery the following year, it was commonly referred to by 1968 as among the scientific achievements of Dr. Pauling.

Dr. Branson became president of Central State University in Wilberforce, Ohio, in 1968 and three years later became the 10th president of Lincoln University in Pennsylvania, the nation’s oldest Black liberal arts college. He helped to found the National Association for Equal Opportunity in Higher Education in 1969.

In 1970 he led a group of educators who visited the White House and told President Richard M. Nixon of the growing disparity in financing for higher education. Within six months the Nixon Administration had announced plans to raise Federal aid by some $30 million.