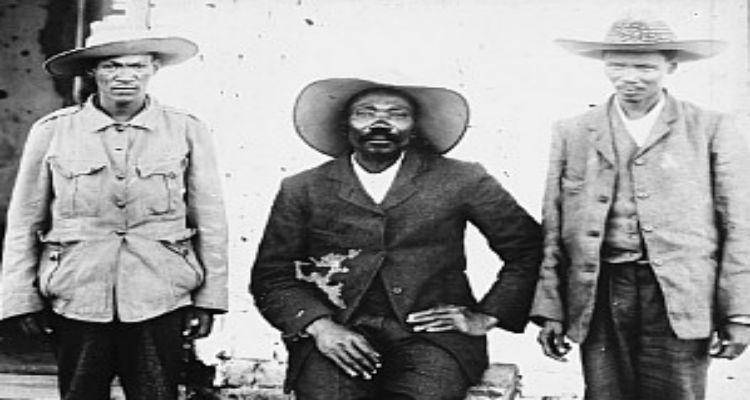 Jakob Marenga (also known as Jacob Morenga), is a national hero of Namibia. Marenga, which means King in Otjiherero, was an early resistance hero of Namibia. He fought over 50 battles against the Germans which took place between 1904 and 1908, earning a reputation within the German army as a strategic genius and a noble fighter. The Germans nicknamed him, “the Black Napoleon” (German: der schwarze Napoleon). Marenga is regarded as the first modern-day guerrilla fighter.

Marenga was born in 1875 to a Herero mother and Nama father. He was educated by Christian missionaries and worked as a mineworker in South Africa. Marenga is said to have been fluent in German, English and Afrikaans, which he learned from missionaries. Over the years there have been many stories about Marengo’s character. Nama-speaking people often refer to his love for humanity, and was also the first leader to allow women to speak at council meetings.

Before the Herero and Namaqua War of 1904–1907, Marenga had participated in smaller, more localized insurrections which were taking place across the South-West regions Africa that had been invaded by Germans. Through these, Marenga proved himself to be an able tactician. However, it was through his three years of leadership of the anti-German guerrilla forces that Marenga gained the majority of his reputation.

Marenga constantly strove to unite the different nations that German war strategies had kept apart. Although he was Herero descent he was accepted was by Nama-speaking people. At the height of the war, he had a following of more than 600 armed men drawn from both sides of the Orange River consisting of Nama and Herero peasants as well as of Xhosa-speaking and other workers from Namaqualand. Marenga was able to use the different fighting styles of the Herero and Namaqua to good effect. The Herero sought direct and open combat with German forces, while the Namaqua preferred more guerrilla-like tactics. The diverse methods of attack used by Marenga’s forces were enough to force a special election in the German Reichstag, due to the relatively heavy losses suffered by German troops. Marengo’s influence and firm opposition to German occupation was feared so much by the colonial forces that Kaiser Wilhelm II personally put 20 000 Mark bounty on his head.

After more than 50 battles against German troops, Marenga was captured and imprisoned by British forces. However, he was released a short time later under the condition that he never return to the German-invaded territories of South-West Africa again. Despite this, he again ventured into South-West Africa by crossing the Orange River. He soon began the task of assembling an army of native peoples to once again attack German troops. He gathered together the now-dispersed nations of the Herero, Namaqua, and Witboois, leading them into battle against the German occupation.

Marenga gained a reputation within the German army as a strategic genius and a noble fighter, earning him his nickname, “the Black Napoleon” (German: der schwarze Napoleon). In May 1906, after the climactic Battle of Rooysvlei, Morenga was again forced to leave South-West Africa, fleeing to South Africa. He retreated to the Kalahari desert, where he planned further insurrections against German troops. However, Marenga was traced through cooperation between German troops and British police, and was eventually shot and killed in a battle between his forces and the combined German-British forces, on September 20, 1907 at Eenzaamheid.

Marenga is honoured in form of a granite tombstone with his name engraved and his portrait plastered onto the slab. A statue of Morenga is situated at the cemetery of Warmbad in the far South of Namibia.

Jakob Marenga is one of nine national heroes of Namibia that were identified at the inauguration of the country’s Heroes’ Acre near Windhoek. Founding president Sam Nujoma remarked in his inauguration speech on 26 August 2002 that:

Born of a Herero mother and a Nama father, Marenga had a vision of broad African nationalism which transcended narrow ethnic loyalties and he was therefore designated as ‘the man of the future’. He employed scientific guerilla tactics with the multi-ethnic troops under his command and engaged the German colonial army in more than fifty battles. To his revolutionary spirit and his visionary memory we humbly offer our honor and respect.