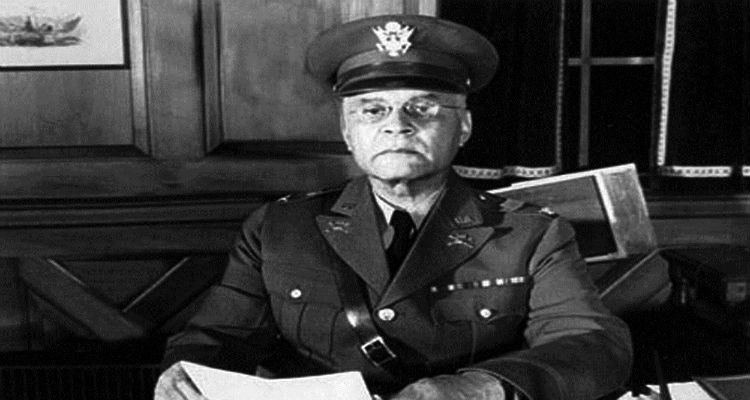 Benjamin Oliver Davis, Sr., was the first African-American general for the U.S. Army. His army career dated from the Spanish-American war to World War ll. Davis was a highly decorated soldier. He earned the French Croix de Guerre, a Bronze Star Medal and Distinguished Service Medal, and the Grade of Commander of the Order of the Star of Africa from Liberia.

Davis was born on July 1, 1877, in Washington, D.C. Little is known about his early life, but his family was comfortably middle-class. He graduated from Howard University in 1898 and entered the army after graduation as a volunteer when the Spanish-American War was officially declared on April 25, 1898. Davis was part of the 8th U.S. Volunteer Infantry (an-all black unit) as a First Lieutenant. In 1899 he enlisted as a private in the 9th U.S. Cavalry, a unit of the regular army, and soon rose to the highest rank held by any Black soldier at the time.

Determined to become an officer, he passed the examinations in 1901 and was promoted to second lieutenant. He was assigned to duty in the Philippine Islands, still with the 9th Cavalry, but was then reassigned to the 10th Cavalry and returned with that unit to the U.S. where he served as Adjutant at Fort Washakie, Wyoming. He was promoted to First Lieutenant in 1905, and in September of that year was appointed a Professor of Military Science and Tactics at Wilberforce University in Ohio, to teach military science. Davis remained there until 1909, after which he served as a military attaché in Liberia.

Davis returned to the U.S. after three years duty in Africa in 1912. He retuned to active duty in the Philippines in 1917, after an assignment in Mexico and a repeat tour of duty at Wilberforce. He was by this time a captain. After a teaching assignment at the Tuskegee Institute, during which he was promoted to the rank of lieutenant colonel (the first lieutenant colonel was Allen Allensworth: 1842-1914), he became an instructor to the Ohio National Guard in 1924.

Davis was given his own regiment to command, the 369th Cavalry New York National Guard in 1937. He held the rank of colonel at this time. In 1940, he was promoted to Brigadier General, becoming the first black soldier to hold the rank of General in the Army. In 1941 he reported for duty as a Brigade Commander with the 2nd Cavalry Division in Fort Riley, Kansas. Later that year, he was assigned duty as Assistant to the Inspector General in Washington, D.C. where he would continue to serve intermittently for the duration of his career.

Throughout his army career Davis was confronted by and fought against segregation and discrimination in the armed forces. He served as a mentor to troops during World War ll, and was noted as a diplomatic negotiator on racial problems and an advisor to then-General Dwight Eisenhower on integration in the army.

Davis was one of just six black officers in the regular army in the 86-year period from the Civil War to World War II. There is now approximately 10,000 due in part to his efforts to secure just treatment and rewards for black soldiers and despite a frustrating history of so-called “safe assignments” designed to keep him from command over white troops.

Davis retired in 1948 with 50 years of military service. That same year, President Harry S. Truman issued an order which forbade discriminatory practices in the armed forces, relying on the foundation built by Davis’ work. He was in hospital in North Chicago, Illinois, when he died of leukemia on November 26, 1970, and was buried in Arlington National Cemetery in Virginia.

His son, Benjamin O. Davis, Jr., followed in his father’s footsteps and grew up to become the first black general in the U.S. Air Force.