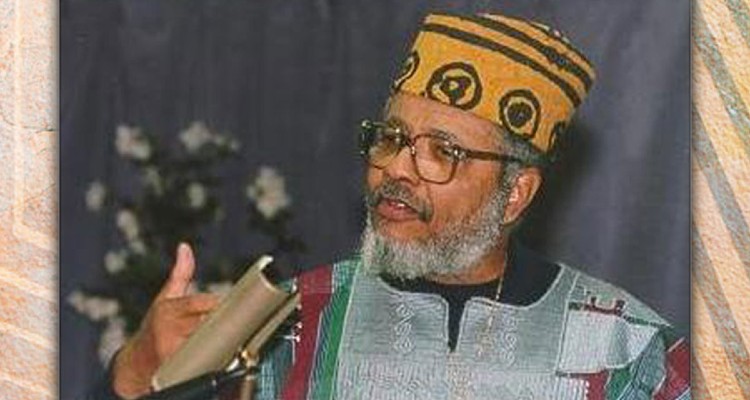 “We must restore the historical consciousness of the African people. The reawakened Africans would then create a new African reality and be a major factor in rescuing the world from the pessimistic prospects facing the world as a result of the flaws in the scientific worldview which now prevails and dominates the consciousness of the intellectual community…” ~Jacob H. Carruthers

Dr.  Jacob H. Carruthers (also known as Jedi Shemsu Jehewty) was an African-centered historian and educator, who was one of the world’s leading experts in classical African civilizations. Recognized among his peers, as an African deep thinker, Carruther played a leading role as a scholar and intellectual activist in the development of the African Centered Education Movement, for over thirty-five-years. Carruthers was a founder and President of the Association for the Study of Classical African Civilzations (ASCAC) and director of the Kemetic Institute. He authored Mdw Ntr: Divine Speech, The Irritated Genie: An Essay on the Haitian Revolution, and Intellectual Warfare.

Carruthers stated that African-Centered scholars were engaged in an “Intellectual Warfare” and were struggling against a well-financed and organized European intellectual army preparing to do battle to the end. “Therefore, a great deal of Dr. Carruthers’ writings and lectures concentrated on the [European] intellectual assault on African people and the world. Dr. Carruthers has been magnificent in exposing the European intellectual tyranny and its impact on the education of African people,” wrote Conrad Worrill. During the course of Carruthers’ intellectual warfare, he traveled throughout the continent of Africa, conducting study tours to Egypt, Ethiopia, the Nile Valley, Zimbabwe, Senegal, the Ivory Coast, and other parts of West Africa.

Carruthers was born on February 15, 1930 in Dallas, Texas. Following graduation from Phyllis Wheatley High School in Houston, he attended Samuel Huston College where he earned his bachelor’s degree in 1950. In 1951, facing the draft and the Korean War, he volunteered for the United States Air Force (USAF). After serving in the USAF, he enrolled in Texas Southern University, where he earned a master’s degree in government. From 1961 to 1964, he taught at Prairie View College in Texas. In 1966, he became the first African-American student to earn a doctorate in political science from the University of Colorado at Boulder. Carruthers taught at Kansas State College in Pittsburg, for two years, before going to Chicago.

For 32 years, Carruthers was a professor of History and Education at Northeastern Illinois University’s Center for Inner City Studies (CICS), now officially known as the Jacob H. Carruthers Center for Inner City Studies (CCICS). His leadership pioneered the development of both undergraduate and graduate degrees, which influenced the development of hundreds of students who sought careers working in the urban environment of the inner city.

In 1975, one year after Cheikh Anta Diop, the famous African scholar-scientist and his protégé and colleague Théophile Obenga successfully defended the African origin of ancient Kemet at the UNESCO symposium in Cairo, Carruthers visited Diop in Senegal. At this visit, Ifé Carruthers (his wife) writes:

“Diop impressed upon Dr. Carruthers the importance of the study of ancient Egypt and more importantly the need to center that study around the command of the Egyptian languages, commonly called hieroglyphics.”

Returning from this meeting Carruthers set about helping to establish the organizational base to centralize Kush and Kemet as the classical African civilizations upon which liberated African institutions would be built.

In 1978 Carruthers and the African-centered research team composed of A. Josef Ben Levi, Anderson Thompson and Conrad Worrill founded the Kemetic Institute. This organization was born to address the need for serious restoration-driven search by Africans on the Classical African civilizations of Kush and Kemet. Carruthers was the founding director of the Institute, who consistently clarified that the institution was to serve as the springboard for African-centered institution building by providing the knowledge-base from which other institutions could be nourished.

Carruthers also led a group of 1,000 teachers, students, artists and scholars from the United States to the Nubian Cultural Center in Aswan, Egypt for a two week conference and tour of Nubia and Egypt. In addition, he wrote or edited hundreds of essays and papers on his studies; lectured at various educational institutions; served on evaluation teams for many area high schools; and worked as a consultant to both the Dayton and Chicago public school systems. Carruthers authored several important books, with his most notable work being Intellectual Warfare.

Carruthers passed away on January 5, 2004 of pancreatic cancer in his Chicago home at age 73. He was survived by his wife, Ifé, and four children.

The white supremacy curriculum is entrenched in higher education throughout the European-controlled world.

If we accept the premise that the present-day education of our youth both deeducate and miseducate them, we then should examine carefully what is taught in the schools and strive carefully to supplement, augment, repudiate or reject those teaching that continue to drive black people mad. But most urgently, we really have no alternative but to Africanize the curriculum.”