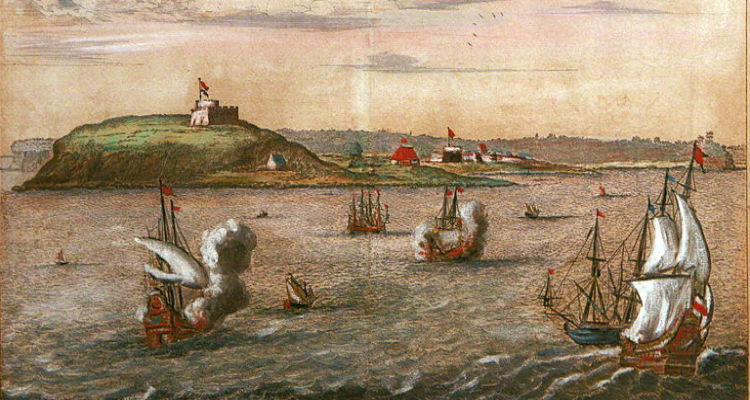 “The Island of Gorée is an exceptional testimony to one of the greatest tragedies in the history of human societies: the slave trade. The various elements of this “memory island” – fortresses, buildings, streets, squares, etc. – recount, each in its own way, the history of Gorée which, from the 15th to the 19th century, was the largest slave-trading centre of the African coast.” ~UNESCO

Gorée Island is a small 45-acre island located off the coast of Senegal, opposite Dakar. It is a small island, approximately 600 m x 250 m. Gorée was at the centre of the rivalry between European nations for control of the slave trade. Ruled in succession by the Portuguese, Dutch, English and French, it was a slaving warehouse. The House of Slaves (Maison des Esclaves) and its Door of No Return is now a museum and memorial to the Maafa (slavery).

The island of Gorée was one of the first places in Africa to be settled by Europeans, as the Portuguese settled on the island in 1444. The first record of slave trading there dates back to 1536 and was conducted by Portuguese. The Island was captured by the United Netherlands in 1588, then the Portuguese again, and again the Dutch. The Dutch named it after the Dutch island of Goeree, before the British took it over in 1664. After the French gained control in 1677, the island remained continuously French until 1960. The House of Slaves was built in 1776. Built by the Dutch, it is the last slave house still standing in Goree and now serves as a museum.

Before the mid-90s, it was estimated that about 20 million Africans passed through the Island between the mid-1500s and the mid-1800s.

“During the African slave trade, Goree Island was a slave-holding warehouse, an absolute center for the trade in African men, women and children. Millions of West Africans were taken against their will. These Africans were brought to Goree Island, sold into slavery, and held in the holding warehouse on the island until they were shipped across the Atlantic Ocean. They were sold in South America, the Caribbean, and North America to create a new world. The living conditions of the captive Africans were atrocious on Goree Island.

They were chained and shackled. As many as 30 men would sit in an 8-square-foot cell with only a small slit of window facing outward. Once a day, they were fed and allowed to attend to their needs, but still the house was overrun with disease. They were naked, except for a piece of cloth around their waists. They were put in a long narrow cell used for them to lie on the floor, one against the other. The children were separated from their mothers. Their mothers were across the courtyard, likely unable to hear their children cry. The rebellious Africans were locked up in an oppressive, small cubicle under the stairs; while seawater was sipped through the holes to step up dehydration

Above their heads, in the dealer’s apartments, balls and festivities were going on. But even more poignant and heart wrenching than the cells and the chains was the small “door of no return” through which every man, woman and child walked to the slave boat, catching a last glimpse of their homeland.”

However, since the mid-90s (following a controversial article written in 1996 in Le Monde), there has been heated academic debate around Gorée. The debates have largely been on the revisionist side, with most historians today arguing that the scale of the slave trade in Gorée was likely much lower than in many other parts of western Africa. Estimates of only 33,000 captives, are now being given.

Apart from captive African, beeswax, hides and grain were also traded. The population of the island fluctuated according to circumstances, from a few hundred free Africans and Creoles to about 1,500. There were also a few European residents at any one time. When the French abolished the Maafa in 1848, 6000 persons, 5000 of them former captives were living on the island.

The Island was designated by the United Nations Educational, Scientific Cultural Organization (UNESCO) to be a World Heritage Site, in 1944, with safeguarding measures in 1951. It was subsequently inscribed on the national heritage list in 1975 (Order No. 012771 of 17 November 1975) and on the World Heritage List in 1978.

The main Slaves’ House remains in tact with cells and shackles, the Historical Museum, the Maritime Museum, residential homes and forts are all standing too. The Island today has about 1000 residents.

The Island is now a Memory Island, considered as a memorial to the Black Diaspora and is a pilgrimage destination for the African diaspora.