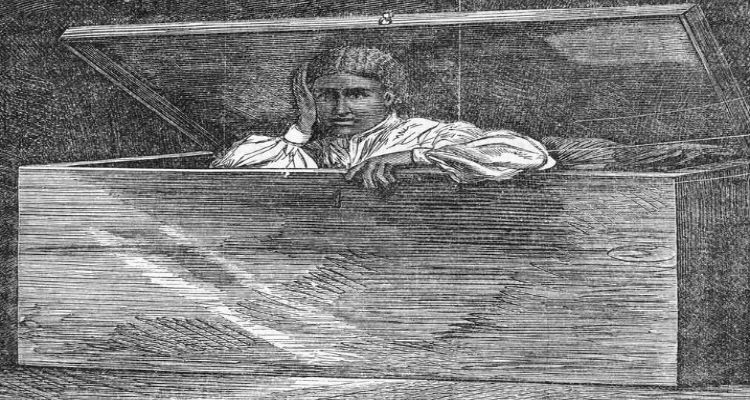 Lear Green was an enslaved African American young woman who escaped from Baltimore slaveholder James Noble by hiding in an old wooden sailor’s chest. The chest containing Green was delivered to Philadelphia — after a lengthy steamship voyage.

James Noble had “inherited” Lear Green from his mother-in-law. When she ran away, he posted an advertisement of her escape, which read as follows: “$150 REWARD. Ran away from the subscriber, on Sunday night, 27th inst., my NEGRO GIRL, Lear Green_about 18 years of age, black complexion, round featured, good looking and ordinary size… I have reason to be confident that she was persuaded by a negro man named Wm Adams…he had been heard to say he was going to marry the above girl.”

William Adams and Lear Green had indeed been in love. In fact, Adams had repeatedly propose to her, but Green had said she would never marry, as any children born to her would be enslaved. Green had looked into the expectant eyes of her would-be fiancé Adams and asked, “How can I perform the duties of wife and mother while burdened by the shackles of slavery?” Adams and Green’s mother agreed, taht the future Mrs Adams and mother of his children must escape.

Lear Green purchased an old sailor’s chest and in it stashed a “quilt, a pillow, and a few articles of raiment, with a small quantity of food and a bottle of water.” Her fiance and his mother fastened the chest with heavy rope and placed it among freight on an Ericcson steamer. Adam’s mother, being a free woman, came along as a passenger and was assigned to the deck, which put her near the sailor’s chest. There she watched over the chest containing her daughter-in-law-to-be, and once or twice during the night, she untied the ropes circling the chest and lifted the lid allowing Green a breath of fresh air. After 18 hours in the chest, the steamer reached Philadelphia and it was delivered to a home belonging to friends of Mrs. Adams on Barley Street.

After a brief stay in Philadelphia under the guardianship of William Still, Green moved to Elmira, New York, where she married William Adams as her former enslaver suspected, before her untimely death at age 21, three years later.