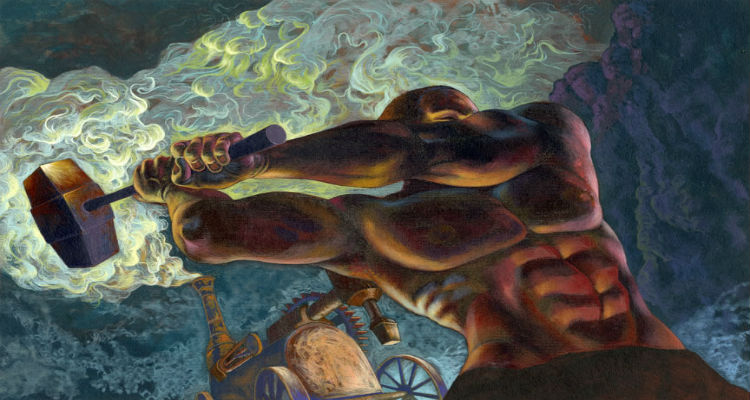 John Henry is an African American folk hero of extraordinary strength. John Henry was a “steel-driving man” who challenged a steam drill to prove the worth of human labour; he won, but his heart gave out from stress shortly after. No one knows for sure if John Henry existed.

The story of John Henry is told in a classic folk song, which exists in many versions, and has been the subject of numerous stories, plays, books and novels. Various locations, including Big Bend Tunnel in West Virginia, Lewis Tunnel in Virginia, and Coosa Mountain Tunnel in Alabama, have been suggested as the site of the contest. 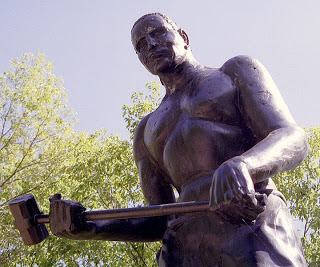 The legend states that John Henry was born enslaved in the 1840s or 1850s, in North Carolina or Virginia. He grew to stand 6 feet tall, 200 pounds and had an immense appetite, and an even greater capacity for work. He had a beautiful baritone voice, and was a favorite banjo player to all who knew him. John Henry was freed after the war, and he went to work rebuilding the Southern states whose territory had been ravaged by the Civil War.

John Henry was hired as a steel-driver for the C&O Railroad, a wealthy company that was extending its line from the Chesapeake Bay to the Ohio Valley.

Steel drivers, also known as a hammer man, would spend their workdays driving holes into rock by hitting thick steel drills or spikes. The hammer man always had a partner, known as a shaker or turner, who would crouch close to the hole and rotate the drill after each blow.

The C&O’s new line was moving along quickly, until Big Bend Mountain emerged to block its path. The mile-and-a-quarter-thick mountain was too vast to build around. So the men were told they had drive their drills through it, through its belly.

It took 1,000 men three years to finish. The work was treacherous. Visibility was negligible and the air inside the developing tunnel was thick with noxious black smoke and dust. Hundreds of men would lose their lives to Big Bend before it was over, their bodies piled into makeshift, sandy graves just steps outside the mountain. John Henry was one of them. As the story goes, John Henry was the strongest, fastest, most powerful man working on the rails. He used a 14-pound hammer to drill, some historians believe, 10 to 20 feet in a 12-hour day – the best of any man on the rails.

…He would spend his day’s drilling holes by hitting thick steel spikes into rocks with his faithful shaker crouching close to the hole, turning the drill after each mighty blow. There was no one who could match him, though many tried.

One day a salesman came along to the camp, boasting that his steam-powered machine could outdrill any man. A contest was set up then and there between John Henry and the drill. John Henry won the race but paid the ultimate price. The legend says, he drove fourteen feet to the drill’s nine. He died shortly after, some say from exhaustion, some say from that a blood vessel had burst in his brain. The greatest driller in the C&O Railroad was dead.

Many believe John Henry’s famous contest took place between 1869 and 1871 at the Big Bend Tunnel near Talcott, West Virginia. It is said that John Henry’s likeness is carved right into the rock inside the Big Bend Tunnel, and if you walk to the edge of the blackness of the tunnel, sometimes you can hear the sound of two 20-pound hammers drilling their way to victory over the machine.

However, it also claimed that the contest took place 40 miles away, at the Lewis Tunnel, between Talcott and Millboro, Virginia. Or took place on September 29, 1887, at the Coosa Mountain or Oak Mountain Tunnel.

Though the story of John Henry sounds like the quintessential tall tale, it is certainly based, at least in part, on historical circumstance. There are disputes as to where the legend originates. Some place John Henry in West Virginia, while recent research suggests Alabama. Still, all share a similar back-story.

The story of John Henry is traditionally told through two types of songs: ballads, commonly referred to as “The Ballad of John Henry”, and work songs known as hammer songs. The latter were slow, pace-setting tunes sung by laborers, which used John Henry’s death to inspire others in similar situations to survive. In 1905, folk-song collector E.C. Perrow heard mountain-dwelling whyte steel drivers singing the following lines:

The ballads about John Henry’s life typically contain four major components: a premonition by John Henry as a child that steel-driving would lead to his death, the lead-up to and the results of the race against the steam hammer, Henry’s death and burial, and the reaction of John Henry’s wife.

Next, there’s the lead-up to the race. Sometimes, we get details about how the challenge came about, as well as the type of hammer — or hammers — Henry intends to use. Third, there’s a recap of the contest itself, in which we learn how long our hero wailed away before his heart gave out.

Lastly, there’s the presence of a woman — a faithful wife:

There is some controversy among scholars over which came first, the ballad or the hammer songs. Some scholars have suggested that the “John Henry” ballad grew out of the hammer songs, while others believe that the two were always entirely separate.

Whether he was real, the John Henry in the song is most certainly a Black man. His tale has been used as a symbol in many cultural movements, including labor movements and the Civil Rights Movement.

“John Henry is a symbol of physical strength and endurance, of exploited labor, of the dignity of a human being against the degradations of the machine age, and of racial pride and solidarity. During World War II his image was used in U.S. government propaganda as a symbol of social tolerance and diversityivil Rights era.”

In 1996, the U.S. Post Office issued a John Henry 32-cent postage stamp. It was part of a set honoring American folk heroes.