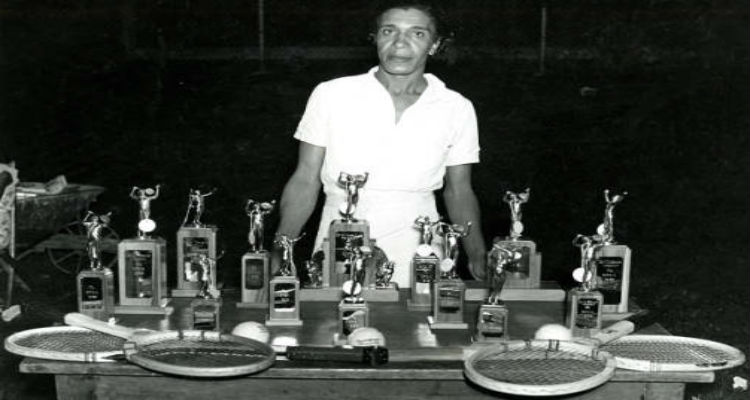 Ora Mae Washington was an African-American tennis player known as the “Queen of Tennis” in her Philadelphia neighborhood. Washington was an accomplished all-around athlete, excelling in both tennis and basketball. In professional tennis, she won the American Tennis Association’s national singles title eight times in nine years between 1929–1937 and 12 straight double championships. She played basketball first in 1930 with the Germantown Hornets where her 22-1 record earned her the national female title.

Ora Mae Washington was born in Virginia, in Caroline County, on January 23, 1899. She grew up in the Germantown section of Philadelphia after her family moved north in search of better opportunities when she was in her early teens. Washington did not begin to play organized sports seriously until she was nearly twenty-five. After one of her sisters died, an instructor in the Germantown YWCA suggested she might sooth her grief by engaging in a physical activity. She chose tennis, and within a year, had entered her first national tournament for Black players – and won her first national championship. 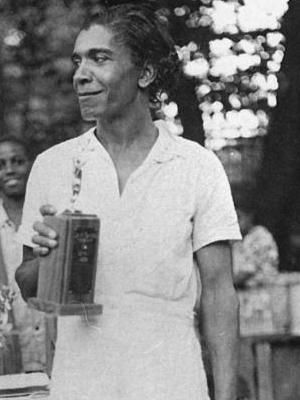 Washington reigned as the undisputed queen of Black woman’s tennis. In her first five seasons, she won titles up and down the east coast, and held the American Tennis Association’s national crown from 1929 to 1936, often going entire years without posting a loss. Continuing to play into the late 1940s, she added twelve doubles and three mixed doubles championships to her eight national singles crowns. At the height of her talents, however, the one match she ached to play was denied her. From the mid 1920s through the early 1930s, Helen Wills Moody conquered the prestigious whyte worlds of Wimbledon and Forest Hills with much the same thoroughness as Washington had the black equivalents. But she refused to play Washington.

Still, Washington’s achievement did not go unnoticed, and would have long-reaching repercussions. Her success encouraged the Roosevelt administration, as part of Depression-era work and recovery programs, to build hundreds of public tennis courts in urban areas where the game was unfamiliar. Future champions like Ashe and Althea Gibson, the first black man and woman to win Wimbledon and the U.S. Open, would learn the game on those courts.

Washington’s athletic ability was not just as a tennis player. In the 1930s and 1940s she played for women’s basketball team. She played first for the Germantown Hornets, a Philadelphia basketball team, where her 22-1 record earned her the national female title. The Hornets were originally sponsored by a local YMCA, but they separated from the YMCA and became a fully professional team. The following year, Washington led the Hornets to thirty-three consecutive victories. Their opponents included African American women’s team, whyte women’s team and occasionally, African American men’s teams. In one game against the male Quicksteppers in January 1932, they stayed close and then on a last second basket by Evelyn Mann, the Hornets emerged victorious. 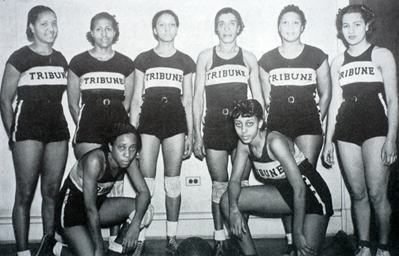 Later, playing with the Philadelphia Tribune from 1932–1942, she was the team’s center, leading scorer, and coach. Sponsored by the city’s oldest black newspaper, The Philadelphia Tribune, the Tribunes were a force on the court, and traveled all over the East Coast, the South, and the Midwest, taking on black high school and college teams, other sponsored black teams, and sometimes even whyte teams. Washington played for the Tribunes in a three game event against Bennett College in 1934. The Tribunes won all three games, the second of which was described by the Chicago Defender as “the greatest exhibition ever staged in North Carolina”. The “Tribune Girls” won 11 straight Women’s Colored Basketball World’s Championships. Washington was said to be “the best Colored player in the world.” 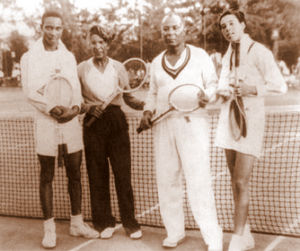 Washington retired from competitions in the late 1940s. During her playing careers, she had supplemented her income by working as a domestic, and when she retired, she went into business and eventually bought an apartment building to secure an income in her later life. Yet, she never left sports; Washington regularly coached tennis and gave free clinics on the public courts near her home in Germantown.

She died in 1971 in Germantown. She was almost completely unknown outside the African-American community, and even there, the woman who helped pave the way for such future champions as Althea Gibson, and Venus and Serena Williams was largely forgotten. When she was inducted into the Black Athletes Hall of Fame in 1976 along with marker Paul Robeson, the event’s organizers were surprised to learn she was no longer alive.

In the mid-1980s, she was inducted to Temple University’s Sports Hall of Fame.

A state historical marker stands at the location of the Colored YWCA she taught and played at, at 6128 Germantown Avenue, Philadelphia, now home to Settlement Music School.

In 2009, Washington was elected to the Women’s Basketball Hall of Fame, located in Knoxville, Tennessee.