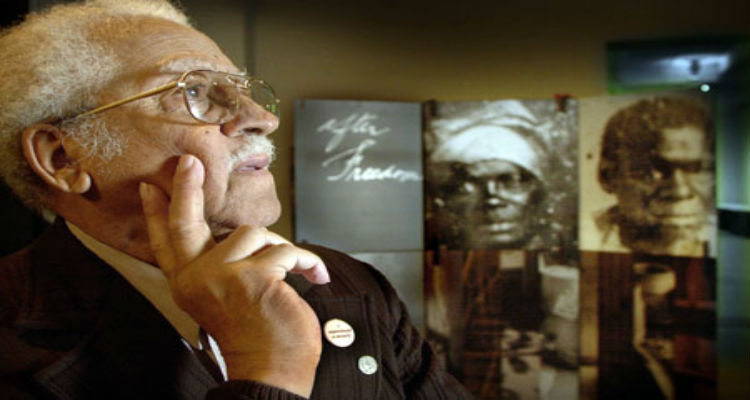 [dropcap size=small]J[/dropcap]ames Cameron survived being lynched from a maple tree in Marion, Indiana, when he was sixteen years old. Cameron, who kept a piece of the rope that had scarred his neck moments before he was spared, was the only known survivor of a lynching attempt. He detailed his experience in his well written memoir, A Time of Terror: A Survivor’s Story, now in its 3rd edition. In the 1940s, he founded three chapters of the National Association for the Advancement of Colored People (NAACP). He also served as Indiana’s State Director of the Office of Civil Liberties from 1942 to 1950. In 1988 Cameron founded America’s Black Holocaust Museum in Milwaukee, devoted to African-American history from slavery to the present.

James Herbert Cameron, Jr. was born on February 25, 1914, in La Crosse, Wisconsin, to James Herbert Cameron and Vera Carter. His father was a barber, who abused alcohol and therefore often lost his job. The family moved frequently as his father searched for employment. First they moved to Indianapolis, then through a series of small towns in Central Indiana, before finally settling in Birmingham, Alabama, when Cameron was five. By the time he was seven, his parents had divorced. When he was about fourteen, his mother moved the family to the North Central Indiana town of Marion to be near relatives. Cameron describes his mother as a very loving, religious woman, who worked as a laundress to support him and his two sisters.

On Aug. 7, 1930, 16-year-old Cameron and two older teenage friends, Thomas Shipp and Abram Smith were arrested and accused of murder, robbery and rape. A whyte couple was parked in a lovers lane when the trio came upon them and one of the teenagers suggested robbing the couple. Cameron later said he changed his mind and ran away before the man, Claude Deeter, 23, was fatally shot. The woman later denied being raped. The three were caught quickly and arrested and charged the same night.

A lynch mob broke into the jail where Cameron and his two friends were being held. According to Cameron’s own account, the two older boys were taken out first, beaten and lynched by a mob of 12,000-15,000 at the Grant County Courthouse Square. Shipp was taken out and beaten, hanged from the bars of his jail window; Smith was dead from beating before the mob hanged both the boys from a tree in the square. The bodies of these two men, Tom Shipp, 18, and Abraham Smith, 19, hanging from a tree is depicted in a famous and disturbing photograph. 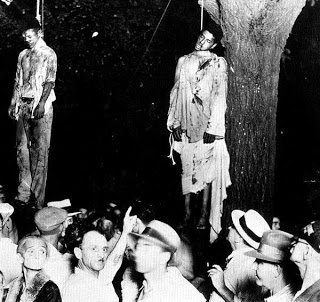 Cameron was beaten and a noose was put around his neck; but, miraculously he was saved. The voice of an unidentified woman intervened, saying that he was not guilty: “Take this boy back. He had nothing to do with any raping or shooting of anybody.” Cameron, with his neck scarred from the rope, was returned to the jail. He was tried and convicted as an accessory to the murder that incited the lynching. He spent five years in prison.

After he was paroled, Cameron moved to Detroit, Michigan, to live with an aunt. In Detroit, he attended Wayne State University and got married before moving in 1939 to Anderson, Indiana. There he owned the only Black business in town — a combination shoeshine parlor, record shop and knickknack store. At the same time, he continued to study lynchings, race and civil rights in America and trying to teach others. Because of his personal experience, Cameron dedicated his life to promoting civil rights, racial unity and equality. In the 1940s, he founded three chapters of the National Association for the Advancement of Colored People (NAACP), becoming the first president of the NAACP Madison County chapter in Anderson, Indiana.

He also served as the Indiana State Director of Civil Liberties from 1942 to 1950. In this capacity, Cameron reported to Governor of Indiana on violations of the “equal accommodations” laws designed to end segregation. During his eight-year tenure, Cameron investigated more than 25 incidents of civil rights infractions. He faced violence and death threats because of his work.

In the early 1950s, Cameron decided to leave Indiana and go to Canada, but when he stopped off in Milwaukee, several job opportunities caught his attention, and he stayed. Cameron worked in a brewery for a few years and at Milprint packaging company awhile. He also went to a trade school to become a boiler engineer. He worked at one of the biggest malls in Milwaukee, Mayfair Shopping Center, until age 65. He also owned a rug-cleaning business, which afforded him the chance to travel. Cameron still continued his work in civil rights by assisting in protests to end segregated housing in the city. He participated in both marches on Washington in the 1960s, the first with Martin Luther King, Jr., and the second with King’s widow Coretta and Jesse Jackson.

Cameron became a brilliant, well-read, self-taught historian and lecturer on the African-American experience. He gave many interviews on national television, including on Larry King Live, the Oprah Winfrey Show, and the 700 Club. The BBC (British Broadcasting Corporation), a Dutch film company, and several public television stations featured him in documentary movies made about the lynching. From 1955 to 1989 he published hundreds of articles and booklets detailing civil rights and occurrences of racial injustices, including “What is Equality in American Life?”; “The Lingering Problem of Reconstruction in American Life: Black Suffrage”; and “The Second Civil Rights Bill”.

After being inspired by a visit with his wife to the Yad Vashem memorial in Israel, Cameron founded America’s Black Holocaust Museum in 1988. He used material from his collections to document the struggles of African Americans in the United States, from slavery through lynchings, and the 20th-century civil rights movement. The museum, which started as a grassroots effort became one of the largest African-American museums in the country. In 2008, the museum closed because of financial problems. It reopened on Cameron’s birthday, February 25, 2012, as a virtual museum.

During the years he was in prison, Cameron began writing a memoir — the story of his life up to the age of twenty-one, which examined lynching as a tragic feature of American history and culture. Witnessing violence was a theme that runs through young Cameron’s life growing up. He and his sister watched a murderous, bloody knife and gun battle that felled a neighbor woman. Cameron was also forced by a whyte man to watch the public hanging of a Black man. For fifty years he searched in vain for a publisher courageous enough to publish his story.

Cameron finally mortgaged his home in 1982 to self-publish and distribute A Time of Terror. In his autobiography, Cameron recalled the raw, inhuman sound of the mob, which included members of the local Ku Klux Klan. He once said he still could remember the faces of the 2,000 whyte people who gathered there, some with their children. Some eating. He prayed for his life. He sold the 4000-copy run of the book out of the trunk of his car and at speaking engagements in schools and universities around the Midwest. Finally, in 1994, Black Classic Press republished the book as A Time of Terror: A Survivor’s Story. Twelve-thousand of the 15,000-copy run sold out in the first year.

In 2005, Cameron was an honored guest of the US Senate, when, eighty Senators passed a resolution apologizing for never outlawing lynching. But, of all the recognitions he had received in his lifetime, the most meaningful was his official pardon from the Indiana Governor and Indiana Parole Board. “When (the Parole Board Chairman) told me that,’ said Cameron, ‘I broke down and cried over the telephone. I’d been carrying that load all these years and didn’t know it was on me until it was lifted.”

James Cameron died on June 11, 2006, at the age of 92, from congestive heart failure. He is buried at Holy Cross Cemetery in Milwaukee. Two sons, David and James, had died before him. He was survived by his wife Virginia and three children: Virgil, Walter, and Dolores Cameron, five grandchildren, six great grandchildren, and two great-great-grandchildren.

Thank you. This was very educational. I was not aware.