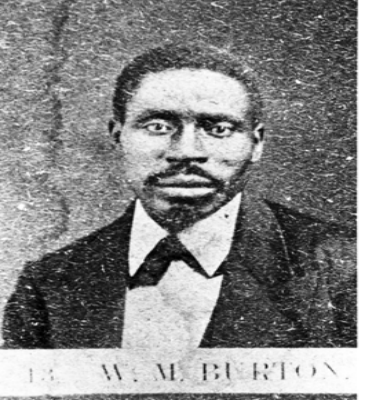 Walter Moses Burton holds the distinction of being the first Black elected sheriff in the United States. Burton was also a State Senator in Texas.

Along with these duties, he also served as the president of the Fort Bend County Union League. Union Leagues were formed throughout to mobilize black votes for Republican candidates, to fight against violence towards Black citizens and campaign against re-establishing voting privileges for former Confederates. At this time, Black citizens outnumbered white citizens in Fort Bend County and so carried great weight in elections. The great numbers of Black citizens carried African-American freedmen into office in addition to white politicians who worked with the African-American power base.

Burton is best known for opposing county convict labor and helping to found Prairie View A&M University. In the Senate he championed the education of African Americans, and among the many bills that he helped push through was one that called for the establishment of Prairie View Normal School (now Prairie View A&M University). Burton also served the Republican Party as a member of the State Executive Committee at the state convention of 1873, as vice president of the 1878 and 1880 conventions, and as a member of the Committee on Platform and Resolutions at the 1892 state convention.

Burton left the Senate in 1882 and was given an ebony cane with a gold handle by his colleagues. He remained active in state and local politics until he died in 1913. He and his son Horace are buried in Morton Cemetery in Richmond. At the time, they were the only African-Americans laid to rest in Morton Cemetery, which had previously been a whites-only cemetery.