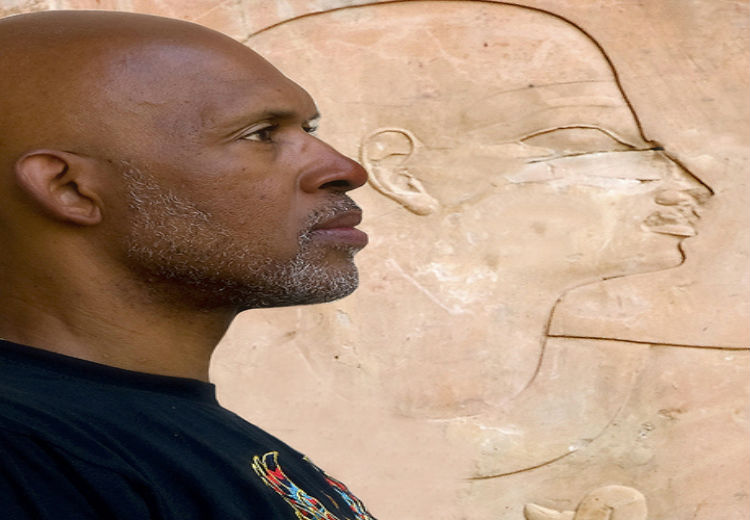 1. “When African people ruled the earth, thousands of years ago, black skin was a badge of honor. The color black was associated with God and various aspects of divinity. Ausar (Osiris) the resurrected God/king of ancient Kemet was referred to as “Lord of the Perfect Black,” and the black soil from which he was resurrected was considered sacred. Even the ancient Greeks considered blackness divine. The word melanin is derived from the Greek word “melons” which means black. Melons is derived from the words, “El” meaning black and “Ann” which is derived from a similar word “amine” which refers to Amon or Amen, the ancient word for God. Yes, there was a time, thousands of years ago, when black was not only beautiful, but it was considered divine by all people who possessed within their skin, the black presence of God.”

2. “The hostility that we exhibit toward each other stems from years of miseducation and unresolved personal conflicts. Because of our limited access to and appreciation of African history and culture, we currently function at varying levels of awareness and personal development. We Africans have been socially engineered to reject our past, and far too many of us live in a state of suspended animation. We deny the historical realities confronting us daily.”

3. “I have found that no matter where on the globe African people live, we are all subjected to the same oppressive forces of racism and white supremacy… Racism and white supremacy were also responsible for creating and sustaining the conditions which led to the enslavement, death, and disenfranchisement of millions of Africans and their descendants.”

5. “The liberation of the African Mind, Body, and Spirit can only be achieved through the use of an African centered value system that makes the study of the successes and failures of the past the highest priority.”

6. “Racism and whyte supremacy are synonymous and must never be confused with acts of prejudice-they are as different as night and day. All people have prejudices; this may be considered to be one of humankind’s great failings. However for a group to be legitimately classified as racist, it must possess the power to impose its prejudices on members of other ethnic groups. Power transforms a “pre-judged belief” into an ideology that is popularized, legitimized, and finally, incorporated into the legislative, judicial, religious, and social system designed to control the powerless.”

7. “We must be mindful of the fact that every image we see on television or film, every publication that we read, and every sound we hear on CD, radio and media has been carefully crafted by specialists and is designed to elicit a specific response from the audience. Black people must be particularly aware of the negative images of us that have been manufactured in the media over the years. Such media manipulation continues today. In reality, television, film, and radio are powerful electronic forces that saturate the mind and body with sights and sounds that influence psychological, emotional, and spiritual well-being. Its effects can be controlled by acknowledging its existence and learning to neutralize the negative influences it projects.”

8. “We must never forget that our ancestors were compelled by the letter of the law and the force of the whip to accept the ideas, beliefs imposed on them by their enslavers. They were forbidden from expressing their own thoughts and perceptions of the world and were forced to accept the beliefs and behaviors deemed appropriate for them.”

9. “Because of the painful and unresolved memories of our past many Blacks who continue to encourage their sisters and brothers to remember the struggles of their ancestors are frequently told by others to “get over slavery and forget the past.” We must be ever mindful that there has never been a culture that achieved greatness by separating itself from its past. No sane people willingly turn their backs on their past. It is only by facing your past that you can accurately perceive reality and determine your destiny.”

10. “Somewhere in the annals of European literature someone once wrote that “ignorance is bliss;” but in the ancient record of African philosophy is the belief that “ignorance is sinful.” Most of us have been conditioned to live our lives in a sinful state of blissful ignorance while thinking we were actually being saved. If we equate ignorance with sinfulness we would be more inclined to conduct independent research into the origins of our current beliefs and practices.”

Source:
The quotes were taken from Anthony T. Browder’s book, Survival Strategies for Africans in America.