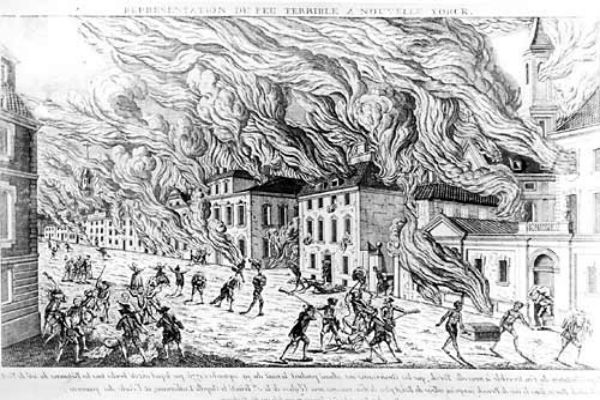 In the early 1700s, New York had one of the largest enslaved populations of any of England’s stolen territories. One out of every five New York residents was enslaved. The Maafa (Atlantic slavery) in New York differed from some of the other territories because there were no large plantations. Many enslaved Africans were skilled workers, carpenters, stone masons, fishermen, and boat builders. These bondspeople lived and worked next to free and indentured whytes and some intermarried when they got their freedom.

No one knows for certain what caused the uprising that happened the night of April 6, 1712, when about twenty-five to fifty enslaved African-Americans congregated at midnight in New York City, New York, with guns, swords and knives in hand. It was a large well-planned uprising. The bondspeople first set fire to an outhouse then fired shots at several Europeans, who had raced to the scene to fight the fire. By the end of the night, nine Euro-Americans were killed and six were injured.

The following day the governor of New York brought in the New York and Westchester militias. With the exception of six insurgents who committed suicide before they were apprehended, all of the insurgents were captured. Seventy bondspeople and free Blacks were jailed and 43 were put on trial. 18 were acquitted and 25 convicted, resulting in 20 being hanged and 3 burned at the stake.

After the uprising, laws governing the lives of African-Americans in New York were made more restrictive. The New York Assembly passed “an act for preventing, suppressing and punishing the conspiracy and insurrection of [Blacks] and other [bondspeople].” These Maafa codes stated that African Americans were not permitted to gather in groups of more than three, they were not permitted to carry firearms, and gambling was outlawed. Other crimes, such as property damage, rape, and conspiracy to kill, were made punishable by death. Enslavers were permitted to punish bondspeople at their full discretion, “not extending to life or member.” Any enslaver who decided to offer freedom were required to pay a tax of £200, a price much higher than the price of a bondsperson. In addition, free African-Americans were no longer allowed to own land.

Despite these stringent laws, New York would escape a Maafa uprising for only twenty-nine years.

Nb: The term Maafa is a Kiswhali word meaning “disaster.” It was coined by Marimba Ani to the describe the Trans-Saharan and Atlantic enslavement system and colonization. The term bondsperson is used instead of slave to describe African men and women who were caught up in the Atlantic system. Research has informed us that African men and women during this period from 1441 to 1888 were never “slaves” for what they experienced went beyond what was known as slavery. The African American scholar Hunter Adams named the Maafa experience as Humanicide, as European enslavers’ attempted to destroy African people’s humanity.

Read more details of this revolt which were provided by Robert Hunter, who was the governor of New York and New Jersey from 1710 to 1719, in a letter to the Lords of Trade in London written three months after the insurrection, on page 2 below:

Thank you for writing such an informative article on this important event. Is the image shown by the title a depiction of the 1712 revolt?

I’m asking because I’d like to use the image in reference to an illustration I’m doing on the 1712 revolt. Thank you again for your time, Kentake.

Thank you. This is an image from the public domain. Unfortunately, although I believe it is a newspaper illustration of the event, I am unable to find/remember where I source the image from.

Thank you for responding. I’ll let you know if I uncover anything about it.