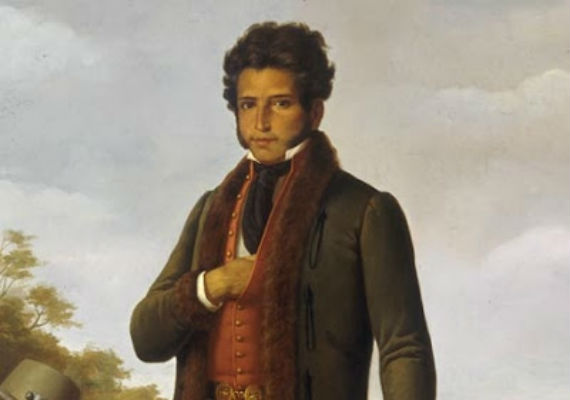 Vicente Ramón Guerrero Saldaña ( August 10, 1782 – February 14, 1831), the Mexican national hero was the first Black president in North America, when he became the second president of the Republic of Mexico on April 1, 1829. Guerrero was one of the leading revolutionary generals of the Mexican War of Independence. The state of Guerrero is named in his honour.

Guerrero was born in 1783 in a town near Acapulco called Tixtla, which is now located in the state that bears his name. Guerrero was of mixed African, Spanish and Native American ancestry. His father, Juan Pedro, was an African Mexican and his mother, Guadalupe Saldaña, an Indian. His family was devout supporters of Spanish rule, but when the revolution broke out, Guerrero joined the fight for Mexico’s independence from Spain in 1810, under the leadership of another Black man, General José María Morelos y Pavon, a Catholic priest who played the dominant leadership role in the war until he was killed in combat in 1815. Morelos, like Guerrero, is one of Mexico’s greatest heroes. Within two years, of joining the revolution Guerreor became general of the rebels, until Mexico was granted its independence in 1821. Between 1810 and 1821, Guerrero won a total of 491 battles, using guerrilla tactics against the Spanish army.

One of the most popular stories that took place during Guerrero’s 11 years of fighting happened in 1819, when his aging father begged him to go to the viceroy of New Spain and offer his sword in surrender. Guerrero replied to this request before his men with these words: “Compañeros, this old man is my father. He has come to offer me rewards in the name of the Spaniards. I have always respected my father but my Motherland comes first.”

Today, the line, “My Motherland comes first,” is the motto for the southern state of Guerrero. It is the only state named after a former Mexican head of state, and it is the location of the Costa Chica, the traditional home of the Afro-Mexican community in Mexico.

Guadelupe Victoria was elected the first President of Mexico, and in 1828, Guerrero ran for president against Manuel Gómez Pedraza, who won. Claiming foul play, Guerrero and his supporters rebelled, toppled the new government, and Guerrero became president on April 1, 1829.  During his brief term as President, Guerrero made sweeping changes to help the working classes and the rights of indigenous peoples. Several policies he instigated including taxes for the rich, protection for small businesses, abolition of the death penalty, and advocacy for villages to elect their own councils of representatives. He was a strong advocate for social equality and signed his correspondence as “Citizen Guerrero.”

Most significantly, on September 16, 1829, Mexico’s Independence Day, Guerrero abolished slavery throughout the country, forty years before Abraham Lincoln  would do the same.  That declaration, unfortunately, was the action that led to his downfall. Texas, which was part of Mexico’s territory at the time, threatened revolt, backed by its class of Euro-American enslavers. Three months after abolishing slavery, he was driven out of office. Two years later, Guerrero joined the rebel forces fighting against the new government. Betrayed by one of his friends, Guerrero was kidnapped and taken into custody in Oaxaca for trial. He was executed on February 14th, 1831.

The Prince of Pan-Africanism: An Interview with Dr. Umar Johnson