John Armstrong Howard was the first Black Olympic athlete from Canada, competing in the 1912 Summer Olympics. The Winnipeg-raised First World War veteran dominated Canadian sprinting from 1912 to 1915. Howard is the grandfather of Olympic sprinters Harry Jerome and Valerie Jerome. 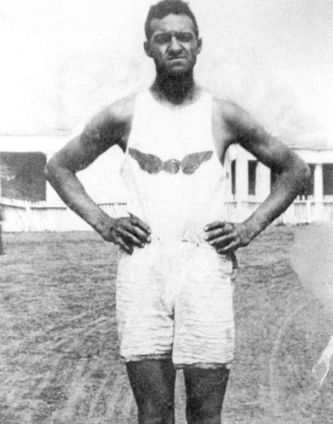 Howard was born on October 6, 1888, in Winnipeg, Manitoba. Trained as a mechanic, he eventually made his mark on the Canadian scene as a sprinter. Howard easily qualified for the 1912 Olympics held in Sweden, and was cited by major Canadian media as Canada’s best gold medal hope. However, the path to Stockholm was not smooth. During training for the Olympics, he ran into conflicts with chief coach Walter Knox; according to the Manitoba Free Press of June 27, 1912, Knox accused Howard of insubordination, and, in an era when discrimination against Black athletes was common, threatened to expel him from the team. However, the efforts of the Amateur Athletic Union of Canada kept Howard on the team. In addition, Howard was barred from staying at the same hotel as the whyte athletes, and when traveling by boat to Sweden, he was not allowed to eat in the dining room with his whyte teammates.

In the Olympics in Stockholm, Howard was hindered by a stomach ailment and stress resulting from the discord with Coach Knox and was eliminated in the semi-finals of the 100 meters competition as well as of the 200 meters event. He was also a member of the Canadian relay teams which were eliminated in the semi-final of the 4×100 meter relay competition and in the first round of the 4×400 meter relay event.
Ironically, all three medal winners of his events had been beaten by Howard at track meets just prior to the 1912 Olympics.

Howard came back in full force at the Canadian Outdoor Championships in 1913, winning all of his races. He also showed his athletic abilities as a catcher for the Crescent Creamery Baseball Club in Winnipeg.

Howard’s athletic career was cut short by the outbreak of the First World War in 1914. He was conscripted into the Canadian Expeditionary Force and began his military service on April 12, 1918, as a private with 1st Depot Battalion, Manitoba Regiment. He served in England, first as a sapper (the Canadian Military Engineers term for those of private rank) with the Canadian Railway Troops, a railway construction unit.

He later transferred to the 11th and 18th Canadian Reserve Battalions, which provided reinforcements for infantry battalions on the continent. Howard ended his deployment with the Canadian Army Medical Corps, most likely serving as a stretcher-bearer moving convalescent patients.

In 1920, Howard returned to Canada with his English fiancée Edith Lipscomb and a baby girl who was the first of their three daughters. Married in Winnipeg, the inter-racial couple soon encountered severe prejudice. The couple were stoned and driven out of town when they tried to homestead at Ste. Rose du Lac, north of Winnipeg. They finally settled near the Crane River Indian Reserve in Manitoba, though the marriage eventually broke up.

The First World War veteran worked as a railway porter and taught boxing until he died of pneumonia in 1937 at the young age of 48.

Howard never got the public acclaim in his lifetime that his accomplishments deserved, but his legacy lives on. He was inducted into the Manitoba Sports Hall of Fame in 2004, and two of his grandchildren, sprinters Harry and Valerie Jerome, were also Olympic competitors.