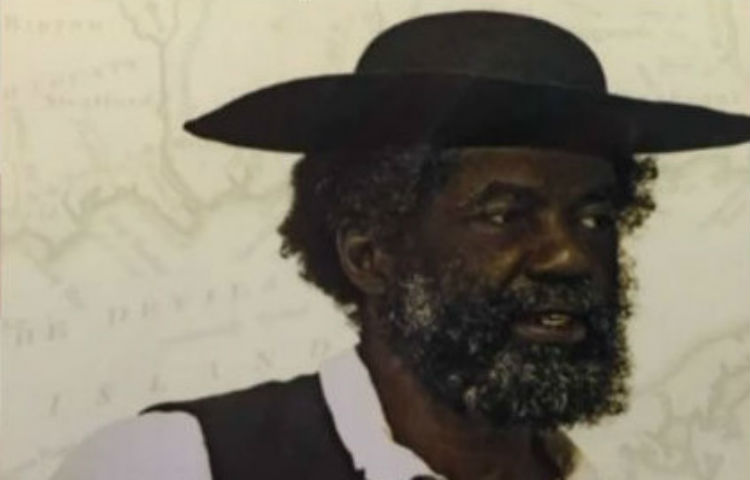 Venture Smith, was the son of a royal family, who was kidnapped from his homeland in Africa as a boy and sold into the Maafa (slavery). Venture became a figure of mythical proportions in New England, where he was known for his great size and strength. His physique and unwillingness to suffer insult made him a problem for his enslavers, and he was sold several times before he was able to purchase his freedom in 1765, at the age of thirty-six. His history was documented when he recorded a narrative of his life and published it under the title A Narrative of the Life and Adventures of Venture, a Native of Africa: But Resident above Sixty Years in the United States of America, Related by Himself.

Venture Smith was born Broteer Furro in a place he recalls as Dukandarra in a region of West Africa. According to his narrative, his father, a prince, exercised authority with honor and generosity. His mother was one of several wives. Venture wrote that “I was descended from a very large, tall and stout race of beings, much larger than the generality of people in other parts of the globe.” Legend has it that Venture was well over 6 feet 1 1⁄2 inches (1.87 m) tall, weighed 300 pounds (140 kg), and carried a 9-pound (4.1 kg) axe for felling trees. His family’s world was turned upside down when a marauding army threatened, betrayed, and ultimately overwhelmed his people. Venture witnessed the torturing and murder of his father by the army for refusing to disclose the location of his treasure. As a 10-year-old, he was taken captive and marched about 1,000 miles to the coastal slave-trading center Anomabo (in present-day Ghana).

Venture was sold to Robinson Mumford, an officer on a Rhode Island slaver commanded by a “Captain Collingwood” who purchased him for “four gallons of rum and piece of calico cloth.” The vessel was probably the Charming Susannah, which departed Newport in late 1738 and returned in September 1739. Venture survived the smallpox epidemic that ravaged the ship during the Middle Passage, and while most of the surviving captives were sold in Barbados, he was brought to New England. Mumford decided to call him Venture because he considered purchasing him to be a business venture. Mumford rented Fisher’s Island from members of the Winthrop family and operated the 3,000-acre property as a large, commercial farm, raising mostly sheep and dairy cows. At Mumford’s residence Venture worked in the household but as he grew older, he endured harder tasks and more severe punishments.

At the age of twenty-five, Venture married an enslaved woman named Meg (Margret). Shortly thereafter, on March 27, 1754, he made an escape attempt, convinced to take flight by an Irish indentured servant named Heddy and two others enslaved by Mumford. During their trip, At Montauk Point Long Island Heddy stole their supplies, and Venture went back to enslavement. A newspaper advertisement placed by his enslaver in April 1754 confirms this account and offers the only contemporary physical description of Venture: “he is a very tall Fellow, 6 feet 2 Inches high, thick square Shoulders, Large bon’d, mark’d in the Face, or scar’d with a Knife in his own Country.”

In 1754, Venture and Meg welcomed their daughter Hannah. Less than a month later, Venture was separated from his family when he was sold to Thomas Stanton in Stonington-point, Connecticut. Venture convinced his new enslaver to purchase his wife Meg, but Venture’s relationships with the Stantons were marked by betrayal and violence. At one point around 1760, Venture intervened in a conflict between his wife and Mrs. Stanton. His enslaver retaliated by clubbing him brutally and stealing the money he and Meg had been saving up to purchase their freedom. Venture complained to a local justice of the peace to no avail. Ultimately, Venture was sold to Oliver Smith, a small-scale Stonington merchant, and they reached a deal whereby Venture earned the money to purchase his freedom through various kinds of work, including cutting vast amounts of cordwood.

Venture and Meg had two more children, Solomon in 1756 and Cuff in 1761. After purchasing his freedom for 71 pounds and two shillings, Venture took Smith’s last name for himself and his family, in honor of the one enslaver who did not betray or cheat him.

Venture spent his first years as a free man living and working in Long Island, New York, with the hope of purchasing his family’s freedom. Thomas Stanton still had Meg and their two sons, and a member of Mumford family had their eldest child, Hannah. He earned money by cutting wood, fishing, and even going on a whaling voyage. Over a six year period, he purchased his two sons, his pregnant wife, and his daughter Hannah from the Maafa (slavery). Solomon, the eldest son, died aboard a whaling ship, and the new baby was named Solomon Jr., in memory of his deceased brother. Cuff, the middle son, enlisted in the Continental army when he was in his early twenties. After the war, he returned to his family in East Haddam Neck, Connecticut.

Venture also invested in land. In 1770, he bought a 26-acre parcel that bordered the farm of his former enslaver Thomas Stanton. (That area is now the Barn Island Wildlife Preserve.) In 1775, he used proceeds from the sale of this land to purchase a small piece of land on Haddam Neck, Connecticut, where he cut lumber. Within a few years, his land in Haddam Neck grew to over 100 acres. There, he pursued a variety of entrepreneurial activities–farming, lumbering, fishing, and working as a small-scale trader along the Connecticut River and the east end of Long Island Sound. He made a living by fishing, whaling, farming his land, and trading in the Long Island basin.

In his latter years, Venture suffered from blindness and ill health. In 1798, he related a narrative of his life to a local schoolteacher, and with his family had it printed by The Bee, in New London, CT. This book was unique because it was the only historical narrative about an enslaved life at the time to describe a childhood in Africa.

Venture Smith died on September 19, 1805, at the age of seventy-seven. He is buried at the First Church of Christ cemetery in East Haddam, Connecticut, now a site on the Connecticut Freedom Trail. Alongside him are buried his wife Meg, who died several years later, and other members of their family. Venture’s gravestone, which can be seen there to this day, was carved by John Isham, a well-known carver in the region. It describes him as “Venture Smith, African. Tho the son of a King he was kidnapped and sold as a slave but by his industry he acquired Money to Purchase his Freedom.” Since then, he has been widely remembered in the region for his industry, integrity, and successes.

Venture is referenced in the 1971 film Let’s Scare Jessica to Death, by the title character, who makes a gravestone rubbing of Smith’s headstone, and later reads it to her husband.

Watch a short video, The Life of Venture Smith, adapted from Africans in America, on PBS.