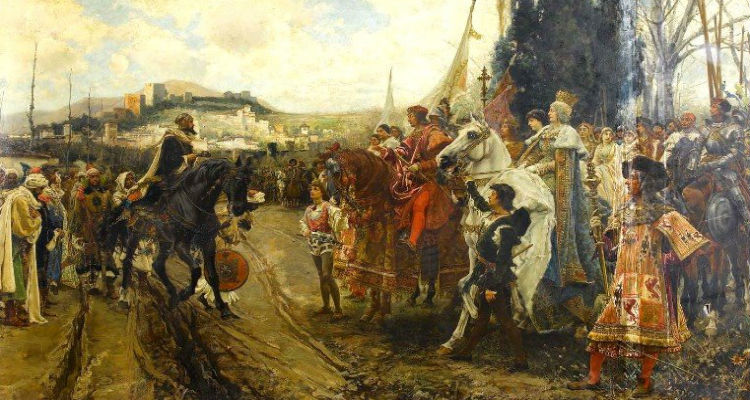 On January 2, 1492, Moorish rulership of Spain came to an end when, Boabdil, the leader of the last Moorish City “Granada”, surrendered to armies of a recently united Christian Spain (after the marriage of Ferdinand II of Aragon and Isabella I of Castile). This ended the 700-year reign of the Moors in Iberia.

The united Christian forces had surrounded the city of Granada and blockaded it for eight months. Eventually, on 2 January 1492, Granada was surrendered. The young Abu `Abdallah Muhammad XII (“Boabdil” to the Spaniards) handed over the keys to the Spanish sovereigns.

A private letter written by an eyewitness to the bishop of León only six days after the event recorded the scene:

The Moorish sultan with about eighty or a hundred on horseback very well dressed went forth to kiss the hand of their Highnesses. According to the final capitulation agreement both Isabel and Ferdinand will decline the offer and the key to Granada will pass into Spanish hands without Muhammad XII having to kiss the hands of Los Reyes, as the Spanish royal couple became known. The indomitable mother of Muhammad XII insisted on sparing her son this final humiliation.

Boabdil was also known as “Ez-Zogoiby,” “the Unlucky.” It is said that he was ever lamenting his evil star, against which he felt it was useless to struggle. “Verily,” he would exclaim, after every reserve, “it was written in the book of fate that I should be unlucky and that the kingdom should come to an end under my rule!”

Legend has it that as the royal party moved south toward exile, they reached a rocky prominence which gave a last view of the city. Boabdil reined in his horse and stood and gazed back upon the kingdom he had lost: the beautiful Vega, the towers of Alhambra, and the gardens of the Generallife; all the beauty and magnificence of his lost home. “Allahu Akbar,” he said, “God is most great,” as he burst into tears. When his mother, Ayesha, approached him, she said: “Weep like a woman for what you could not defend as a man”.

The spot from which he looked for the last time on Granada is known as “the Moor’s last sigh” (el último suspiro del Moro). A stone marker to the “Moor’s sighs” still commemorates the spot.

Among those who witnessed the surrender was Christopher Columbus, who was in attendance in his quest for royal sponsorship of his projected voyage of discovery into the Atlantic.

He refers to the surrender on the first page of his Diario de las Derrotas y Caminos:
“After your Highnesses ended the war of the Moors who reigned in Europe, and finished the war of the great city of Granada, where this present year [1492] on the 2nd January I saw the royal banners of Your Highnesses planted by force of arms on the towers of the Alhambra, which is the fortress of the said city, I saw the Moorish sultan issue from the gates of the said city, and kiss the royal hands of Your Highnesses…”

Under the terms of the capitulation, the conquered Moors were guaranteed their customs, property, laws and religion; and could keep their own officials, to be supervised however by Castilian governors. The Moors lingered in Spain for a little more than a century.

However, on March 31, 1492, Isabella signed the edict ordering the expulsion of Jews.

“From the moment the ink had dried on that order, the fate of the Moors was also sealed. It would only be a matter of time before their turn came to be forcibly expelled. And it did come ten years later. This precedent established a tradition of treachery and racism that was adopted by all the European colonizers who came in the wake of the Spanish…” –Jan Carew

In 1496, to appease Isabella, King Manuel of Portugal announced a royal decree banishing the Moors. The Spanish King Phillip lll expelled the remaining Moors or Moriscos. The Moriscos were descendants of Spain’s Muslim population that converted to Christianity under threat of exile or death. They left Spain between 1492 and 1610. It is said that no less than three million Moors were banished.

“By 1610, through expulsion and migration, a million, among them many Jews, had returned to northern Africa and western Europe.”

An estimated one million Moors settled in France. Others moved into Holland. By 1507, there were numerous Moors at the court of King James IV of Scotland.

“The misguided Spaniards knew not what they were doing. The exile of the Moors delighted them… Lope de Vega sang about the sentencia justa by which Phillip lll, despreciando sus barbaros tesoros,banished to Africa las ultimas reliquias de los Moros… They did not understand that they had killed their golden goose. For centuries Spain that been the center of civilization, the seat of arts and sciences, of learning, and every form of refined enlightenment. No other country in Europe had so far approached the cultivated dominion of the Moors. The brief brilliancy of Ferdinand and Isabella, of the empire of Charles V, could found no such enduring preeminence. The Moors were banished; for a while, Christian Spain shone, like the moon, with a borrowed light; then came the eclipse and in that darkness, Spain has groveled ever since.” ~Stanley Lane-Poole

The very year that the Moors were defeated Columbus journeyed to the West Indies.

“The voyages of Columbus mark a starting point of world capitalism and the beginning of European colonial domination of the world.” –John Henrik Clarke

Here is an Article of Agreement between the Sovereigns of Spain and Christopher Columbus, April 17, 1492:

“The things prayed for, and which Your Highnesses give and grant to Don Cristobal Colon as some recompense for what he is to discover in the Oceans, and for the voyage which now, with the help of God, he has engaged to make therein in the service of Your Highnesses, are the following.
Firstly, that Your Highnesses, as actual Lords of the said Oceans, appoint from this date the said Don Cristobal Colon to be your Admiral in all those islands and mainlands which by his activity and industry shall be discovered or acquired in the said oceans, during his lifetime, and likewise, after his death, his heirs and successors one after another in perpetuity, with all the preeminences and prerogatives appertaining to the said office…

Likewise, that Your Highnesses appoint the said Don Cristobal Colon to be your Viceroy and Governor-General in all the said islands and mainlands…which, aforesaid he may discover and acquire in the said seas…

Item, that of all and every kind of merchandise, whether pearls, precious stones, gold, silver, spices and other objects of merchandise whatsoever, of whatever kind, name and sort which may be bought, bartered, discovered, acquired and obtained within the limits of the said Admiralty, Your Highnesses grant from now henceforth to the said Don Cristobal Colon, and will that he may have and take for himself, the tenth part of the whole, after deducting all the expenses which may be incurred therein, so that of what shall remain clear and free he may have and take the tenth part for himself, and may do therewith as he pleases, the other nine parts being reserved for Your Highnesses.”

Source:
The Story of the Moors in Spain by Stanley Lane-Poole
https://en.wikipedia.org/wiki/Muhammad_XII_of_Granada