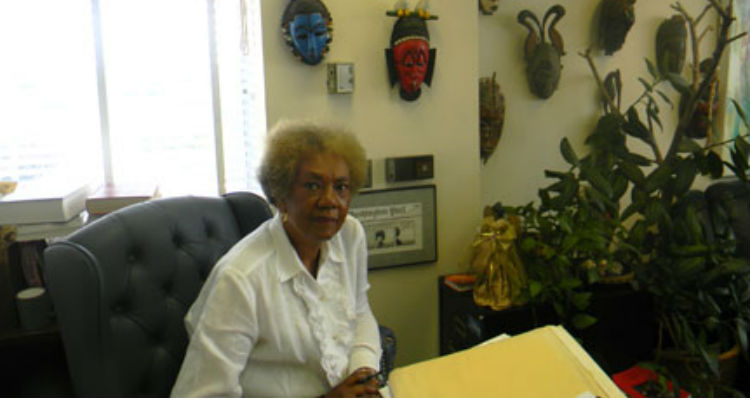 Dr. Frances Cress Welsing was a third-generation physician specializing in general and child psychiatry. Her book, The Isis Papers: The Keys to the Colors, was the culmination of over 18 years of research and analysis based in part on the treatment of African-Americans in her private practice. The book is a collection of essays, analyzing racism and its delirious effects. Each essay reveals a facet of the global system of European domination heretofore unrecognized. Dr. Cress Welsing probes the symbol structure of the European supremacist system to reveal the psychological dynamics of racism.

Here are quotes from The Isis Papers:

“Racism…is a universal operating system of [whyte] supremacy and domination in which the majority of the world’s [whyte] people participate.”

-pg3, “The Cress Theory of Color-Confrontation and Racism”

“[Pale] skin is a form of albinism. There is no difference, microscopically speaking, between the [pale] skin of a [whyte] person and the skin of a person designated as an albino.”

“Historically, [whyte] males worldwide have suffered the deep sense of male inferiority and inadequacy because they represent a mutant, genetically recessive, minority population that can be genetically annihilated by all [non-whyte] people.”

“Constantine l, the Roman Emperor..made Christian worship lawful in the beginnings of the [whyte] supremacy system, had the following words placed on the cross, “In Hoc Signo, Vinces” (meaning, “In this sign you will conquer”). …Currently, the majority membership of Christian churches is [non-whyte], and all are held in control under the sign of the cross.”

“Once we become aware of the deep humiliation that is apparently felt by [whytes] because of their skin [paleness] (due to the genetic mutation to albinism) and because of their genetic vulnerability when compared to [non-whytes], it is possible to understand the historically degraded status of sex in the [whyte] supremacy system/culture.”

“The gun as a symbol in the [whyte] supremacy system/culture…cannot be banned because it is the symbolic phallus substitute for the [whyte] male. The [whyte] male’s penis and testicles genetically cannot annihilate Black and other [non-whyte] males, but his gun can. Therefore to ban the gun for the [whyte] male is to castrate him symbolically, to remove his defense mechanism for the ever-present threat of [whyte] genetic annihilation.”

“(Melanin is the black pigment which permits skins to appear other than [pale])…Melanin is a superior absorber of all energy. The fact that the [whytes] lack melanin may also help to explain why they have quite a different concept and understanding of God…and why, in the view of many [non-whyte] peoples, they ([whytes]) lack “spirituality” and the capacity to tune in to, and thereby establish harmony and justice in the universe. Because they lack the melanin sensory system, they cannot intuit that ALL is ONE.”

-pg 183, “The Symbolism, Logic and Meaning of Justifiable Homicide in the 1980s”

“Black females must understand that we always will be oppressed, as will our sons and daughters unless Black men are liberated to defend themselves, Black females and Black children from any and all attacks and insults… The first lessons to Black Women were harsh and cruel ones of sexual assault and abuse, taking their children away and forcing them to watch their men being lynched and castrated. But then these harsh lessons were followed by milder treatment of Black women as compared to Black men. Black women were given extra food, money, clothing and other gifts for their special favors to the [enslavers]. They were rewarded for correctly teaching their children to conform to the enslaver’s wishes, as well as for telling their men to calm down and be patient so that they too could be rewarded.”

“The facts of our true identity are that we, as Black people, are persons whose dominant genetic and historic roots extend to Africa, ‘the land of the Blacks’. Africa was the birthplace of humankind and that for many hundreds of centuries thereafter Africans, meaning Black people, were in the forefront of all human progress. As John Henrik Clarke states, ‘It can be said with a strong degree of certainty that Africa had three Golden Ages. The first two reached their climax and were in decline before Europe as a functioning entity in human society was born.’ BLACK WOMEN AND BLACK MEN ARE THE PARENTS OF THE ENTIRE FAMILY OF PEOPLE -black, brown, red, yellow and [pale] varieties.”

“Critical in the history of white supremacy was the decision not to control Black and other women of color, but to control the men of color… Thousands upon thousands of Black men in the U.S. were lynched and castrated to drive home the message that [whyte] men intended to control the “balls” in this world, both on and off the court! [Whyte] males understood that they needed [whyte] women as well as Black women to help them achieve and maintain this power relationship. [Whyte] women always have known what they stood to gain – their own survival as [whytes]. Black women have been confused and less clear in fully understanding how they have been led to cooperate in this deadly power game of [whyte] supremacy. Further, Black women do not understand fully that they have nothing to gain and everything to lose if this deadly game continues.”

7 things you would have learned if you read ‘The Isis Papers’ by Dr. Frances Cress Welsing

The Biggest LIE Starts with That Race Label…
For the Very Darkest and Lightest of A Brown Skin People….

Would like permission to repost this article on my blog, http://racismws.com/
my email: racismws@gmail.com

You are welcome too… Thank you.

Thank you. She was a great lady. Of course, I’ll link the article to your site. By the way, excellent site!

So is yours, Trojan Pam! Excellent!

So grateful for having been in the presence of Dr. Welsing at least three times before she transitioned. One was a fairly intimate occasion where I received an autographed copy of the Isis Papers.

Now these many years after she first introduced us to melanin on the television show For The People with Listervelt Middleton we stand on the threshold of infinity. Who would have thought that at this moment in time melanin would be worth more than gold? Not only that we can attain a Melanin Tipping Point where we go from healing to healed. In the 21st century a concept like the Ubuntu paradigm is completely attainable. All it requires is at least 780 million people becoming enheightened with awareness melanin is worth more than gold. At that point we will begin Mchakato wa Uponyaji the process of healing.