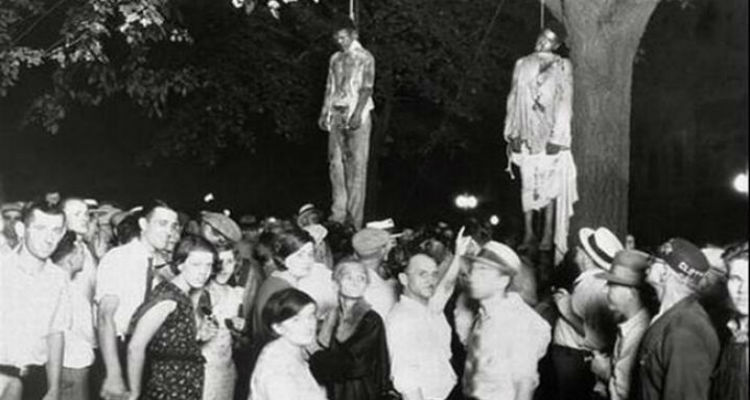 Thomas Shipp and Abram Smith were two African American men who were lynched on August 7, 1930, in Marion, Indiana, after being taken from jail and beaten by a mob. They had been arrested as suspects in a robbery, murder and rape case. A third African American male, 16-year-old James Cameron, had also been arrested and narrowly escaped being killed by the mob; he was helped by the intervention of an unknown woman and returned to jail.

The photo of the lynching was the inspiration for the poem “Strange Fruit” which was later put to song and popularized by Billy Holiday. When Abel Meeropol, a Jewish schoolteacher from New York saw a copy of the photo of the Shipp-Smith lynching in a magazine, it so “haunted” him that he penned a poem “Bitter Fruit”. It was published in 1937 before being set to music, and renamed as “Strange Fruit”. The song would become an early anthem for the civil rights movement.

“Southern trees bear strange fruit
Blood on the leaves
Blood at the root
Black bodies swinging in the southern breeze
Strange fruit hanging from the poplar trees
Pastoral scene of the gallant south
The bulging eyes and the twisted mouth
The scent of magnolia sweet and fresh
Then the sudden smell of burning flesh
Here is a fruit for the crows to pluck
for the rain to gather
for the wind to suck
for the sun to rot
for the tree to drop
Here is a strange and bitter crop.”

On Aug 7, 1930, a large whyte mob broke into a jail with sledgehammers, pulled out the three suspects – Thomas Shipp, Abram Smith and James Cameron – who were arrested and charged with robbing and murdering a whyte factory worker, Claude Deeter, and raping his whyte girlfriend, Mary Ball, who was with him at the time.

The mob brutally beat them, and dragged them to a tree on the courthouse square. They had a noose put around their necks and were then pulled up into the tree. Shipp, who is said to have confessed killing the whyte man, was hanged from an elm tree. Smith, who Ball identified as her assailant, tried to free himself from the noose as his body was hauled up, he was lowered and men broke his arms to prevent any other efforts to free himself. Police officers in the crowd cooperated in the lynching. At the last minute the mob spared Cameron, the youngest of the trio, thanks to an unidentified woman who said that the youth had nothing to do with the rape or murder.

A local studio photographer, Lawrence Beitler, took a photograph of the dead men hanging from the tree surrounded by the large lynch mob, which included women and children. He sold thousands of copies of the photograph in the next ten days.

Mary Ball later testified that she had not been raped. According to Cameron’s 1982 memoir, the police had originally accused all three men of murder and rape. After the lynchings, and Mary Ball’s testimony, the rape charge was dropped.

James Cameron was tried in 1931 as an accessory before the fact, convicted and sentenced to state prison for several years. After being released on parole, he moved to Detroit, worked and went to college. In the 1940s he worked in Indiana as a civil rights activist and headed a state agency for equal rights. In the 1950s he moved to Wisconsin. There in 1988 he founded America’s Black Holocaust Museum, for African-American history.

Mrs. Flossie Bailey, a local NAACP official, and the State Attorney General worked to gain indictments against leaders of the mob in the lynchings, but were unsuccessful. No one was ever charged in the murders of Shipp and Smith, nor the assault on Cameron.