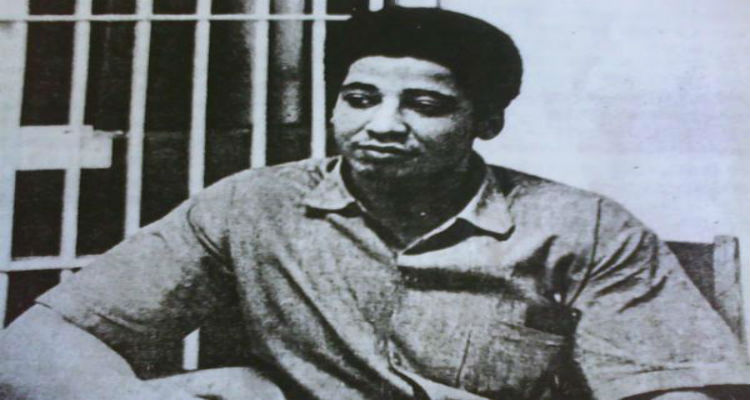 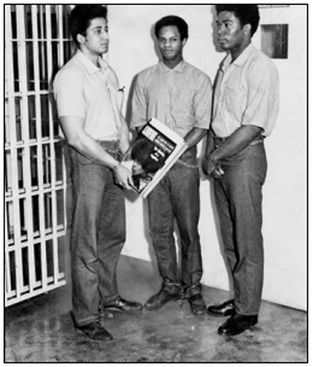 The Soledad Brothers were three African-American men charged with the murder of a white prison guard at California’s Soledad Prison on January 16, 1970. George Jackson, Fleeta Drumgoole and John Clutchette were said to have murdered the guard in retaliation for the shooting deaths of three Black prisoners during a prison fight in the exercise yard three days prior by another guard.

Racial hostility was fostered and encouraged by the authorities, at Soledad prison, who kept prisoners in the maximum security wing under rigid racial segregation. However, despite the extreme tension, on January 13, 1970,  14 Blacks and 2 white prisoners from the maximum-security wing were released into a new recreation yard for the first time in several months. No guard went with the prisoners into the yard. But one, widely known for his marksmanship, stood armed with a carbine rifle in the guntower overlooking the yard. What happened next is unclear. According to prison authorities, a fist fight broke out. The guard immediately fired four shots, killing three Black prisoners and wounding one white. No alarm whistle was sounded, no warning shot heard, no tear gas thrown.

Following the incident, thirteen Black prisoners began a hunger strike in the hopes of securing an investigation. On January 16, 1970, a Monterey County grand jury convened, and called the murder of Nolen, Edwards, and Miller, “justifiable homicide”. No Blacks were permitted to testify, including those who had been in the recreation yard during the shooting. Within thirty minutes after the grand jury’s ruling was broadcast on the prison radio, a white prison guard was found dying in another maximum-security wing of the prison, having been beaten and thrown from a third-floor tier to the television room below.

The Deputy Superintendent of the prison labeled the killing an act of revenge for the earlier murders. All the prisoners of Y wing who had been out of their cells, were immediately locked in isolation. With promises of early parole and threats of long confinement in the foreground, the district attorney and prison officials interrogated the inmates. After eight days of pressure, they claimed to have found the guilty men, George L Jackson, Fleeta Drumgo, and John Wesley Clutchette were indicted by the Monterey County grand jury for first-degree murder, and held in solitary confinement.

George L. Jackson was twenty-eight years old. Ten years before the incident he pleaded guilty to second-degree robbery charges, believing that such a plea would result in a lighter sentence. He was given an indeterminate sentence of “one year to life.”  Jackson was charged not only with murder but with assault under Section 4500 of the penal code. This section imposes a mandatory death penalty on an inmate serving a life sentence who is convicted of assaulting a non-prisoner. John Clutchette was twenty-three years old and had spent the last three years in prison for burglary. His parole date had been set for April 28th, 1970. Fleeta Drumgo, twenty-four, had been in prison for five years, also on burglary charges. His next parole hearing was also set for April and his chances for release were excellent. However, both men were now facing possible death sentences on charges of murder and assault. 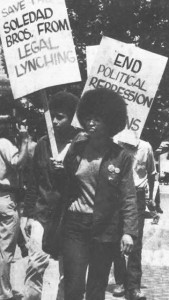 During the twenty-nine days the defendants were held in solitary confinement following the incident at Soledad, they were not told of the charges. Bewildered by their isolation, suffering from cold and inadequate ‘food, they tried to get word of their plight to their families in Los Angeles. Their letters were censored and returned to them because officials were displeased with the contents. The accused men were brought in chains and shackles to two secret hearings in Salinas County. A third hearing was about to take place when John Cluchette managed to smuggle a note to his mother: “Help, I’m in trouble.” When the worried families called the prison, officials told them: “don’t bother to come” to the hearing at which the inmates would be charged. Authorities also told the families there was no need to get lawyers for their sons.
However, with the aid of a state senator, Cluchette’s mother contacted a lawyer, and so commenced one of the most extensive legal defenses in U.S. history. According to their attorneys, Jackson, Drumgo, and Clutchette were charged with murder not because there was any substantial evidence of their guilt, but because they had been previously identified as Black militants by the prison authorities. 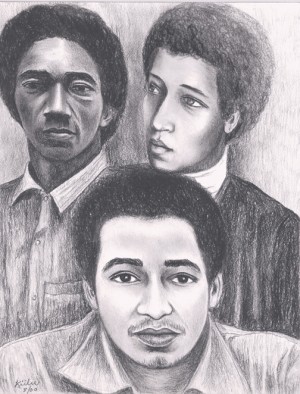 Then on August 7th of that year, 17-year-old Jonathan Jackson, brother of author George, invaded a California court hearing for three Black San Quentin prisoners. He handed them weapons and abducted five hostages, including the judge, demanding that the Soledad Brothers be released within thirty minutes. They successfully commandeered the group to a waiting van and were about to pull out of the parking lot when Marin County Police and San Quentin guards opened fire. Jonathan, two prisoners, and Judge Haley were all killed in the gunfight.

Angela Davis was held responsible for purchasing the guns used in the hostage situation. Because the guns were owned by her, Davis was indicted on charges of murder, kidnapping and conspiracy. She went into hiding and became the object of a nationwide search. Two months later, she was captured by the FBI in a New York City motel and extradited back to California. Davis was later tried and acquitted of charges in connection with the escape.

On August 21, 1971,George Jackson was shot to death by a tower guard inside San Quentin Prison in a purported escape attempt. “No Black person,” wrote James Baldwin, “will ever believe that George Jackson died the way they tell us he did.”

On March 27, 1972, the two surviving Soledad Brothers—Clutchette and Drumgoole—were acquitted by a San Francisco jury of the original charges of murdering a prison guard.

The Art of Bryan Collier