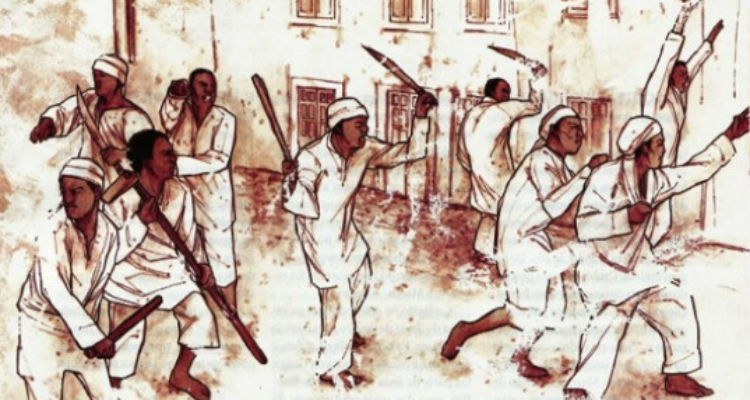 The most outstanding Maafa (Atlantic slavery) revolutionary movement in Brazil were the series of Islamic risings in Bahia from 1808 to 1835. The Malê uprising was the most important. Well organized by mostly enslaved Muslims both in the city and on the plantations, it was eventually uncovered before it could fully developed. However, enough freedom fighters obtained arms that deaths were numerous and destruction to property was extensive. More than a hundred enslaved Muslim were executed.

In the early nineteenth century about eight thousand to ten thousand Afrikans a year were arriving at the docks of Salavador. Between two-thirds and three-fourths of these Afrikans came from the Bight of Benin or what the Portuguese called the Mina Coast. In 1806, for example, 8,037 Minas were brought to Bahia compared to 2,588 Afrikans from Angola and Benguela. A large number of the Minas were from nations that were called in Bahia, Nago (Yoruba), Gege (Aja-Fon) and Ussa or Aussa (Hausa). To some extent, these ethnic designations were colonial creations because they did not recognize Afrikan political and religious differences. Although the Nagos all spoke Yoruba, they came from different and often hostile polities. The Hausas were also divided by regional origins and religious difference.

The process of Islamization of the Hausa people had been violent. Torodbe Fulani Shehu Usumanu Dan Fodio initiated a jihad in Hausaland in 1804 that resulted in the creation of large areas under Fulani control. The fighting lasted six years and produced large numbers of defeated captives, Muslims and non-Muslims who were sold into the Atlantic slave trafficking, mostly through the port of Lagos. Eventually the Islamic expansion also set off a series of wars within the Yoruba nations, which generated thousands of prisoners sold into the Atlantic slave trafficking.

In Bahia, the Hausas were observed to be “very black, tall, muscular and very daring.” It was recognized that most Hausa men were physically strong and less willing to resign themselves to captivity. The Hausa began to resist their enslavement as early as 1806. A conspiracy was discovered in which Hausas in the city had elected a “governor” who with the aid of a freedman as his secretary had begun to establish contacts with other Hausas. Another account noted that “captains” had been appointed in each of the city’s district. Arms had been gathered and the rising coordinated with bondpeople (enslaved people) in the city and on the plantations, set to take place on Corpus Christi, when vigilance would probably be lax. The Portuguese governor acted quickly by arresting and executing the leaders and publicly flogged ten bondpeople. A curfew was imposed on all the bondpeople of the city and even the movement of freed persons was curtailed.

During this period a group of Hausa fled Salvador and formed a quilombo. In early January 1809 about three hundred Hausa and some Nagos attacked the interior town of Nazareth das Farinas which was repressed with much bloodshed by the militia army. Hundreds of freedom fighters who tried to join the rising were intercepted. Ninety five were captured and exemplary punishments were meted out once again.

In 1810 came another plantation uprising of enslaved Muslims; and in February 1814 a major uprising erupted at the whaling and fishing stations of Itapoa. A group of 250 freedom fighters from a nearby quilombo attacked the stations and raised the bondpeople employed there in revolt. With shouts of “Freedom,” and “Deaths to the whytes and mixed-race people” they burned the station and killed between fifty and one hundred people, and burned over one hundred houses. The rising was led by a Hausa malam, or Muslim preacher, who inspired the freedom fighters to march towards Reconcavo, the heartland of the sugar plantations. They were intercepted by a Portuguese militia troop sent from Salvador, which killed some fifty freedom fighters in the battle. Other freedom fighters hanged themselves in despair. Many were arrested and subjected to brutal and exemplary punishments, but others escaped into the woods and formed a new quilombo.

Five other uprising took place between 1816 and 1835, in both the countryside and the city. In 1830, for example, 20 armed bondpeople attacked an urban slave market and freed one hundred newly arrived Afrikan captives.

Over time, however, the Nâgo would made up a majority of Muslims in Bahia due to the rise of Islam in Yoruba kingdoms. Thus many Muslims were called Malê, from Yoruba imale that designated a Yoruba Muslim.

Six months before the 1835 rising, the Portuguese colonizers had received some information that an uprising was brewing. Malam Bubakar Ahuna, a leading Muslim scholar throughout Bahia, who organized Muslim community events, was exile. Despite this, the plans for the rising had been finalized and distributed to Muslims throughout Bahia.

The revolt was to take place after the fajr (dawn) prayer on January 25th, 1835, which was the 27th of Ramadan, 1250 in the Muslim calendar. Some Muslims consider the 27th to be the most probable date for Laylat al-Qadr, the Night of Power, when the Quran was revealed to Prophet Muhammad. The Muslims of Bahia chose this date in the hopes that the heightened spiritual state of the community would lead to greater chances for success.

However, due to various incidents, it was forced to start before the planned time. On Saturday the 24th, bondpeople began to hear rumors of an upcoming uprising. While there are multiple accounts of freed Blacks telling their previous enslavers about the revolts, only one reported it to the Portuguese colonizers, who took the necessary precautions: the palace guard was reinforced, the barracks were alerted, the night patrol was doubled, and boats were ordered to watch the bay. At around 1:00 AM on Sunday the home of a man was searched as it was reported that there were Afrikans meeting in his house. However, the freedom fighter were able to overpowered the justice of the peace and a police lieutenant, and begin the revolt.

Throughout the night approximately six hundred freedom fighters ran through the streets fighting and destroying a number of municipal buildings. Several people were injured and at least one killed. After securing the area, the freedom fighters split up to go in different directions throughout the city.

However, the largest group traveled toward Palace Square to attack the jail, attempting to free a Muslim leader, Pacifico Licutan. Under heavy fire, they had to withdraw from the prison and retreat to the Largo de Teatro. When reinforcements arrived, they attacked a nearby post of soldiers in order to take their weapons. They marched toward the barracks and put up a brave and courageous fight, however, the soldiers were able to pull the gate guarding the barracks shut. After failing to take several more key positions, the freedom fighters decided to go to Cabrito, the designated meeting spot.

However, in between Cabrito and Salvador da Bahia was the Brazilian cavalry. And when they met in Água de Meninos, the most decisive battle of the revolt took place.

Leadership
Ahuna – Ahuna was an enslaved Nagô who lived in Salvador. He traveled frequently to Santo Amaro where his enslaver had a sugar plantation. It has been suggested that his presence was a key factor in the timing of the rebellion.
Pacífico Lucatan – Lucatan was an enslaved Nagô who worked as a tobacco roller. He was in prison at the time of the rising, and one of the main goals was to free him.
Luís Sanim – Sanim was an enslaved Nupe who also worked as a tobacco roller. He ran a fund where each member contributed a day’s wages for enslaved labor, presumably monthly, and this money was divided into three parts: one part for cloth to make Muslim garments; a part to enslavers’ portions of wages—since enslaved Malês did not work on Fridays; and one part to help buy letters of manumission.
Manoel Calafate – Calafate travelled to Santo Amaro to mobilize freedom fighters on the eve of the uprising. He took an active part in the fighting and appears to have been killed in Palace Square.
Elesbão do Corma – Elesbão do Corma was a Hausa freedman who was known in the African community as Dandará. He owned a tobacco shop which was also used as a meeting place for Malês. He also traveled through the Recôncavo for his business, and brought the Muslim faith to slaves on the plantations there.

Fearful that the whole state of Bahia would follow the example of Saint-Domingue (Haiti) and rise up and revolt, the authorities quickly sentenced four of the freedom fighters to death, sixteen to prison, eight to forced labour, and forty-five to flogging. The remainder of surviving leaders of the revolt were then deported back to Africa by the colonizers; it is believed that some members of the Brazilian community in Lagos, Nigeria, Tabom People of Ghana are descended from this deportation, although descendants of these exiled Afrikan-Brazilian are reputed to be widespread throughout West Africa (such as Sylvanus Olympio, the first president of Togo).

The remaining Malês were watched by the Brazilian colonizers very carefully and in subsequent years intensive efforts were made to force conversions to Catholicism. However, the African Muslim community was not erased overnight, and as late as 1910 it is estimated there were still some 100,000 Afrikan Muslims living in Brazil.

Source:
Slavery in Brazil by Herbert Klein and Francisco Vidal Luna
Freedom by a Thread: The History of Quilombos in Brazil edited by João José Reis and Flávio dos Santos Gomes.
https://en.wikipedia.org/wiki/Mal%C3%AA_Revolt
http://lostislamichistory.com/the-bahia-muslim-slave-revolt/

Slave Rebellion in Brazil: The Muslim Uprising of 1835 in Bahia by João José Reis (1993)